In August I asked:  Will Reviews Become Google’s First Successful Foray into Social? It struck me at the time that reviews were Google’s strongest and most successful play into the social world. Google had succeeded with Places to garner a significant number of reviews and with the owner review response feature to garner a strong, albeit sometimes, bizarre interaction between reviewers and owners. This dynamic had all the elements of a successful social site.

Google is now building out the strong social nature of their review process with Google Hotpot, a stand alone site and a recomendation engine available in Maps, Places and Mobile. The product, noted as an early release, will offer suggested Places that you will like based on your previous reviews as well as the Places that are liked by your friends.

Since it is a recommendation engine, it will reward the viewer with better information for having written reviews or having friends or both thus making it functional out of the starting gate even without a large friend participation.

If you are friended it will also send you an email notifying you:

Subject: Matthew McGee wants to share recommendations with you on Google Places

Matthew has added you as a friend on Google Places — a smarter way to discover places you’ll love. Add Matthew back to see new recommendations in Google search results, on Google Maps, and on your mobile phone.

Add Matthew as a friend

Google Places is powered by Hotpot, our new local recommendation engine. Every time you rate places on Google, we’ll customize your search results with new recommendations based on your unique tastes. Adding friends whose opinions you trust makes your recommendations even better. Start building your own guide to the world at google.com/hotpot.

The recommendations are not just around entertainment or restaurants but around ALL places and are based on your preferred location identifed in Google search. Like all recommendation engines in their early stages without enough real data, results can tend toward the bizarre.

For example it provided me, an staunch non-believer, with suggestions for the local Catholic school and a local church. Perhaps Google is sending me a message. But then what would one think about the recommendation for my own business or a local motel? 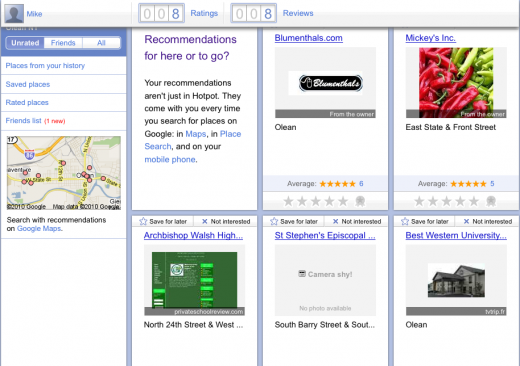 This move makes sense of a number of earlier changes that in and of themselves did not make a lot of sense. Hotspot puts their early 2010 addition of Nearby Places of competitors into the Place Page in perspective as well as more recent moves of tightening down privacy in the review process and making your search location choice more visible on the desktop. All necessary to make Hotspot more accurate.

Google has long been working on the separation of Places and Maps. This is as much to give Places a more visible platform as it is to give Maps the freedom to experiment with more social layers without negatively affecting “the franchise”. Latittude, Buzz and now Hotspot are all integrally tied to the Maps platform. Maps offer them an underlying geo awareness for the data as well as a display layer that is visually intuitive.

These social moves leverage Google’s strong Mapping technology AND their successful Places data set without the intense pressure of being on the front page of the Google results. Like Buzz & Lattitude, Hotspot will exist in the relative obscurity of Maps and the Places Pages. Google separated Places from Maps after 6 years of development and refinement. Hotspot, like Places, will have the opportunity to develop in much the same way.

But even the “hidden” nature of Maps has a relatively high profile with 3 times the traffic of Yelp. Google’s every move is compared to Facebook. So while Google is attempting to get these layers functioning at scale they will be under a fair bit of scrutiny.

Will Hotpot succeed? Time will tell. It is clear to to me that Hotspot like Places & Buzz are not perceived within Google as stand alone products but clearly, part of a larger plan that includes local, mobile and at some point the main Google SERPS. Maps is an environment where it can get tested, tweaked and improved.

Okay, I had to check both your site and Google’s site a few times to believe this, but I think the name is actually HotPOT. FWIW, I think your name makes a lot more sense. Do you think they made a typo and no one ever caught it? 🙂

I think Google did make a typo. 🙂 I think that would make a great article title: Google Misnames New Recommendation Engine

The name “HotSpot” would have made more sense, in my opinion (it’s actually HotPOT). But regardless of naming issues, I played around with this last night & think it has a serious opportunity to succeed. I see it as more of a reaction to Facebook than an internally-generated product but in some sense the simplicity and focus on businesses / suggestions is much more successful than what Facebook has yet done with Places.

@David
Hotpot? Sheesh, I woke at 3 and saw, figured I better write about it. So bleary eyed I sallied forth and read it as hotspot. But now even after you pointed out my error, I still think it should be Hotspot…. What does hotpot mean?

Regardless thanks for the correction.

Yes it very well could work because its goal of recommendation leverages core Google strengths data and heavy duty processing rather than a pure social model.

Similar to the Bing / Bling misnaming…

@David
Does the Onion have a writing spot open?

The review form looks a lot like the screenshot from the Google patent filing I wrote about in Oct., 2009 (http://www.seobythesea.com/?p=2949), on how Google might try to make online reviews easier.

Glad they replaced “ambiance” with “atmosphere,” though.

The name would be better suited for a medical marijuana shop or a Japanese noodle house. Odd choice indeed.

I’ve been playing around with it this morning and see a funny ‘bug’ in numerous florist listings:
Cuisine: FTD

In looking at the Place Pages for those businesses, it appears the line is showing as a result of data imported from Yahoo listings under the “Specialties” heading.

No doubt, we’ll be seeing some odd categories as G refines the recipe for this hotpot.

This is the most compelling “social” UI yet from Google. But integration with relevant friend-generated data is where the rubber meets the road.

Does anyone know if Google and Facebook have any type of deal to share social relationships? I know they are not the best of friends so maybe that is a non-starter. What ever happened to Open Social?

@ David – I agree that this is a much better attempt than Facebook’s Places but how does this succeed (beyond the success they already enjoy via Maps/Places) unless users are willing to replicate the social graph they have already created in Facebook?

I am not sure that they need to win at the social graph for this to be successful…. they need to get enough data to become a very good recommendation engine not be a great social site.

That data comes from reviews, your browsing history, an analysis of each Place and not just your friends. They just need enough friends to be able to correctly triangulate an answer using all of the data points.

It’s the answer Google wants not the process. If they succeed at the social side all the better but they will be able to use the information to improve search, regardless.

So far as I know, a ‘hotpot’ is a Mongolian cooking implement, sometimes also called a ‘firepot’ out of which everyone eats communally. If you look at it that way, I think the name could make sense: a collective source that everyone is dipping into.

I’m trying to get a handle on this new feature and find myself asking: is this needed? With the heavy adoption of Twitter-type places, don’t people just ask each other these kinds of questions via the existent forms of Social Media? Of course, the responses wouldn’t be instantaneous, so that would make Google’s product a bit different, but like you say, Mike, time will tell.

I like how you can just rate something and not have to review it. It certainly seems like it’s all a part of a greater social network, especially since the friends section seems to be tied to the gmail address book (similar to buzz). I am curious to see how this will affect rankings in local.

Do you think places pages will end up showing both “ratings” and “reviews” now..?

I am presuming that the ratings will integrate into the current star system but I am not sure.

@Miriam
Need is a funny word (as I tell my children). Google needs the data. As I noted to Ted, that data will improve search results. Whether the social aspects sticks or not is up to the Gods…

@ Mike
Your comment “they need to get enough data to become a very good recommendation engine not be a great social site” is spot on and may prove to be a very keen insight. Time will tell.

It makes success almost guaranteed. If they happen to get more social as a result, they will cope 🙂

[…] Hotpot, Google’s new recommendation engine for local, while still in its infancy is already influencing results in Places and Maps. In Maps, when a searcher sees a listing that has a review from a Hotpot friend, Google will surface that friend’s snippet in the list view. As such, in this case, it is the most relevant snippet I have ever seen in Maps view. It was surprising to “see a friend” and it was attention grabbing seeing Stever’s icon there. In that regard, it is very rewarding and likely to feed back into social success of Hotpot… […]

[…] sort of additional ego boost might just incent business owners to train their customers how to use Google Hotspot. If Google adds some ranking strength to the signal, business owners will be crashing down the […]

[…] the rollout of Hotpot and user ratings, Google appears to have made massive internal changes to their review process. […]

My Review Corpus is Bigger Than Your Review Corpus And Why It Matters | Understanding Google Maps & Local Search
April 11, 2011 at 7:28 am

[…] things started to change after the rollout of Hotpot. Google essentially democratized the review process and made providing a rating much […]

[…] has been a keystone city in Google’s Hotspot Hotpot Places marketing efforts. They inundated Portland businesses and individuals with high […]

[…] exploring feature has integrated a Hotpot like recommendation function. Google+Local will recommend places they “think you’ll like based on your reviews, […]