If likes are the new links then ratings are the new reviews. At least as far as Google is concerned as they continue to integrate elements from Hotpot into Places.

I noted the other day that Google was integrating HotSpot friend recommendations in personalized Map results. They are also now including a new rating level with an eye-catching Best Ever ribbon/icon from Hotpot on the Places Pages.

This sort of additional ego boost might just incent business owners to train their customers how to use Google Hotspot. If Google adds some ranking strength to the signal, business owners will be crashing down the gates to get the rating.

The new Google HotPot offers a more relaxed user feedback environment than Google Places, allowing for just a star rating and a quick sentiment (for hotels & restaurants) but also encouraging, although not requiring, a brief review.

Google Places has recently added the ability to add this simpler, quick Hotpot like star rating to businesses that show in the Related Places area of the Place page (When did they change the name from Nearby Places You Might Like?). The option is only available on Places that have previously received Google reviews. 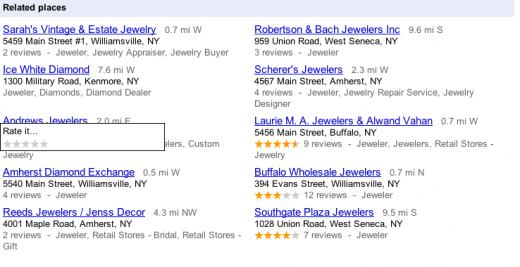 A rating doesn’t require the commitment that a review does and removes some of the barriers to Google gathering more of this sort of information from a broader range of searchers about a broader range of business. It is not clear that ratings will play a role in rankings but they already are playing a role in recommendations. And that is the likely future of search.

Update: As an addendum to this post, it is of interest that Ratings from Hotpot that do not include any review content are now also showing up in the “Reviews by Google” users section:

Update: The Lat Long Article How ratings and reviews work on Google Places points to a Google Hotpot Help file that notes you can rate a business in the following places:

To rate a business on desktop, simply hover over rating stars anywhere you see them. Here are places you’ll see the rating stars, on your computer.

With your mobile device, you can rate places while on the go. You’ll see the rating stars several places on your phone.

Ratings without comments, especially those posted anonymously, were a huge source of complaints by SMBs when Yahoo Local used to allow users to give ‘drive-by’ reviews like this.

There’s no way to address or correct a real problem in the business since the user’s experience contains zero clues about when/how they interacted with the company.

It was definitely used by competitors to downgrade good companies – I saw it first hand when Yahoo temporarily revealed the users behind the marks. Kind of shocking to see how low some companies would stoop to game Y Local.

Call me a skeptic, but this rating method appears to add more heat and far less light.

I have to agree with Cathy’s skepticism.

I have, of late, become more and more convinced that review sites need to take a higher ethical stand — which drive-by ratings don’t support.

Particularly in regulated fields (e.g. Legal, Medical, etc.) the “Merchant” has no recourse whatsoever in specious and/or exaggerated reviews. Anyone can claim to have been a wronged client / patient and the provider due to confidentiality concerns can’t even acknowledge the relationship without a specific release.

I see the presence of false negatives as far more damaging to the ecosystem than the spammy positives. They create a vicious cycle enabling fly-by-night SEO firms to charge for meaningless monitoring and management services and they create an incentive for merchants to fluff their positives far more than if they had a real mechanism to contest the negatives.

And yes, I’ll be working on a manifesto 🙂

Google is clearly attempting to drive more consumer reviewers into the process to gather more data and to potentially create more social context. How this will play out in a ranking sense is unclear.

If it is just used in as a social recommendation its affect might be small but an annoying blot on a places page.

The lack of accountability is surely a problem and I guess we can only wait and see if it is widely abused.

It sure would be nice if there were an appeal process of some sort and more accountability.

The Small Business Bill of Rights eh? It should include sanctity of basic listing data as well as the right to arbitrate reviews… where do I sign?

@Cathy
It appears that some reviewers are still being filtered…whether that is a trust issue or a bug I am not yet sure. If there is more filtering it might (might!) cut back on this sort of abuse.

I would be thoroughly surprised if HotPot ratings have any greater effect on rankings than reviews left on Google prior to HP’s unveiling. This is not (in my estimation) the main significance of “ratings.”

I do however find it VERY significant that when one is logged into one’s own hotpot dashboard the results of whatever local search is performed are filtered by the recommendations of those socially connected to them. This is the bandwagon effect to the max! Google is now combining their own impressive “authority” with the peer pressure wielded by your friends to create the most powerful “map” known to man. This is a LEAP forward for Google! Although this may not be a “facebook killer” (nothing will as long as its CEO is obsessed with having the world’s best functionality and interface,) it has the potential to be a “facebook PLACES killer.”

All of this depends on how much traction it gets, and how it plans to get that traction.

I think ratings are reviews are very different things and Google understands this well. Mike, are ratings displayed in the “reviews” section of Place Pages? If they are excluded from places but included in Hotpot, this is a great way to get more users to contribute and your social network is the de facto spam control.

@Jimmy
Google is definitely moving towards personalized recommendations and that is significant for sure. In my opinion the data collected with Hotspot will be useful to them in that regard, regardless of how well Hotpot does on the traction front.

@Ted
They understand the difference between ratings and reviews but that being said, Ratings (minus the review) are showing up on a Places Pages under the review section. Here is a Hotpot rating I created showing on the Places Page.

@Mike
I feel a Village People song comin’ on… 😉

Thanks for sharing the example. I note the link to your MikeB profile shows no other ratings or reviews under that user name unless I’m logged into my G account. The Maps and Edits records do display whether logged in or not.

If this remains the case, visitors browsing without being logged in may believe the Place Page mark was your first and only rating/review. Not exactly a helpful signal to other page visitors.

@Cathy
It is lame though to include the stars only rating in the same layout space as a review no? Implication is that it has the same level of merit as a full on review…. let the drive bys begin!

One thing I realized is, if they include ratings as a stand alone item in the review column AND add the Places nickname then ratings will have as much accountability as reviews. The problem at this point is that they are still anonymous…

There is another rationale behind Google’s motivations here. Hotpot will drive an increase in Gmail acct activations, thereby it becomes one more weapon in their effort to offset Facebook’s email initiative.

Do you have any idea why some reviews/ratings — even those made using hotspot and google places — don’t translate into seeing a star ranking next to business’s name in a local search?

Do You mean that the stars are not showing on int main search results or that the reviews are showing at all?

The main search results. For example, google “Sayville NY foreclosure lawyer.” My firm is Herrick & kokalj LLP and it has had two reviews recently, both 5 stars. But as you can see, unlike the firm Peter T. Roach & Associates, Google’s local results doesn’t produce the average 5 stars rating next to my firm’s name. You have to click “Place Page” to actually see the stars.

There is a minimum number of reviews required for the listing in the main search results to show the stars. It is usually 5 or 6 reviews but it is industry specific and might be a few more or less depending on how Google has it configured.

If you look at this search for Criminal Defense Attorney Orlando you will see this.

Ahh, so that’s the secret… I was searching high and low for the answer to that one. Thanks so much!

My Review Corpus is Bigger Than Your Review Corpus And Why It Matters | Understanding Google Maps & Local Search
April 11, 2011 at 7:46 am

[…] many ways, ratings are the new reviews and while not as substantial, the fact that so many more people are likely to create them, […]

Google Places: Integrating some of the great information that’s been buried | Understanding Google Maps & Local Search
July 25, 2011 at 9:19 am

[…] obvious conclusion from their comments is that they are going to aggressively pursue the idea of ratings as opposed to long form reviews. Since Hotpot, this is a differentiation strategy that Google has […]