As part of a much larger campaign, Google is now serving up ads that promote Google Maps with a maplet that provides a guided video tour of  Maps functionality. The following ad was returned on the local search “Bradford Pa Restaurants”: 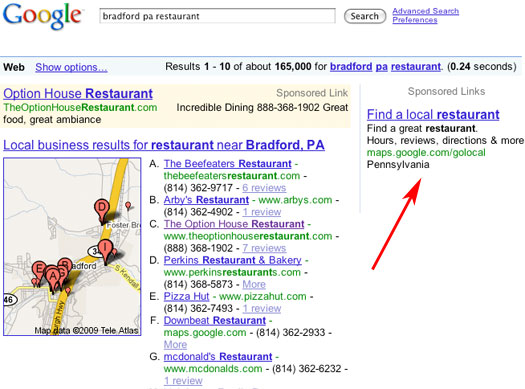 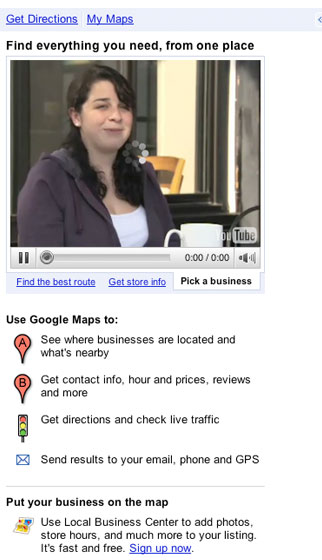 When clicked the ad loads a Maplet (visible at this url) that provides a series of three folksy, first person “I love Google Maps” promotional videos that overview finding routes, getting store information and picking a business (not a locksmith btw).

The videos are a low key, easy to watch, “people on the street” sort that provide a personal touch to the Map experience without beating someone over the head. They are professional and portray Maps as “the way” in a way that is appealing.

Google is obviously spending money of late promoting Maps and attempting to create much of the same “cool” factor that has surrounded Google since its inception. Today, in San Francisco, they invited a number of local businesses to an event called “Favorite Places” where SF Mayor Newsom and other “trendsetters” show off their favorite businesses.

The event has an educational focus that features product demos and speakers to educate smb’s about Maps and Adwords.

Simultaneously, Google is placing statue like Google Map Markers in obvious real world locations while simultaneously rolling out a new maplet called “Favorite Places” that introduces a collection of favorite local places around the globe from worldly “trendsetters.

On one level it is positive and necessary for Google to promote and educate about their Maps products. It is clearly part of a full fledged campaign to position Maps as trendy, fun and something lovable.


The problem Google is confronting though, is that Maps is still a somewhat unwieldy, buggy enterprise that many SMB’s find frustrating and which offers absolutely no real support. Google has attempted to answer some of that criticism with their recent blog post at the Helps Forum.

Most SMB’s and marketing folks recognize that post for what it is, a somewhat hollow attempt at explaining away both the problems and the lack of a true support structure for Maps. Yet Google is now out on the blogs touting that post as answer to the many problems that still are affecting small businesses that use Maps.

My advice to Google: PR is great but a great product with great support is even better. Most SMB’s have a very finely tuned ear and can spot BS at far more than 20 paces and have very long memories. Before you start touting your service, you need to provide some. It is fine to educate and promote your products in an easy listening style but don’t try to tell folks that “we hear you” as a solution to real, concrete bug fixes and human support.

[…] In reaction to a new PR campaign around Maps, Mike B says: It is fine to educate and promote your products in an easy listening style but don’t try to tell […]

Great coverage of this new feature, Mike. I’m getting these to appear for N.Cal searches today.

Google’s videos show a pride in their Maps product from which we can, perhaps, take some small hope. They went to the trouble to make these very professional-style videos. Perhaps they can also go to the trouble to staff maps in a like, professional manner. As you and I know, if these videos were user generated content rather than Google-produced, we would not be hearing such a happy tune about Maps.

It would be great to see a creative response to this, a la the United Airway scenario: http://www.seomoz.org/blog/dear-united-heres-your-chance-for-awesome-reputation-management

Are you good at writing songs, Mike?

My song writing skills are on rough parity with Google’s customer service or non existant.

Are you seeing these appear for highly competitive keywords, or only those with just a few ads showing? It’d be unfortunate if Google was bumping down bidding customers to show their own ads – especially on high-dollar keywords.

I have not looked that hard to see how common they are. Certainly on the phrase I used there is very little inventory.

Amidst all the press yesterday at Mayor Gavin Newsom & Google’s joint press conference at City Hall, it was awkward to say the least when Citysearch and Yelp’s CEO did their presentations as part of the big press showing by Google. Maybe “awkward” is too soft of a word. Whatever that feeling would be if you saw your grandfather naked; that would describe it best.

Some of the presenters, including a digerati chocolate company, showed how their results came up on G with images from bing.com .

Nice job G… if there was a way to blow it, I think you did it.

Yet again G has the same problem that this blog broke the story on here:
https://blumenthals.com/blog/?s=podesta

I have, on occasion, noticed a certain tin ear on the part of Google at times in this local biz, thats for sure.

Excellent article and hits the nail on the head about lack of support.

Thanks. Having studied the types of problems and issues that most folks who come to the forums confront, Google could very well satisfy a great many of them with “automated” support mechanisms. But there comes a point in a system as complex as Maps where some problems just can’t be handled without Google’s direct intervention if only in some cases to say: Its a bug, give us 6 weeks or whatever.

Their expectation that regular folks will “message” this type of news on their behalf is unrealistic.

Google map sometimes contain mistake. I ever use Google map to find an address but when I arrive at the destination, the actual address is still 100m away from there. Google mostly strong in technology but weak in customer support. It is not only for Google map, I think in every Google business, it is hard to find the answer from Google.

[…] July, Google kicked off their Favorite Places Campaign with an event in San Francisco that featured product demos and speakers to educate smb’s about […]

[…] which started their Favorite Places campaign in July by placing large statues in front of high profile businesses, is expanding the campaign by […]

[…] initial rollout of the Places campaign in large metro areas in July -The Favorite Places posters in December to 190,000 businesses in […]

Does the Separation of Google Maps and Google Local Portend a Divorce from infoUSA? | Understanding Google Maps & Local Search
May 27, 2010 at 9:15 am

[…] In reaction to a new PR campaign around Maps, Mike B says: It is fine to educate and promote your products in an easy listening style but don’t try to tell […]

[…] has invested significant marketing resources into the Red pin with a bevy of marketing campaigns. As a result, the pin has […]