My wife’s business, whose business data was not widely distributed across the internet or offline but is in the Local Business Center, has received the following offer in a direct mail piece from Google:

The offer, which drops to $75 after September 30 and expires on November 30th, offers this 6 Step program for her to start an ad campaign: 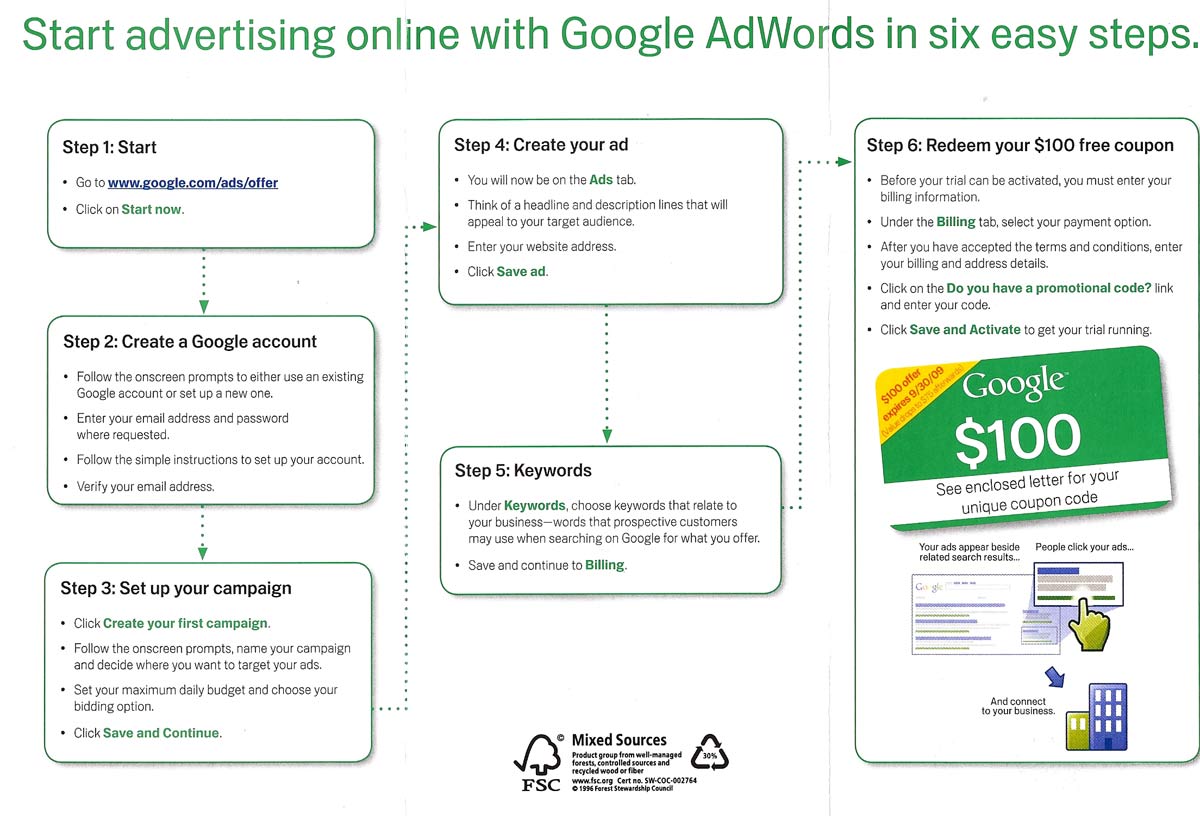 In July, Google kicked off their Favorite Places Campaign with an event in San Francisco that featured product demos and speakers to educate smb’s about Maps and Adwords. They also introduced videos and ads that targeted SMBs in an effort to transition them from Maps to Adwords and become paying customers.

The strategy is sound, only impeded by the still immature nature of the Local Business Center. As a first introduction to Google it might scare off more SMB’s than it attracts.

Mike, I agree that there are bugs to be worked out in the LBC, of course….but c’mon, this is a great initiative by Google!

Maybe they can put some of the Adwords proceeds from these business owners into more support for the LBC…who knows what the internal politics are like at Mountain View. Perhaps the Execs don’t see the LBC as the incredible profit center it COULD be and want some proof first. Frankly I’m surprised it’s taken this long for them to bundle this…

Two suggestions:
1) The packaging still looks a bit clunky…why not spend a little more $$ to make it not look so much like junk mail.

2) Also, of course what would REALLY be great is for G to go through their index of UNCLAIMED listings and get more business owners involved. 🙂

You interpret my enthusiastic response: The strategy is sound, only impeded by the still immature nature of the Local Business Center. As a first introduction to Google it might scare off more SMB’s than it attracts. as being too critical?

I think this is a great idea. It is an appealing campaign to attract SMBs.

But for me the Maps Local Business Center and Adwords are attached at the hip. If you had just struggled with the LBC interface or had received some unanticipated penalty are you going to be predisposed to make the leap to AdWords?

If you go to the restaurant and the Maitre’d is rude and makes you wait an inordinate time to get to your seat, you may decide to go someplace else before you even get to try the chef’s incredible cooking.

I think that the LBC experience needs the same loving care given to the Adwords interface if you expect SMB’s to move up.

Revenues are rough in this business environment.

The list is an incredible resource that makes all kind of sense to leverage. It is in many ways one of the best self selected lists of the avant gard of SMBs, folks that are actively promoting their business & willing to struggle with the LBC. These seem like the perfect prospects for AdWords.

My point above was not to criticize the current effort but to note that Google’s long term efforts to promote Adwords will flounder with SMBs if the LBC and the process for listing in Maps isn’t improved.

It’s always a problem to use the phrase “Follow the simple instructions” in anything related to technology.

This was always G’s plan for LBC, but unfortunately the campaign is not matched by a) business users knowedge of how to use computers and b) the actual system that is designed to welcome SMBs.

It’s a shame to see such a revered and wonderful brand such as Google had, waver and wane in the past 12-18 months. I don’t doubt that it’s hard being number 1, but it’s really going bad for them.

They are sending these out to Canadian bushiness now too. Same offer, $100 then $75, but in Canadian dollars. However they are only getting one week to use the $100 before end of September, at least for the business that just received it in the mail today.

Thanks for the info.

Also I am seeing not just businesses unique to the LBC but businesses that they scraped (erroneously) off a website that we have control over.