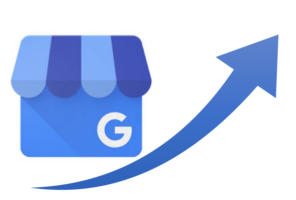 2017 was the year for the Google My Business Center. There was a massive rollout of paid, free and improved products for Google Local this past year (Posts, Websites, Messaging,  Local Service ads, Q & A, Bookings, API 4.0) and a raft of updates to both the usability and functionality of the GMB.

This came after years of neglect, the messy integration into Google Plus, the subesequent even messier pull away from Google Plus and a year or two to clean up the mess. Regardless, this current raft of updates reflect the reality that Google Local is at the core of Google’s mobile strategy going forward.

Local is receiving significant corporate support and is a moat that Google is defending. Critical parts of that moat are the extensive business knowledge graph database with deep and increasingly refined attributes and the direct to SMB and the growing agency (functioning on their behalf) relationships that Google has.

These “parts” offer a source for the data that Google values at the core of Local as well as a low cost DIY sales channel that can take advantage of their ever improving self serve ad products.

For the overall strategy to succeed Google needs direct and on-going SMB engagement. Historically this has been a problem for Google where many SMBs would set and then forget the Local Business Center and the Google My Business Dashboard.

From where I sat, this often was the result of Google thinking, like they did with their search engine: “Build it and they will come”.  It did apparently happen for Facebook with their simpler and more intuitive post boosting. But that never happened for Google in local.

Google though, with rolling out a vast array of products that appeal to a variety of local verticals and markets*,  seems to have finally gotten the message of simple and straight forward value for the SMB.

But Google is not assigning GMB uptake to chance and they are leaving no email stone unturned in their efforts to increase SMB engagement. They finally get that they can not wait for the SMB to arrive giggly at their dashboard, data in hand.  Google seems to understand the need to actively draw them into the GMB and keep them there. Email seems to be at the core of that tactic.

David Mihm and I have mentioned the near spam levels of email that Google has been sending. But my impressions were created from the many emails from the different local listings that I manage.

This Gmail account that I recently set up for one of my GMB accounts though captures the sheer volume of emails that Google has been sending and is a reflection of their forceful efforts at SMB engagement. This email account has no other purpose than receiving communiques from Google. I deleted any Google message that wasn’t related to local in some way. Note that this client is not doing posts which would have delivered a number of additional emails: 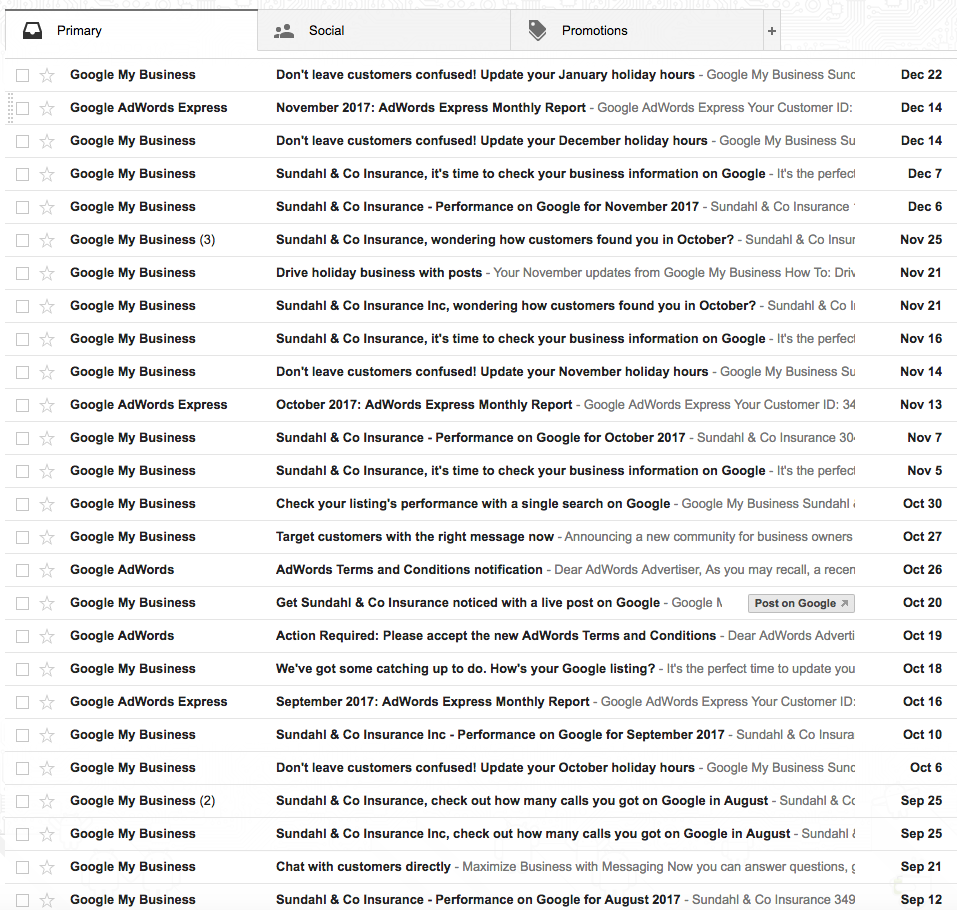 * Websites is designed for developing markets, Messaging targets the local service professional as does Local Service ads,  Posts is for locations that are into brand building and story telling, Bookings is initially targeted for the spa and salon industry and the API is targeted to agencies that currently deal with a lot of small local businesses. Q & A, well, that is targeted towards consumers. Any business that finds pleasure in it, is obviously a masochist.

Thanks for the wrap up! We’ve noticed that more mobile based leads are browsing our GMB info (esp photos) and contacting us directly from the GMB listing, bypassing the click to our website. This has us refreshing our content there as frequently (now) as we do other social media sites. I consider the GMB listing as our #2 digital asset, with the website #1.

OK. Thanks again! Heading over to those articles now.

I’ve seen similar results in my own data where GMB outpaces the website for phone call conversions and directions requests. A Bright Local study also suggested that more shoppers are simply pulling necessary details like reviews from the SERP’s and then visiting the business directly without ever viewing the website.

Thanks for sharing this article Mark. When it comes to strategy, wouldn’t maybe be dangerous to not own our digital assets (after all, it’s a Google page)?

Not owning your digital assets IS dangerous. But if Google increasingly owns the web, not giving your assets to Google means you don’t get to play. But owning them is not hoarding them.

For me you need to give what you can of your web assets to Google knowing that it will lead to increased conversions.

If you are going to hoard a digital asset, make it the proxy for the client relationship (customer email address, mobile phone, your mailing list, your newsletter list). Own that, nurture that and never give that away to Google.

Good summary, Mike! Thank you for covering all of the new features in 2017. This post emphasizes how well you’ve done that.

Thanks Mike, appreciate the continued insights on GMB and how to use it.