Google Local has been on a tear lately with tests being reported on a regular, almost daily basis. Two that really caught my eye were local restaurant results found by Sergey Alakov and the other by Kevin Indig (h/t Megan Hannay).

These many tests are a testament to Google’s continual effort to gain audience and more importantly, keep that audience at Google long enough to complete a transaction. From Google’s POV,  the transaction will hopefully be monetized but if not then one that further leverages Google resources to gather data and user time like a click to call or driving directions.

Google has been actively collecting and collating attributes about all sorts of businesses but particularly restaurants. These have largely been buried in the depths of the Knowledge Panel and few clicks away from the front page.

These new visual attribute representations are front and center and colorful. According to Sergey he has seen as many as eight showing at once in the Knowledge Panel.

More transactional but equally interesting is Google showing a “reservation answerbox” on the desktip that allows for a table booking directly with OpenTable. 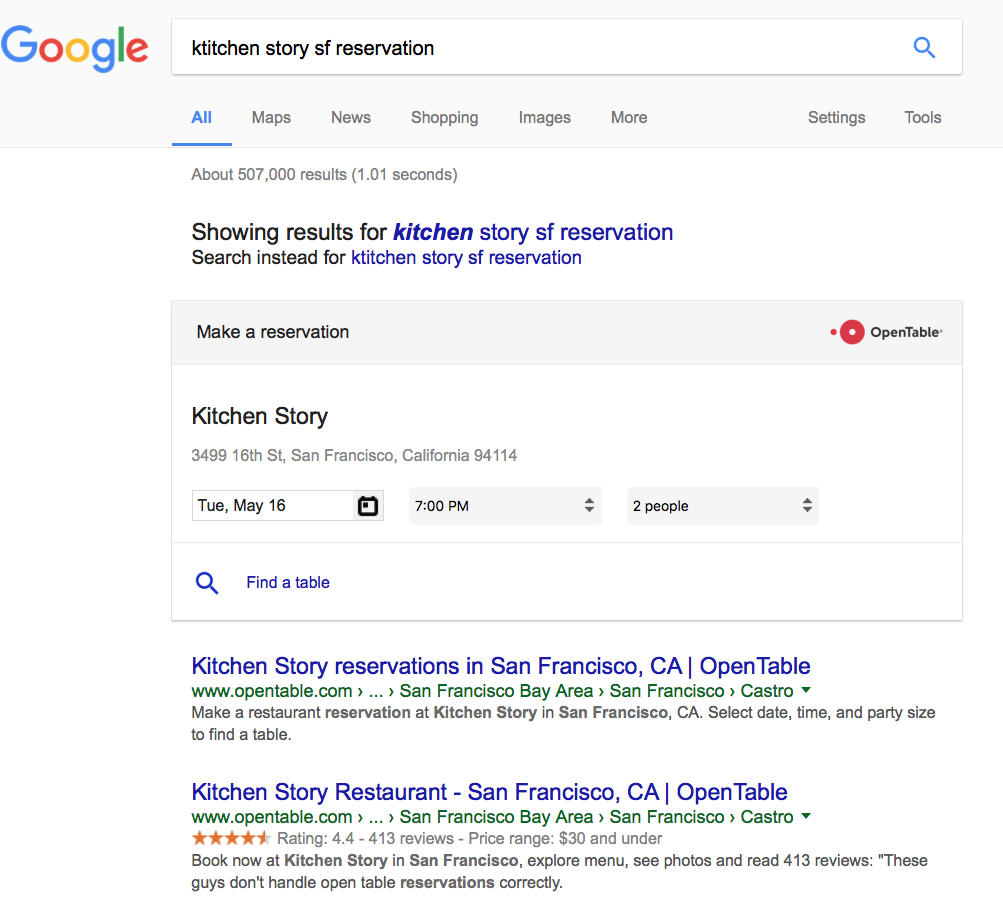 That is interesting, Mike. Last I checked OpenTable (OT) charged a $1.00 per reservation (per head) and a little more for a “special reservation”. (those prices could have changed).
I don’t see the revenues for Google but I think there are other aspects of increased visibility in the restaurant world, and specifically among independent restaurant owners that google could be shooting for.

My observation among restaurant owners is that they generally are completely disconnected from google and have little awareness of its impact. That relates to individually owned restaurants and not the chains. The chains are very aware of Google and advertise extensively.

Of 7 I can think of off the top of my head, only one was google aware….but possibly not as currently focused on it and almost assuredly less focused on it than in the past. He did know that back in the day when keywords were available he got a lot of traffic for phrases having to do with Italian restaurant/city and its many variations. Of the other 6 they were virtually oblivious to google and search engines. If anything at least 2 thought Yelp delivered more traffic. None ever looked at a piece of web analytics from any source. Four were extremely aware of reviews, including reviews on yelp, less so on google and also acutely aware of local review and media sources.

Of the restaurant owners I know, they are not very analytical in a business sense, but sharp when it comes to their kitchen, front of the house and the costs they incur.

On the website side of things at least in the Washington DC region there are ever more restaurant websites developed by a few known designers that specialize in minimalist cool designs.
Very little content. There is a hit or miss element to whether the independents actually claim their listing on google. If anything they might claim a listing on yelp before claiming one on google.

Finally through last autumn I had noticed an amazing scarcity of ads in google for and from independents. (the DC area and several other metro regions. ) I’m noticing more now.

To me that is the big opportunity for google. Local restaurants are ever more searched for on mobile and the mobile screen, upon opening is JUST ADS. No pac, no organic. For our non restaurant smb’s we are seeing mobile ad traffic that is approximating organic/pac traffic–almost 50% clicks on ads and 50% clicks on organic/pac. On desktop we see about 20% ads and 80% organic/pac traffic. Huge difference. Many mobile users are “hijacked by ads”.

If restaurateurs start paying more attention to google they just might start claiming their listings, receiving and paying attention to emails from GMB and maybe start using adwords express if not adwords.

That would pan out for google.

@Dave
Yes it is interesting. In the restaurants that I carefully analyze, even with a fair bit of Yelp and TA activity, Google Local is killing it and far outpacing either of them.

I guess they just want to let OpenTable, Yelp or TA appear to do the lifting. Or like you said, don’t look at their analytics to know.

I am actually shocked how disconnected business owners are from their customers and how little they understand their customers’ decision-making process.

I went out for dinner last night. Was about to enter a place, but decided to check their reviews first. 2.6 (the profile wasn’t claimed, so they clearly don’t pay attention to what’s happening with their listing). Switched to a similar place next door. 3.8. Went there.

3.8 is not perfect, and it’s fairly easy to achieve if you provide decent enough service and ask for reviews from time to time. If you are a small restaurant/bar you don’t compete with everyone in the market, you compete with similar places in the same area. And yet, most businesses don’t care / don’t understand the importance of it.

I’m not able to see this update yet but this is very exciting . I was actually working on getting our restaurants’ attributes updated. Some attributes are showing up on mobile such as ‘tourists’ but not in the GMB admin, I wished we had a full list.

@Sergey, @Mike: The 7 restaurants to which I refer are too small to be considered a “sample”. Its an anecdotal group. Nevertheless I find it astounding with regard to restaurateurs, including this group of 7 and others I have known over the years. They are significantly oblivious to Google.

@Mike: As it applies to google “killing Yelp” as seen in various analytical reports. So true. If you take a lot of Yelp sales people’s reports and question them, they’ll throw out all sorts of stats about visits and views etc etc. I often ask about that. I’ll write down what they state (as unconfirmable as any other statistic from so many sources, including google. Nevertheless whatever they tell me it always pales in comparison to impression volume that I see in google adwords impressions (and who knows if that is accurate????).

My impression is that even if the Yelp sales people are lying/exaggerating/or speaking in Trump language…and it is way overstated….its way less than google.

Restaurateurs are amazingly divorced from google traffic. Lots of small SMB operators are divorced and not knowledgeable about web traffic, but I find it astounding the overwhelming disconnect between independent restaurants and google.

Chains are aware of it. Here is a fascinating article from a marketing exect at Wendys. http://www.geomarketing.com/wendys-finds-location-based-search-is-critical

Independents seem oblivious to it. Of interest as to the Open Table (OT) reservations….I believe about 20% of all restaurants in the US take reservations. Obviously Wendy’s above doesn’t!!!

My guess is that with google’s big numbers…a slice of the OT income wouldn’t mean much to them. But its the growth in awareness that might mean a lot and could get independents to advertise in adwords/adwords Express. Compared to so many verticals it appears to be a teeny drop in the bucket.

Just as google can show restaurants how busy they are and now are starting to show them how many repeat searches they get…if google had stats on how many OT reservations came through Google search that would make a BIG IMPACT!!!!!

I suspect if they see many of the OT reservations are coming through google A HUGE LIGHT WILL GO OFF IN THEIR HEADS. Then maybe independent restaurateurs will start spending money on Google Adwords and Adwords Express.

I agree, it’s exciting to find such an open market to possibly help these restaurants. It’s discouraging, when I try to explain to them about GMB, Maps and Reviews, they look at me like I’m dumb. So I eat there, post a photo and review on maps, within 3-4 weeks it’s had 50,000 views. Those views have probably come from Mobile search within the suburb. Lots of competition in that suburb. I’m a Level 3 Google Local Guide. Maybe I need a Google hat with a Badge on it….. and get a free meal. LOL

@Dave
Gaining mindshare is something, due to culture and technology, Google has has never been good at.

@Paul
While Google may be big and offer many things seemingly for “free”, never for a moment think of them as an open market. Given even a smidgeon of opportunity they would make themselves the ONLY market. As it is they are monetizing every nook and cranny of local as we speak.

@Dave
You brought a very important point. OT charges $1/cover when the reservation comes from their website and $0.25 when the reservation comes from our website (we’re using OT API on our website). Ads are getting pushed at the bottom of the page when there’s the answer box. We’re stuck with this new Google/OT partnership and OT will definitely make more money and Google will get his percentage.

@Thibault On that desktop search phrase it had to say restaurant name reservations for the OT application to show up. I don’t know. Would those be high volume searches as opposed to the name of the restaurant and/or the type of restaurant neighborhood or town? In any case it is a way for google to insert OT at the top of search results.

That desktop view might be a test and/or I’m getting personalized results for restaurant name reservation searches. Its showing and not showing.
Interestingly, or not, the mobile apple maps app shows the OT reservation app immediately when you search by name only. I wonder if A Maps takes any money from that?

@Thibault: As an operator, you know all this better than I. I know operators who feel the pain from OT based on the whole monthly package of costs plus the $1/head costs. Others I know are very happy with OT. They turn over all reservations to OT.

Interestingly I’m looking at the adjustable website for one restaurant: Both Mobile and Desktop. They take calls. On the Reservation presentation they have highlighted booking a reservation via Yelp as the primary visible item and they also offer booking on OT, but it is less visible. They also use several delivery services. I know the operators. I’ll chat with them.

I’m in the Washington DC region. Rents are skyrocketing and they are getting deep expensive in the outer suburbs. Lots and lots of competition. Margins are TOUGH. If I were in your shoes I’d do everything I could to cut those reservation fees. Google may make that tougher.