I have recently noted examples (here & here) of merged business records in Google Maps. It appears that this phenomena and the rogue hospital phone number issues of Duke University and other medical centers are related.

Roughly two weeks ago I edited a record in Google Maps for a new web design customer and as has been my recent experience with the LBC, was posted to Maps immediately and correctly with no verification required. My client, also my best college friend, was impressed. However, he called me early this week and noted problems with his Google Maps record: 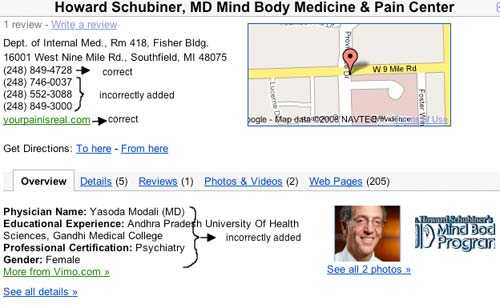 He had suddenly acquired additional phone numbers and the medical profile of a Doctor in Carbondale, IL with whom he has no relation. The phone numbers were from regional Detroit sites that had his hospital name, St. John Providence Hospital, but no reference to him.

The signals that I had assumed might be causing the problems: website address, web links, web references on his site seem to have had no impact. Like the Duke Center problem, there are multiple offices, phone numbers and doctors at this street address which might explain the confusion on the phone numbers. But there is no descernable relationship on the doctor with whom he was confused.

Google has his complete business record in the LBC so why should they be adding data from other sources anyways? It is one of those situations where one’s confidence in their ability to handle personal medical records might be called into question.

Mike –
The answer is no – Google is not qualified to be dealing with people’s private medical records. There will be a failure somewhere along the line that will reveal X number of people’s private records to the public. This is a case where I think Google has overstepped the bounds of common sense in every way. They’ve got no business doing this, and I have yet to hear anyone say, “gee, what a great idea. Sure I’ll give my medical records to Google.”

People are not pleased about this happening, but Google is doing it anyway. Not cool.

Your examples gives a clear and compelling prediction as to how this is going to impact Americans’ already over-the-limit frustration with health care in the country.

If we see the SMBs on the verge of a breakdown over their business records, how will it be when it comes to their health records?

I can only imagine my record being “merged” with someone else and getting the good kidney taken out. 🙂

Is it possible that Google is starting to get information overload? I for one am hoping to see someone take the big guy on the block down a peg or 2. Until then we will get what we get.

You can’t blame the big guys for being big…that is the nature of the market and the demand of the market…that being said Google is taking on the role of a utility in our society and you should hold them to very high standards of:
â€¢1- Accuracy
â€¢2- Transparency

They sure seem to be remiss on both counts.

MD goes for Moldova, Republic of 🙂

Having worked in the information tecnology groups in hospital and pharmaceutical settings, I don’t think Google is really ready for the rigors of dealing with medical and drug information. Honestly,
I haven’t read a lot about Google’s path to creating a personal medical record system but if it involves integrating data from multiple sources such as medical claims, retail pharmacies, and laboratories I believe many law suits will be forthcoming. One of the holy grails of healthcare is the creation of a unique personal identifier…sorry no social security numbers allowed as this violates privacy of medical information.

Never mind the question above. I saw what you posted in a screenshot within the Google Maps.

That is so wierd and so revealing of some of the problems that pop up in Google maps.

Some strange element in Google maps is automatically adding data from another source into that which you entered in the LBC. On top of the information about the other doctor is the website connected with the other doctor which includes a search function for other doctors. How did that website get added into the mix by Google?

How frustrating. Even beginning to search for where the error and other information might be originating would be trying. I hope you report this in Google groups. How long will it take to correct the problem?

Where is the customer service function that can correct these issues?

Dave –
The customer service is at Yahoo. haha.
Miriam

Yahoo local has lots of problems and bad information also, Miriam. It just doesn’t get the traffic and visability that google gets.

I am with you…the holy grail appears to be out of reach of Google. But that doesn’t appear to be stopping them from trying. Perhaps they will use your gmail account as your unique medical identifier. 🙂

Hopefully they will prioritize “the end user experience” from a different perspective when they enter the medical records market.

Your suggestion is good…in fact I have heard that Yahoo is up for sale. 🙂

[…] today EarlPearl asked the question: Where is the information turning up […]

[…] and others have reported on this issue in the past (here, here, here & here). It certainly results in confused customers and annoyed business owners. […]

[…] this issue has been publicized and known and blogged about at least for a few months, thanks to the tireless efforts of Mike Blumenthal on his local seo blog. I personally made a thread at the Google Group on […]