In late February I reported on a Maps Record failure with a medical listing where the record had been conflated with another physician and it turns out with a hospital as well (image of physician mixup / image of hospital-dr. mix up). I reported the problem to the Google Groups for Business forum.

The problem had not been resolved as of March 20 so I posted again. I have not received any communication from Google but definite if uneven progress is to be reported. 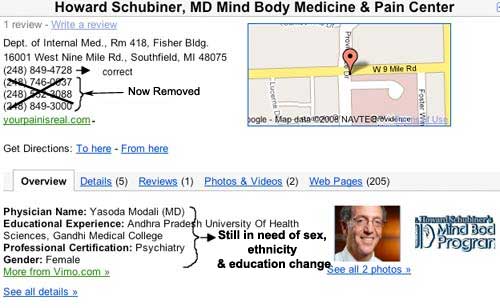 So while there has been a lack of any feedback to my posting there has been some progress to report. I have no idea if the progress would have occurred without my posting at the group or whether Map’s Guide Jen was busily at work behind the scenes to avoid another poison pen letter from me. Regardless, it is getting better. He doesn’t mind the ambiguity but if I could just get his sex changed before his mother sees it, life would be good. 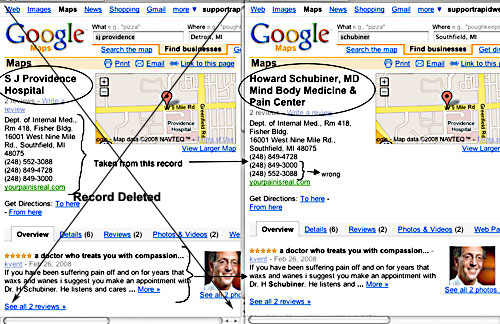 […] was among the first to cover the latest Google Maps snafu and reminded everyone that Google has a history of inappropriately merging business listings, usually when two businesses are located in the same building or share a phone line. Not exactly […]