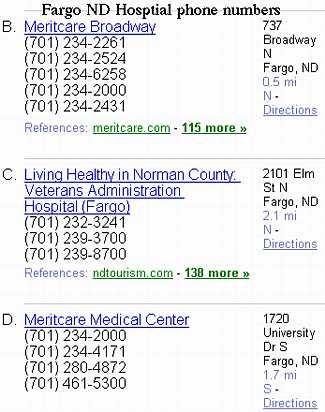 When an additional report surfaced in Google Maps for Business Owners from NYU Medical Center, I decided to investigate the depth of the issue and see if was isolated to large teaching centers or was more widespread throughout the medical listings.

The report from NYU reported not just multiple and wrong phone numbers but wrong map locations as well. Google’s new feature in the Local Business Center, allowing the movement of Map markers, will facilitate some corrections about location but not the problems with phone numbers. Most medical centers have difficulty complying with Google’s protocol for record correction as they have multiple mail stops making delivery of the PIN card unlikely and multiple phone lines making a call for verification almost impossible.

My assessment?
The medical center phone data is in critical condition and in need of intensive care. .

Only 2 of the 13 markets did not have listings showing 4 or 5 phone numbers. 18% of all listings showed 3 or more phone numbers despite low verification rates through the Local Business Center. And if you live in Fargo, ND it appears by Google’s account that there are more medical phone numbers than there are doctors.

When I found 5 phone numbers listed for a hospital, I spot checked by calling some of the numbers to see where they went and if the answerer had received erroneous calls. In very limited tests, the numbers went to a department rather than the main desk facility listed and noted receiving a fairly large number of wrong number calls. I think it is safe to assume that any facility with 4 or 5 (and likely 3) numbers listed probably has numbers not for the main facility or that are in error.

The fact that none of the medical facilities with 3, 4 or 5 phone numbers listed had yet to claim the record in the Local Business Center shows: 1)that there is a possibility that they will get cleaned up and 2)that it is a ways off. Another (perhaps more real world) test of the quality of this data would be to see if the single number that Google picks for these records in the Local OneBox is the correct one.

I identified 6 mid sized cities that might have advanced medical services and searched on the phrase “Medical Center + City, St” and 7 smaller cities for the phrase “hospital + City, St”. To facilitate the testing I used the Google URL that delivers maps in plain HTML – http://maps.google.com/?output=html. This allowed a quick assessment of the extraneous phone number issue as all numbers were shown directly below the specific listing rather than in the pop up box.

Here are the searches:

In most, but not all, of the listings the details in the record were provided by the Superpages or ahd.com. There were some records with additional detail providers (BBB, Talking Phone Pages) as well a some records with multiple phone numbers that had no recognized source for details. So it isn’t a single source clearly causing the problem but rather implies that Google’s algorithm for matching phone numbers and records doesn’t work very well in this situation.

The issue of accuracy in Local Search affects all providers of search including (but not limited to) Google, Yahoo, Ask, Superpages, AOl etc., etc.. Google though, by virtue of their market dominance in search and the inclusion of the local results on the Local Onebox gets more scrutiny than the others. Ultimately, for the public to broadly embrace AND rely on local search, the issue of accuracy needs to be solved.

Mike Blumenthal has a detailed look at some of the inaccuracies Google Maps and other local search engines have when it comes to phone listings of medical centers. Mike has been following these inaccuracies for a while and has come up with a grid showi…

[…] Local Data Accuracy: An Ongoing Challenge (Spotted via Barry at SEL) Mike Blumenthal, who writes a local search blog, has been devoting serious time to understanding the nuts and bolts and what’s under the hood at Google and Yahoo! local. He posts about the quality of basic listings data (poor) in the medical category: […]

You are much nicer about this stuff than me. LOL. And your research is great. Did you check the actual websites also? I’d assume their contact information is more accurate.

I’d think there needs to be a way to get contact information directly from existing websites rather than the directories.

It is so easy to change those numbers all the time. That is why websites are so terrific. You can update them immediately and represent new accurate information…rather than something that was recorded a long time ago.

The data pretty much speak for themselves, no?

I didn’t check the website….that is a good idea. If the data doesn’t get cleaned up in a 2 or 3 months perhaps I will revisit.

This particular problem seems to afflict this vertical more so than others and I am not really sure why. Perhaps meidcal centers have more to worry about than their Google listing or perhaps because they are somewhat outside of the profit incentives that motivates others to get their records squared away.

As I pointed out, one really needs to test the OneBox results and see if the are “accurate enough” as I am sure that they have more impact than these results.

I looked at your first example, Pittsburgh, Pa Medical Center. The link takes you to the G maps listing for Mercy Hospital with 2 phone numbers. Then I went to the website. That is for Pittsburgh Mercy Health System. This is a large institution with 11 separate locations in the region for all types of facilities. Scroll through the locations and you’ll find that one of the two phone numbers listed is for Mercy Hospital. The 412-232-8111 number is accurate for one facility.

I scrolled through the other locations and it didn’t match the 2nd number in the G maps directory information. Each of the 11 facilities has a different main number but not the 2nd number listed; 412-232-7950. I went to the main contact number for the website and it was a 3rd phone number; 412-232-5660.

I would think that G maps specifically and other similar sources, like Y and MSN Local need to take a step to clean the data–primarily sourcing the information from the website and not any other source. Directory information can be old and outdated. Website information should be the most updated.

Of all sources of this ilk, though, Google insertion of maps is clearly seeing more traffic than any other source and is driving more calls off the G maps inserts. Its clearly something that needs to be fixed.

How this is corrected is up to Google. It certainly needs some reconstructive surgery.

I noticed how G maps recently added a picture off my website to the G maps data. They chose and pulled the picture, from amongst a number of different pics.

It was interesting and an interesting choice…and one that as a business owner I wouldn’t argue with…but might possibly have suggested a different pic.

Now if they can pull a pic…independantly determine relevancy…and post the pic….then they can review phone numbers on the site.

Seeing how the phone number issue is one that has caused some problems for some sites/institutions/businesses and certainly the people calling those numbers…it might be appropriate to focus on that aspect of the vast G maps data base. Even starting with one type of entry; say medical centers.

That would be a big improvement…and were they to be successful G would be lightyears ahead of other local data sources. (of course any version of a local SE could try the same.)

Yes, the ironies certainly do abound, don’t they?

According to Bill Slawski’s patent review they are attempting to do this, why so unsuccessfully in the medical arena escapes me.

[…] an unsuspecting user, in a life threatening situation, will be searching for an emergency room or hospital and be sent in the wrong direction and to a disastrous outcome. « Google Responds to […]

[…] issues compounded by the lack of customer support. This has been an on-going problem and was first reported as long ago as March, […]