In a quiet upgrade to the Local Business Center, Google has provided business owners with the option of using their entered address as the source for information for the Plus Box found in the main search results.

The problem with errors and frustation with the complexities in fixing them had been noted here and at SearchEngineLand. This upgrade should provide an answer to the many requests for assistance with an erroneouse Plus Box in the Google Maps for Business Group. At last count there were 75 outstanding requests received in the last 45 days. 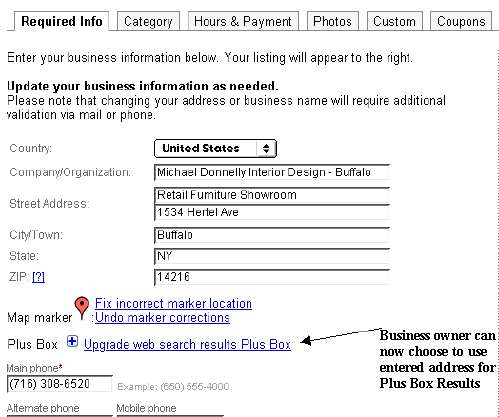 In a phone interview with Carter Maslan, Product Development Manager for Google Maps, he noted that he was aware of the bug for almost 15 months but that it hadnâ€™t significantly impacted user experience. He also noted that the upgrade would free Maps Guide Jen for the task of correcting erroneous phone numbers in the medical listing records and finding missing local business records lost in a late February mishap.

Matt Cutts noted in an email, shortly after the update went live, that he felt better now that Google had implemented a feature that he claimed was in the Local Business Center at the time of introduction of the Plus Box in December 2006.

Keep me posted. Sometimes these new features take a while to propagate. Let me know when it shows u.

That is exactly the “fix” you recommended.

I’d say congrats to you, Mike.

Its simple, its logical.

Unfortunately we won’t get a precise fix on how google’s algo for the plusbox works. 😉

That is a nice improvement. I’ll have to reference the pti.edu group. That one has been an outstanding unresolved problem, first reported in November ’07.

That is a nice improvement. Its also timely subject to 75 acknowledged complaints in the last 45 days. Now how many are there with the problem that never complained.

But seriously, congrats on identifying and publicizing the problem…..and son of a gun…..their correction mechanism is exactly what you suggested.

It is exactly the “fix” I recommended isn’t it.

ok this was an april’s fools joke right

Checked my business listing, but there is no Plus Box available for it, even though our business address is there for over a year. The business listing pops up in the Google Maps as it supposed to, but no plus box in the web results either. I do see the plus box appearing with our address from other sites like local paper and a soc. network where our business is listed. Weird.

Ah, yes,,,it was my wishful thinking rather than any reality….lots of facts above but not the ones that I was hoping for. The article should be titled: Local Business Center upgrade should allow Plus Box control.

An no Jen, as far as I know, has not yet gone in search of the missing business records.

Mike it was a good joke. Search Engine Land has picked up your post. I think they think your post is real.

Yikes. I have been on the road all day and I didn’t realize that SEL had picked it up. Well Google will see it for sure now. Hopefully Jen will get those medical records squared away now (although probably not mine (: )

What’s the penalty for too good of an April Fool’s yarn in the Search World? I guess I should enjoy it while I can, I probably won’t get the chance twice.

What is interesting to me is that Matt Cutts did say in Dec 06 that the Plus Box would in fact get its info from the Local Business Center. It is also the case that that the complaints are rising in the groups and that if you can’t catch Google’s eye to fix the problem then it is very difficult for a webmaster to take care of on their own.

Maybe this announcement will show up some day soon.

some things never run by the clock mike 😉

Just like that update not propagating over the pond in a timely fashion 🙂 but 16 months. The system issues must be huge.

can’t be that huge for their BigTable to handle tho :p

Ah Man – Ya Got Me!!!! I was so stoked… then only left with disappointment 🙁

I’ll admit, I’m one of the “75 outstanding requests received in the last 45 days”… Thanks for the jokes.

Sorry for the letdown. You weren’t the only one. Apparently I snookered the folks at SEL as well.

I’ve been following the groups and there have been an awful lot of plus box problems that would be corrected if Google could only get the LBC to correctly feed the data over.

In December 2006, Matt Cutts did say that it would. Was he misinformed?

Seems unlikely. So the real question at hand is why has the most reliable source for local data, the verified LBC listing, not yet been integrated into the PlusBox in the main serps?

Are there bigger architectural issues? Is it just something that will get fixed eventually?

It doesn’t seem very productive for Google to have to make hand exceptions for a bunch of bee buzzing small business folks thats for sure.

[…] week I wrote an April 1st post about an upgrade to the Local Business Center that apparently a lot of people wanted to be real. I […]

[…] April 1, I wrote a post: Local Business Center upgrade now allows Plus Box control that noted that Google was now allowing business owners to more directly control the use of the […]