Google Plus Box – for real

This week I wrote an April 1st post about an upgrade to the Local Business Center that apparently a lot of people wanted to be real. I wanted it to finally work as well but unfortunately it doesn’t.

Here are my previous posts about the Plus Box issues:
â€¢How to change your Business Address in the Internet Age
â€¢5 Simple Steps to fix the plus box (yea right)
â€¢Google Plus Box – Where does the (wrong) data come from?
â€¢Google and the PlusBox Blues 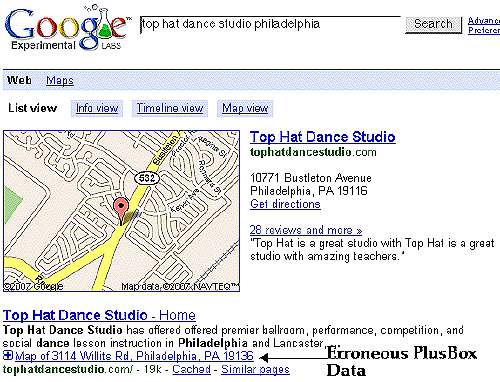 Iâ€™ve been following the Google Maps for Business group and there have been many reported Plus Box problems that would be corrected if Google could only get the LBC to correctly feed the data over to the Plus Box in the main search results page.

In December 2006 upon introduction of the Plus Box, Matt Cutts noted that the LBC would supply the correct info to the Plus Box.

Was he misinformed? Seems unlikely. So the real question at hand is why has the most reliable source for local data, the verified LBC listing, not yet been integrated into the Plus Box in the main search results in a reliable way?

Are there bigger architectural issues? Is it just something that will get fixed eventually?

This problem has existed for 16 months. The motivated business owners and those that notice the errors, contact the Google Maps for Busines Group and may get some help. Maps guide Jen heads off for a week, or two or more and the erroneous Plus Box may disappear. There are business owners that report up to 9 months to get the wrong data removed. It is not replaced with the correct LBC data, it just disappears.

There have been a number of anecdotal reports of it affecting business and of end users going to the wrong end of town or competitors benefitting. It certainly highlights both the difficulties with Maps AND the difficulty of dealing with Google.

It doesnâ€™t seem very productive for Google to have to make hand exceptions every time that their Plus Box algo goes awry. And it makes no sense to make the procedure for correcting it so difficult.

I am in total agreement with you on this issue, Mike. I worked to help one group get this situation corrected. It has been a frustrating challenge for the corporate inhouse webmaster. Periodically he would get calls from operating personnel referencing that another potential customer had driven to an old erroneous address that showed in either the plusbox or earlier within an authoritative onebox.

The group tried to change this for months. Nothing worked. Updates in the local business center didn’t correct the wrong address. At one point in early December a google rep in Google groups for business owners said they would take care of the problem. They didn’t.

The problem persisted for months. Two days ago the plusbox was removed from their listing and the webmaster emailed me saying that the problem was solved.

How ironic. The so-called improvements in search google trumpeted in announcing Universal Search, was removed…and the client found it to be an improvement. At least erroneous information is currently not showing.

Google never took responsibility for the wrong information. They never were willing to stand at the plate.

Their reps in google groups for business owners may…or may not address the issues. They may say they’ll do something and not follow up.

Our research, confirmed by Bill Slawski, suggest that erroneous data was coming from potentially a variety of sources, including crawls and aggregate data from other websites.

If the data is coming from 3rd party sources…..I pity the webmaster who tries to get 3rd party data corrected on other websites. It is painfully difficult in many cases, if not impossible.

In any case, I wish that there was a correction button as you suggested. How delightful that would be to the many webmasters with complaints of this ilk and the frustration of being completely subject to the whims of google, that hasn’t acted in an accountable or responsive manner.

Dave – what chagrin to know that customers are being driven away! That’s so aggravating.

I like the idea of a ‘correct’ button, too.

Hopefully Google will get this squared away. Sooner would be nice.

I did a little follow up on the plusbox situation. As we discussed just a day or 2 ago, the problematic plusbox with erroneous old outdated address information was removed. You should be aware that the inhouse webmaster sent me and one other person an email noting that the plusbox info was no longer visable. He was quite happy.

Then, following conversations we had, I did a search at google groups for business owners on the phrase plusbox.

I went through a couple of the complaints wherein business owners/site owners and webmasters discussed the difficulty of getting this data fixed.

In the three cases I checked; crushpadwine.com/; asheville medicine and pediatrics, and one other, something cuisine; the plusboxes were gone in all cases.

Of interest, on April 3, someone added a comment to a long string of complaints about plusbox info…noting that the plusbox info was wrong. I checked and it was way off.

That new complaint is still sitting there and has yet to be dealt with.

In two of the examples, Google Jen referenced in mid March that she would deal with the issue. Obviously she did and cleaned up the bad information. One of the complaints dated back to January.

It would appear that as of March, Google Jen and others at Google are addressing plusbox complaints in google groups and are hand removing plusboxes.

If one has a new complaint it will await further response from Google.

Its certainly not the suggestion you made of a “fixit” button. It is an improvement nonetheless.

One can only hope that google jen and her colleages will stay consistent in addressing this issue.

It doesn’t address the algo issue or how wrong information is turning up. I suppose that will remain a mystery, though I think Bill’s long review of the issue pointed to potential sources for bad plusbox data.

Also of interest, I went back to Matt Cutts’ blog post of late 2006 referencing the “at that time new” plusbox. There were many comments on the blog during a short period following the post. Matt responded a number of times. Following that, there have been occasional comments over the many months and they don’t receive comments any more. It is a relatively old blog post after all.

It would appear that Google is taking the quiet, under the radar screen approach to dealing with this issue.

In a sense they have instituted a “partial” customer service response. It isn’t labeled customer response….and there is no specific statement that Google will promptly and responsibly deal with these issues. In other words they aren’t facing full responsibility.

They are dealing with it now, though in a partial and quiet manner.

I suppose that is progress.

Thanks for the update on that, Dave!

I am left wondering how it benefits Google to do things under the radar. Transparency and being able to say, “I’ve made a mistake,” creates such tremendous loyalty. Maybe they are afraid chaos would ensue if they publicly announced that there are some serious problems with one of their apps? I just don’t know.

At the very least, it’s good they are attending to this little by little, even if it’s being done without much communication.