Why is Yelp Failing at the iMessage App Game? Because They are Choosing To

As a consumer I like and use Yelp. I don’t like their business practices but as a consumer it’s my goto restaurant resource these days when traveling. I also like messaging, particularly iMessage, as my way of communicating with the 15 or so people I love and work with and often travel to see. So I was  dejected but in the end not surprised that Yelp had chosen to so mangle their iMessage App experience.

I am fascinated by the new capability of iMessage as a platform and an ecosystem. One   that can be upgraded with third party apps and now has its own App Store. Like every American , I was initially attracted to the idea of doing silly stickers and gifs. Surprisingly they ultimately did offer a benefit. They greased the skids to discovery. 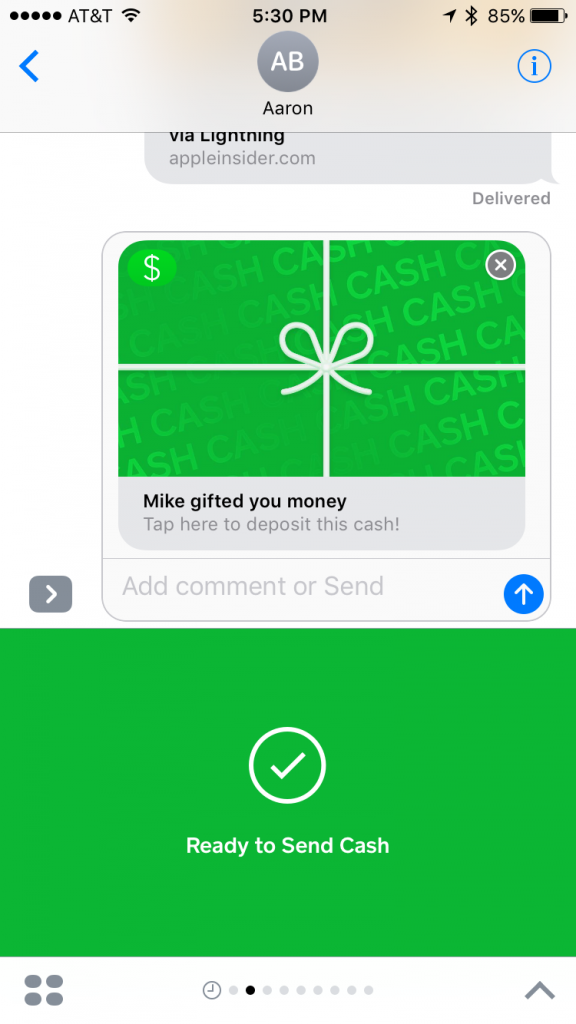 I soon started exploring the local app world and was surprised and delighted how useful, functional and seamless some of these apps were. I could identify, share1 and purchase tickets to a movie with Fandango. To my children’s delight I could quickly and easily gift them $20 each from Square Cash or Venmo without exiting to the app.

OpenTable turned out to be an eye opening experience allowing me to easily search a location for spots to eat, identify several restaurants, share them, even allow myself and friends to vote on them and then book one of them all from within iMessage. And I don’t even have the app on my phone.

Easy peasy.  Until I got to Yelp. 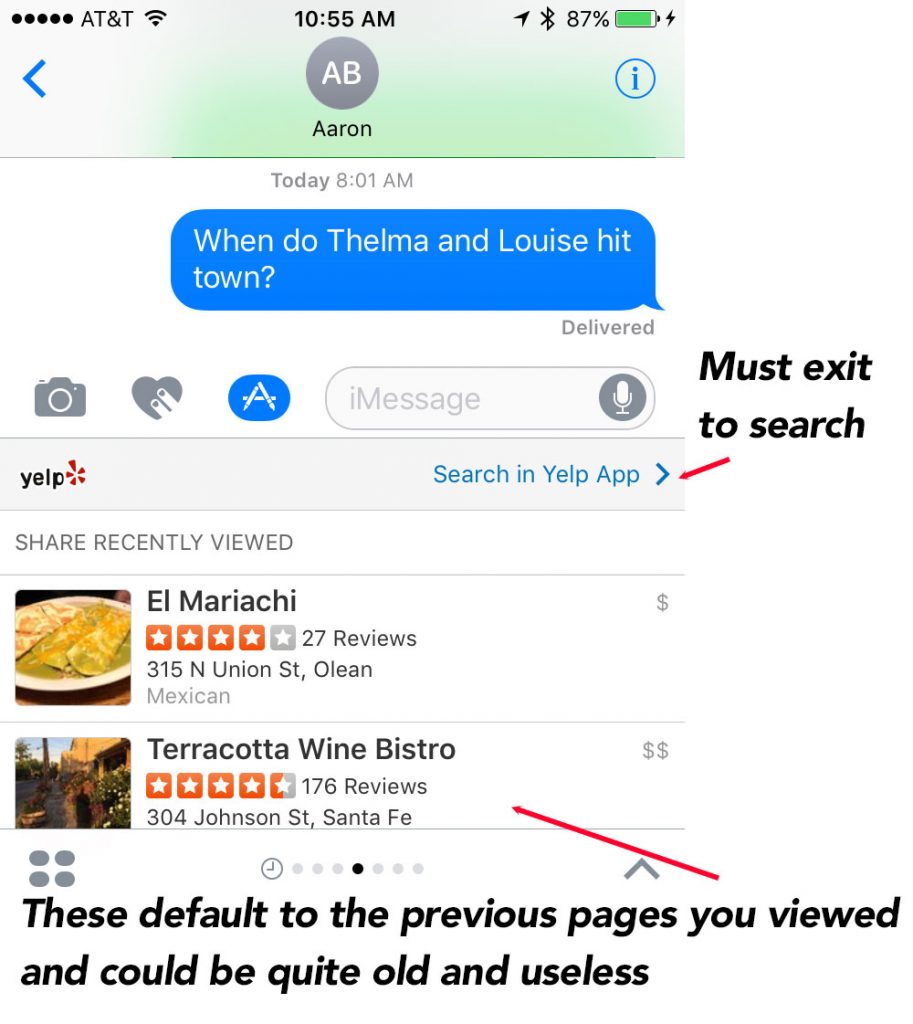 Yelp’s in message app has the most convoluted, least user friendly approach and unlike the other products offered no discernible value to the user. Not speed, not convenience, not additional information and not a transaction. Nada.

The default view from within iMessage is a list of the restaurants you previously looked at. In my case they were from my last trip several weeks ago.

To update the list the the in-messaging applet requires a visit to the mothership App, and there, requires that you don’t just search for a list of appropriate restaurants to share but actually visit the individual pages of any restaurant that you want to share.

Once you have visited the four or five internal location pages, you then need to go back to the iMessage app and share one or more with your message group. Your friends, upon receiving the graphic choices, can click on them for more details but are then again forced to exit the messaging app to visit the page in the Yelp App  themselves.

I was actually disappointed and taken aback. Despite what you might think of their attitude, Yelp is not staffed by stupid people. They have managed to create a name for themselves and utility for many despite heavy odds. And yet OpenTable had figured this out and Yelp hadn’t… I wondered why. In fact I lost sleep over it.

Then it dawned on me. Every Yelp action within iMessage by both the sender and the receivers required a visit to a location page within the app. I realized that much like Yelp makes the transit from Google search to Yelp painful in an effort to drive app adoption, they had obviously and consciously decided to force iMessage users over to the app. If those users weren’t going to go willingly to the app,  torpedoes be damned.

Yelp apparently wants to accrue app usage, page views and ad displays and if needed they will force feed them to the user regardless of the users needs. Whether this Yelp behavior is based on  a desire to “entice” users out of the compelling environment of iMessage to discover the app or whether it is financially motivated by a need to show more ads or perhaps even motivated by their desire to impress Wall Street, it doesn’t really matter. It’s a terrible experience. It is easy to see how Yelp might be threatened by the new environment.

Last week I had trouble fully comprehending the power of using messaging as a transactional platform. But with the rollout of iMessage/iOS10 I can see now why it has been so widely adopted in China. It’s a “natural” for both group sharing and transactions.

Apps with messaging offer up a transitional bridge environment between the plethora of undownloaded and infrequently used apps to the more conversational Siri like interactions of the future. And a powerful one at that and one that will have staying power.

By offering a platform and ecosystem Apple2 (and Facebook3 Messenger and Google4) will quickly create a third leg of the ongoing mobile engagement world. It has been search and a limited number of apps and now messaging. For those companies without a strong App presence, it is a new opportunity for scale and exposure.

Obviously Yelp wants to be a player in the App world and for reasons beyond my comprehension wants to drive users to their app even at the cost of alienating them. They seem to be willing to sacrifice user experience and with it their trust and loyalty in an attempt to gain it.

1 –  Messaging unlike FB or Twitter or Pinterest allow me to interact with my real social circle. These are my children, my wife, my friends, family and business partners. For me it works out to about 15 people that I care about and want to stay in close touch with. Its not the artificial groups defined by follower count and in that sense iMessage and any group messaging app really creates a social network of folks with whom I break bread and engage in social activities. It’s the group with whom I am most likely to decide and pursue transactions whether it be getting a meal, going to the movies or gifting a small amount of money. It is the real social network that we all have and its the most private and otherwise difficult for the search engines and social networks to penetrate and make money from.

2  – Apple, in having the most control over their own destiny will be able to grow and drive adoption of this new ecosystem very quickly. They have a billion devices in the field and upgrades to their devices always happen quickly so most users will have access to this capability. Because it’s occurring within these smaller social groups like family and friends, one user upgrading and adding an app quickly creates the pressure for the other group members to do the same. They will have a place at the table.

3- Even though they don’t control a mobile platform, Facebook has achieved widespread and rapid deployment of their Messenger app. Even I have it on my phone although it doesn’t yet push the notices that I need very well. Internationally they control WhatsApp so they will do well globally. Unlike Apple, they have a huge advantage in having relationships with most small businesses and have made Messenger scale very well from very small business use (autoresponders) to very large business use (API) while providing a forward looking AI development component. They will have a place at the messaging table.

4- Google’s play in this arena, Allo, was just released last week. The product offers the Google assistant and the power of their search entity and entity database. The virtual helper can be brought into conversations without needing to leave the app. If this product becomes default install on the Android it will have an immediate impact although it will be cross platform it will be harder for Google to have success on Apple. For Google to win in this arena they will need to pull out all of the stops and leverage all of their many advantages of scale and services. With that they will have a place at the table. But for the foreseeable future there is no single winner in this battle of messaging behemoths.

@Andy
I would love to hear the internal debates on the matter. I would think that gaining a foothold in a new platform would actually increased habituation and use of their App. And increase the number of downloads. But alas… I am not them.

While I think your take that this is a play for impressions is the most likely explanation (see “Blumenthal’s Razor”), I am feeling charitable this morning, so it’s also possible that this was a low priority development effort for Yelp and they did the barest minimum possible with the intention of adding more user-friendly features in a future update (see “Shotland’s Razor”).

@Andrew your explanation is plausible BUT and is a big BUT the experience they currently offer is so bad as to likely alienate users and inhibit them from trying a more fully formed product in the future.

PS you are being charitable today!!

Yelp is going down hard. People are catching on to the fact that Yelp manipulates which reviews show up for users. Are you a business that pays Yelp for advertising? More of your 1-star reviews will get filtered out. And if you don’t pay Yelp? More of your 5-star reviews get filtered out. If you’re a Yelp user looking to find the best or worst in an industry, those practices aren’t going to help you out. But I guess it makes a pretty penny for Yelp.