Google Local Returns to a 5 Star System In New Maps 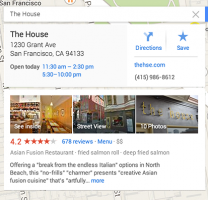 Along with a total revamp of Maps, Google has announced at I/O, the forum and their blog the return to a 5 star review system. You can request an invite to the new Maps here. From their blog post:

Users who opt-in to the new Google Maps will now rate businesses on a scale that ranges from one to five stars. The system maintains the precision of the former 30 point scale while improving the readability and accessibility of the business listings. Your customers will be able to find up-to-date, accurate information on your business faster than ever. As a business owner, you’ll notice that past ratings have been mapped to the five star system.

Here is how the new scores are now calculated:

Some other notes from Google:

To the dismay of many, Google replaced the yellow stars with the Zagat system in May, 2012 when Google rolled Places pages into Plus. It was clear from August of last year that Google was testing a return to the 5 Star system and they were never removed from local AdWords display.

The current iteration of stars appear to be universally red and it seems that they will roll out to all properties over the next few months. The new “Places” results that were spotted earlier will apparently be the results seen when visited from the new Maps interface.

Of course, the Zagat rating are another Marissa Mayer vestige that, when replaced, will confuse business owners once again.

Push me, pull me…. Google lurches towards a solution… You gotta say this… they aren’t afraid of changing paths.

Out with the New and in with the Old… or something like that.

i’m getting dizzy…. a 5 star wooziness each morning when
i check Local 😉

I actually prefer the stars, did anyone notice lately there is no write a review button on a google plus listing using an Ipad. The writing review process is getting out of control. I’m making flyers that give instructions using different devices for mobile phones, tables, etc.

You need to navigate to the listing through the Google+Local app. That’s the only way to see the “write a review” button and be able to write a review.

“Push me, pull me…. Google lurches towards a solution… You gotta say this… they aren’t afraid of changing paths.”

For a company as large as they are, they are remarkably agile… it just takes a little longer to get the point across.

Any idea when it will be rolled out in Canada?

Sometime after the next major update in 2017. 🙂

THANK GOD. They did something right today.

Marc’s comment about agility is true. I worked for AT&T for 11 years and we were always working on last years problem if things were good. The year before if things were normal.

Another step towards packing and organizing everything internally for google. At least it puts something in the users hands.

5 reviews seems to be the threshold for seeing a star rating displayed with a local business listing. Does anyone have any data on how long after you receive your 5th review that the star rating will appear with your business name in search results?

@Ryan
I don’t think that the time is fixed as it has to do with the indexing cycle for reviews. It is usually several days but mileage will vary.