Google: We Can Show Stars if We Want to!

Last week in “It Really Is a Google World and We Are All Just Living in It“, David Mihm observed that the bulk of content above the fold was Google’s. Last week, with the upgrade to G+ local, Google removed the engaging 5-star graphic from regular business listings and replaced them with the bland and less engaging Zagat rating graphic.

Except, of course, on local Adwords. An obvious corollary to David’s “law” became apparent: It’s Our World and We Can Show Stars if We Want to!* 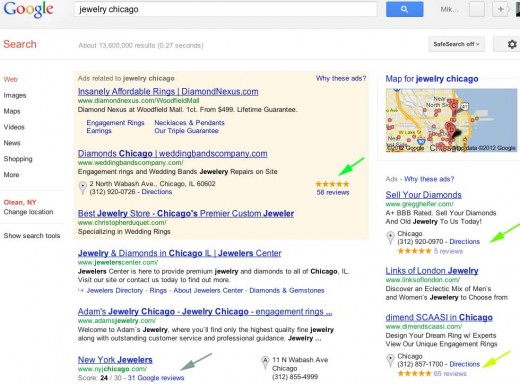 When my daughter was much, much younger we had a bed time routine where we would “say the 5 things” every night before going to bed…. It was my equivalent of a prayer whereby Abby would wish those in her life (both humans and animals) well, both in their dreams and for the next day. It seemed to provide comfort to her that she would have a peaceful and restful night. As she gathered more people and pets around her the list grew to seven and then eight and perhaps even more things.

So it is with fond memories and a nod to my daughter’s petulance that I titled this article.

I just saw this yesterday while doing a search for insurance. This doesn’t surprise me at all.

The listing I saw it for only had 2 reviews, so it doesn’t have anything to do with quantity of reviews like it did with the local listings.

Mike: When we can afford it we run aggressive adwords campaigns. We bid on a lot of keyword phrases. We bid aggressively on price, we run the campaigns 24/7.

In one context the absolutely best tool we have for insights into how to aggressively work on the seo and maps side is the data from adwords. IMHO its the best data available for clues on how to emphasize efforts for higher rankings and where to put that emphasis. Its the most insightful keyword research we have.

Over time we have found that when we have high organic and maps (okay–Google+Local) visibility and high adwords visibility we tend to get far more clicks on the organic side than the adwords side.

In fact in various cases we’ve used some of the adwords insights for various smbs ….to target keywords for further optimization and higher organic/places rankings. It works. When we achieve higher rankings the relative percentage of organic clicks to clicks from adwords increases for the keyword phrases.

Overall though…Google keeps figuring out how to get us to spend more money on adwords. Its insidious. Its why they are so damn big, rich, and successful.

I do agree with your tone. Stars are more eye catching than Zagat ratings. I suspect it will spur more people to click on ads than on organic listings.

It is google’s game. We are all along for the ride….and trying to hold on to that bucking bronco for dear life!!!!!!

Ideally I’d like to see the stars come back into the organic listings, but in the meantime I’ll continue to have them display for certain PPC ads. They really come in handy for ecommerce stores and the like.

@Colan
I think the business needs 5 or more reviews for it to be turned on.

@Dave
Yes there is a positive influence of having pps ads and organic and local results on clickthrus..

@Corey
Ah, ever the dreamer. They didn’t pay $150 mil to Zagat for nothing!

Mike, if you do a search for Houston Insurance you should see a paid ad that only has 2 reviews yet still has the gold stars.

Right you are. For Adwords Express:
Stars and reviews will appear in your ad if your business has more than two reviews and a rating higher than 4 stars.

I thought that it was 4 reviews and 4 stars…. either my memory is failing or Google changed the guideline. Probably the former.

Mike: In your response to my comments…is the 15% click through rate for all clicks an actual number or just something hypothetical? I don’t know what it is or in fact if they publish that percentage.

Frankly they have endless tools to attempt to increase adwords revenues by that 20% number. They could work to get more ads on more search phrases that don’t have adwords activity; they could change the percentages associated with partner publishers, they’ve run endless experiments that might increase percentages on adwords clickthroughs, such as the adwords real estate control of the above the fold screen as David pointed out, the stars as you pointed out, the subtle variances on the shading that differentiates ads, etc etc.

In David’s article titled “Its google’s world” I gave an example how they cleverly push up bid pricing. I know it has escaped widespread publishing…but I’ve seen it in spades over the years with regards to our accts.

They probably feasted on those crummy reseller partners that provide mediocre service that we have discussed. Frankly though the reseller partners give google a “feet on the street” effectiveness that increases overall adwords activity.

Lots of different ways to increase the adwords revenue base by the 20% number you through out. Frankly I think they’ll hit those growth numbers, just in a variety of clever ways…not necessarily all just because they increased ctr’s.

The 15% was a number I read somewhere but it is meant in a broad and rough approximation of the average % of ad click thrus on a typical search result. At Quora Rand Fishkin says that it is 12%.

Point being, which you obviously clearly understood, is that it doesn’t take a big change of Google’s interface to dramatically increase income.

I believe I understood. I addressed the issue in a somewhat different way suggesting different and somewhat subtle mechanisms to increase revenues from adwords by 20% (ie the difference between 15% and 18% per your suggestion).

I think google has many ways to achieve the same results.

Anyways…yeah…stars on ads versus a muted Zagat presentation on PAC results–My instincts tell me the stars are more vivid, eye catching, and will attract clicks. But I believe it is one of many arrows in googles large quiver to obtain higher revenues.

Additionally as it relates to advertising specifically related to local smb’s we somewhat missed this story: http://searchenginewatch.com/article/2182222/Google-Planning-New-Small-Business-Service-as-Part-of-Local-Revenue-Push

@Earl
Not sure where you were, I wasn’t missing the story.

The funny thing is that stars displayed by other sites in organic search (Yelp, CitySearch, TripAdvisor, etc…) are gaining more clicks AFAICT.

Their results now stand out more than the Zagat numbers… if they make it to page 1.

Check this out from a Dr. in the forum

Google+ is destroying my business

“Everything about Google+ seems to be fine if not better than Google Places except for the removal of the stars. Ever since they removed the star ratings, my actions or clicks went from 30 – 60 or more a day to 0 – 5. I am still on the first page of Google for relevant search terms and in most cases I am also the first listing, I am also receiving the same amount of impressions as before, but the absence of the stars has caused an obvious hit on my Google Business Listing effectiveness. Injunction with that, I have seen a drastic decline in business. Is there not a way to compromise and use the Zagat reviews as well as the stars?”

I also had a previous client contact me 2 days ago. (Dentist) Saying he needs to start using AW Express because he needs his stars back.

Mike: I enjoy being voluble, as you once put it. 😀

Visually, conceptually, and probably through click throughs having stars in ads and ZAGAT connected to the PAC will probably pull more people to the stars than the more humdrum looking ZAGAT ratings: More clicks on adwords.

Still Google’s weaponry and clever ways have an infinite number of ways to increase revenues from the adwords side of things: Some of them such as diminishing the shading over adwords/ some of them as David Mihm pointed out by increasing the real estate connected with adwords….some of them by driving more businesses into adwords….and some of them through clever expansion of existing adwords campaigns to increase click through costs through competition.

With all the changes in place and many more to come, I think internet marketing should be getting less attention. My suggestion is to give Google marketing a break and spend your money on alternate marketing strategies. We all need variety and independence in our business strategies.

Google knows exactly what they are doing, it’s a business first and foremost, so those who pay get the stars. I’d rate that a 30 for Google and a 6 for everyone else 😉

Like with Zagat counts, I had to do a retake to figure out exactly what math and scale you were using. Q.E.D.

Very interesting!
From what I can see Google is showing the star rating for Rich Snippet reviews within the website itself.

However I do think that Google is missing a trick, as the stars are far more aesthetically pleasing than the Zagat Rating

Hi Mike, is there any way for local businesses to show their stars in regular old AdWords text ads? Or does our only option = shifting some $$ out of AdWords and into the less customizable/targetable AdWords Express?

It’s been a bumpy ride for us on Google Local – after over a year of duplicate listings, 2 lost reviews, mixed up phone numbers & business details, etc… we rank lower now *in google Maps/Places/Local+* than we did a few months after opening the new practice in July 2010 – but it would all be worth it I think if we could just show our review star in AdWords text ads.

So here’s to hoping that Google shifts gears and decides to allow businesses that have invested their money into AdWords the same benefits enjoyed by those jumping into AdWords Express.

I am reasonably sure that you can get the stars in the regular adwords by turning on location extensions, associating it with your Places listings and there may be some special flag you need to set.

Here is the instruction page.

[…] not everyone at Google thought the the Zagat display was the best choice as Adwords retained the stars.  And it appears that someone in Google local search must agree with […]