7-Pack Upgraded – Stars Are No More, Authorship is King

Google continues to march down the integration road of bringing the new Google+Local pages into the flow of their products. Today the 7-Pack was updated to include the new links and the new review rating system. As you can see from the image if there are more than 10 reviews the new Zagat rating replaces the stars. If there are less than 10 reviews it shows a review count and if there are none it simple goes to the new Google+Local page.

The replacement of the review stars with the simpler and less visually obvious Score is likely to attract less user attention. I will miss the star system as it was an instantly understandable symbol of quality. The Zagat system, while perhaps more granular, will take a while for customers to get used to and lacks the visual appeal of the stars. It highlights why authorship is more important than ever.

Also note that that Adwords Express Ad still directs to the deprecated Places page and shows the old star system so the transition is far from complete. 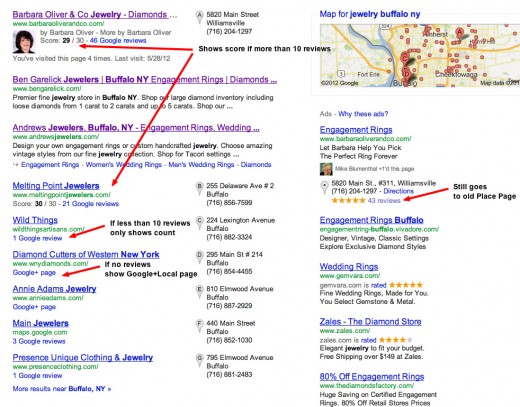 Google has simulatneously upgraded the mobile display to include the new Zagat rating system. The new rating is somewhat more visually obvious  on a small screen. Interestingly, they have not yet returned the ability to leave a review to their mobile clients that disappeared last week. The new mobile display, rolled out several weeks ago, preloads a “mini” version of the business listing data and doesn’t take the user over to Google+ like the desktop does.  You would think that mobile would be the first environment that would be able to leave reviews that could be shared with friends, not the last. 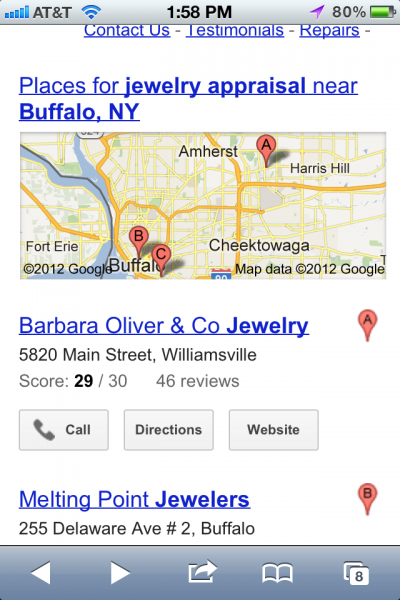 I think Google will find a great deal of resistance in the adoption of their new “forced” model to integrate into their + platform.

@Brandon
At this point there is no “force” to integration for the business owner. The claiming process is exactly the same as it was. I anticipate that when the back end is complte the integration of Plus and Places will be transparent to the business person.

Now for the reviewer that is another issue. The move to full name disclosure on reviews and the absolute requirement to at least have a G+ login might slow some reviewers down…. but even there G+ claims to have 100 million folks with logins already… not a bad user base that is already in…

Are these the former Ratings (reviews with no text) that are no longer displayed.

Oh and to your question yesterday of whether requiring a + account would hinder the review process…. Google has stated that 100 million people already have + accounts. Not necessarily active but good enough for reviews. That speaks to my point about the friction becoming less over time as opposed the stupid “create a nickname” requirement that used to stand in the way.

I am curious 1) if the lack of anonymity will stop many reviewers or just the edge cases and 2) Whether Google will add that feature back in.

I don’t get it. I’ve tried to claim my Local+ page but it takes me back to the dashboard. I clicked on MANAGE THIS LISTING and that was the result. My competitors, have Google+ page link under their listings. I want to accomplish this as well as retain my current review count.

Does this mean Google has not gotten to my Local+ page?

I think their new scoring system is a fail. People naturally associate stars with reviews. Also, why a 30 point scoring system? Why not a more common number like 5, 10, 25, or 50?

Great coverage, Mike – thanks for posting!

I’m wondering whether Google might hold onto the “visual appeal” of the golden review stars for the PPC area.

Obviously some organic search results have the hReview markup stars, but even so, the absence of the stars in the local results may mean that a fair number of eyeballs will gravitate toward wherever the familiar and (mostly) trusted stars are now – namely paid ads. To some extent this is a WAG, but I wouldn’t be surprised if it took a *long* time for us to see the 30/30 review system used for paid ads – if at all.

I have wondered this myself. Clearly Google might see a vested interest in having paid ads showing stars… that being said they are very vested in the new review system (in fact it is the real story behind all the changes this week) and I think that they will push it across all of their properties.

PS while researching this answer I ran across an Adwords Express ad that goes to a “We currently Do not Support this Location”!

I think the stars taken away is just another way for Google to shift their marketing to paid ads. It does not surprise me one bit. With all the changes rolled out this month I think that every SEO company is spinning in circles and waiting for the locomotive to finally stop.

Google will move to a visual indicator of customer satisfaction without making the UI ugly in the second phase of the update. The numeric value is fine, but I would assume it will be changed by Labor Day.

Whew! – of all the times to roll out a change… when I’m out of town messing around with other things. I’m back in Calgary now. Mike, I’m so thankful for the community here. Reading the recent posts about this change has been been extremely helpful, allowing me keep up with the finer points of this transition. Thanks to all of you!!! 🙂

Whew! – of all the times to roll out a change… when I’m out of town messing around with other things. I’m back in Calgary now. Mike, I’m so thankful for the community here. Reading the recent posts about this change has been extremely helpful, allowing me keep up with the finer points of this transition. Thanks to all of you!!!

fixed typo: —> this post is the correct version Mike 🙂

I was shocked to check the SERPS last night and see that our real estate site was ranking #1 on the Places listings for “[ourcity] real estate agents”. We are 20 minutes from the city center and didn’t even come close to the 7 pack before.

I *think* that the reason we suddenly rank well is that we had created a Google+ page in order to establish authorship.

Following on from Modesto, my Places page now shows the zagat score and when I click to manage the business when signed in I am taken to my Places dashboard. My ranking is unaffected so I’m probably ok but I am hoping someone can confirm if I need to claim my Google+ page. I have heaps of reviews and a 28/30 score. I’d hate to wipe that out. If I claim the page does it overwrite my Places page with a new, blank Google+ page? Or did Google turn my Places page into a Google+ page automatically? I’ve read anyone can claim a page, I used the locate function using my tel no and found my business, I just couldn’t bring myself to complete the claim because I’m not sure if I will lose years of hard work on my Places page in one instant!

There is no additional claiming required.

If you claimed the business listing and the Google+Local listing takes you to the dashboard then you need do no more. The Google+Local listing does NOT yet show as verified and wil not until Google takes the next announced step and merges it with the Google + Business page in Google+ (that is the page that you have heard multiple people can claim).

If a business has been claimed to multiple Google+Business pages then when Google goes to merge the Google+Local and G+Biz page it will need to reconcile who really owns the listing. If the email is the same for both then there will be no issues.

Note that the Dashboard, because it is yet to updated, is broken in that when you click “View this Listing” it still takes you to the old Place page. Google is aware of that problem and has said that they would fix it…

Do you think citation building will be/is still just as important as it was before the change to Local+ ? As you know, it takes time for small agencies to create these processes, and it does get a little frustrating when Google makes such a big change like this. Have you seen anything that would indicate some type of shift in how one should go about citations or getting their client to rank in Places?

@Justin
The algo will evolve very slowly towards social signals. I think that we are have been seeing continual, small incremental change in local algo since day one.

What you are seeing telegraphed by Google in this announcement that some day social signals (when we have enough of them and when we know what to do with them) will significantly influence search resutls…what you are seeing is the embryonic outline of a great strategic plan to convert users from searchers to social searchers.

The ranking algo will continue to change but at no different rate than in the past. But what you are not seeing is a radical change in any ranking signal.

I think allot of people will not like the idea of logging in and leaving a review but I think google will just make us all do it there way, because there isn’t another search engine like it.

Thanks Mike. Is the Google + Business page different from the G+ page that I created for me as an individual, and yet also different from the Places/Local page? Does this mean for best optimization and SERPs that we have to manage three different pages, and where should our focus be, or will this all be integrated?

One more for ya’, do you think that the G+ “follow” tab on our website should now point to our G+ Business page, as previously it pointed to my personal page? I clearly don’t have a complete handle on all of this YET!

This new move has now created some confusion because, as I understand it, these clients need a Google+ business account for authorship – is that correct?

Does this mean that I should now create Google+ business pages for those accounts? They certainly are not going to be happy about the prospect of additional charges either!
How would you manage this?
Really appreciate your insight…
Regards
Greg

@William
A Business page is a stand alone page G+ that is created by an individual G+ user. It is temporarily different than a Place/G+Local page but Google has stated their intent to merge them near term. Here is an example of a G+Business page into which a G+Local (Places) page has been merged: Barbara Oliver & Co. Jewelry.

There is as of yet no solid best practice for when to point to the business page from an author point of view. I assume it will come shortly.

@Greg
You need to read my many posts before and after this. Particularly this step by step guide to the process

[…] upgrade to G+ local, Google removed the engaging 5-star graphic from regular business listings and replaced them with the bland and less engaging Zagat rating […]

My adwords express ad in NOT showing reviews and stars.

I’m curious if this recent change is behind the fact that the business I represent no longer appears in the local pack for our main keyword. We were #2 and not we are completely out of the local pack all together, not even on the last page. I have no clue what the reason is but it happened shortly after the g+ fiasco. If you could shed any light on this that would be wonderful.

Unlikely to be the cause