@Webmanagementus of Web Management pointed out this Tracfone Adwords ad that includes a Coupon attached to the ad. I had not seen this previously although Greg Sterling had reported on seeing them in the wild on SEL last week. It clearly indicates Google’s desire to expand the roll of coupons as a revenue generator. It is an obvious fit for local for both Boost and Adwords with location extensions although this current test is obviously neither:

Coupons have had a long a tortuous life at Google. They were introduced in late 2006 and but left to languish for a number of years before seeing some activity in late 2009 and through 2010 with the Tags Beta. 2010 culminated with the failed effort to purchase Groupon.

2011 on the other hand has seen lots of other activity on the coupon front for Google. Besides the new Adwords coupon test first seen last week, rumors of Google Offers, their Groupon competitor, first surfaced in January, with a full blown Offers beta rolling out June 1 in Portland. Google also first rolled out Latitude Check-In Offers at SXSW in March with a limited national test in April. They cancelled the Tags product in April as well. Roll out early, iterate often and shit can anything that doesn’t generate enough profit seems to be the coupon approach.

Here is a chart of Google’s current free, paid and cancelled products…

Much like the trend on Places for links on Google to head off to other Google properties, this new product takes you to a Google page. 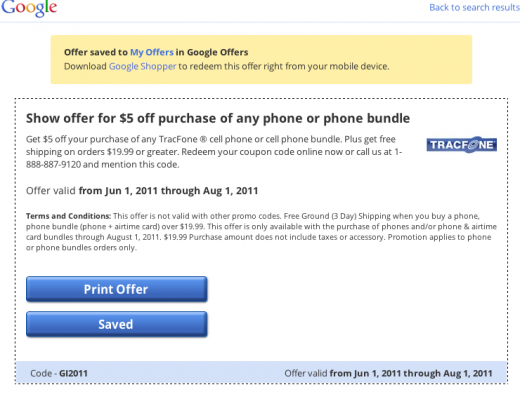 When the View Offer button is selected in the newest Adwords coupon test, it takes you to Google.com/Coupons that either prints or saves the coupon for later use to your My Offers area, the same UI used to save Google daily deal Offers and (I assume ) for Latitude Check-Ins.

“Roll out early, iterate often and shit can anything that doesn’t generate enough profit…” LOL – sounds like something coming out of Wall Street 😉

Now we don’t just get to deal with the bugs but we get to pay for it too boot! 🙂

[…] had a disdain for coupons. Their past behaviors have certainly reflected a certain schizoid, on again off again approach to […]