Despite a deep recession where coupon use is on the rise and an opportunity to make on-line coupons work for a large audience, Google’s Coupon feature has long been the forgotten feature of the Local Business Center.

LBC coupons have been buggy, less than predictable and well, so very hidden from searchers to be of little use to the small business owner and other LBC users. As a result I don’t keep an eye on them much so this new feature allowing coupon creators to more easily link to and promote coupons may have been there for a while. 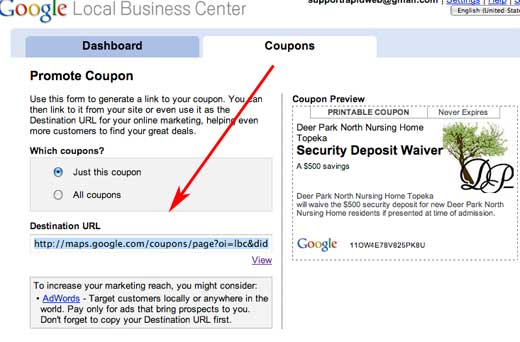 The effort to upgrade the visibility of coupons is of interest to me on several fronts. It seems to indicate that coupons will stay in the LBC mix and that they might just, someday, receive more attention from Google.

However, rather than just providing a link to the coupon, a coupon widget which actually displays the coupon on the originator website would be more valuable option to website owners. That and giving them higher visibility in searches might move coupons from the dark reaches of the Local Business Center out into the real world of local marketing.

On a related note, today is the 2nd anniversary of the introduction of Google Coupons.

Agreed that in their current form, coupons seem to have little value. According to my LBC Analytics, my listing has had over 5,000 impressions in the last month. I’ve received a number of inquiries from prospective Local clients who no doubt found me there. Not a single person who has called or emailed has mentioned my coupon. Perhaps if Google started to show little icons, as they do for Checkout in Adwords, next to those businesses with something on offer, they’ll start to improve clickthrough and usage, but until then it seems to be largely ineffective.

I have had a coupon out there for several years (since its inception whenever that was) and in all that time only one person mentioned it. It clearly is lost in the haze of Maps and needs to be brought to the fore.

Your idea for highlighting it is a good one. A similar but slightly different idea would be to attach the coupon icon to the adword ads themselves…

That being said, Google has plenty of PHD’s on staff to figure this stuff out…I just wonder why they haven’t. It seems like its time to either fix it or remove it.

Actually I have seen visuals in Google Maps (the scissors ) alongside local listings. This probably was an experiment from Google to see if it had a higher CTR because I haven’t seem them for a while.

I have never seen that. How long ago was it?

The google coupon is akin to a trinket. Its a tshatske (chots.ske) (this word is presented for Mr Blumenthal’s delight)
Etymology: Yiddish tshatshke trinket, : knickknack, trinket

Its presentation has been virtually meaningless since its inception.

1. Of the potentiallly thousands of views of a site’s LBC information a teeny teeny portion of visitors ever go into the LBC.

2. Even when there…the coupon wasn’t all that visibile. I’ve 3 business sites with meaningful money off coupons that have been there for a very long time. That is potentially 10’s of thousands impressions.

Regardless, as we have seen, actual linking into the LBC record seems to occur at something like 1-7% of all impressions. Then it isn’t highlighted, falling on the lower portion of the page.

I think we have less than 5 sales utilizing the coupons in the 3 businesses. (maybe 6 or 7).

Its been a trinket…(a tshatske (for Mister Blumenthal)) Nice to look at and talk about but meaningless.

Yeah I agree with most of the comments above – I almost never see the coupon ever mentioned from Google’s Local Listings. A widget that can go on other web properties would be brilliant. It be a great way to even do JV’s with other local businesses in your area. You each trade the widget and add to each others ‘thank-you’ pages. How cool would that be or even if Google’s LBC went as far as to help make those connects – whoa – now we are just talking crazy. 🙂

I also like @David’s idea of adding to Adwords, etc the way they do with Google Checkout – great idea!

Another pet peeve of mine (being Canadian) we don’t get any of the new LBC analytics you all have in the US. Us Canadian just don’t seem to be as important to get the same tools right away. Same with YouTube PPC, Google Check-out, etc. When it comes to Google it sometimes sucks to be CND.

Matt
Thanks for stopping by and commenting.

Google could turn the LBC into one big social network…around not just coupons but verification and other cooperation as well but dang they can’t even seem to get you guys stats in Canada so maybe we shouldn’t give them too many more ideas, till they get what they have fixed. 🙂

Coupons should be used where possible as lots of people only use sites that support coupons. even if it only saves a few pence.

[…] Google’s Coupon feature has long been the forgotten feature of the Local Business Center. Mike Blumenthal, well known local search expert, believes that the effort to upgrade the visibility of coupons is […]

Ooh, isn’t that a clever idea, Mike? A coupon widget. Hmm…I wish Google would take you up on that. I might actually try to make a coupon!

That’s the first I’ve heard of this option. It would be awesome having the mobility to place the coupon where you want to for expanded reach and traffic opportunities. I wonder if Google will begin to actively market this option since it seems to be news to most.

@Miriam – Thanks. Although I always am reluctant to suggest ideas to Google. They have more PHD’s per sq ft than any place I know…and they control the sand box..

@Kathy It has, up to know, been the very poor stepchild of Maps….it is unclear how much if any exposure coupons will get.

[…] simple technologies allow small businesses to accomplish the same results. For instance, Google has offered coupons on Google Maps for some time. Additionally, tools like Twitter allow for easy social media campaigns whether they use coupons or […]

Google Coupons near you : Local Search Optimization – Martijn Beijk
September 2, 2009 at 9:41 am

[…] me this appears to be new. It looks like this is yet another effort by Google raising visibility for coupons. I wonder if this will attract more business owners to get their business listed and add coupons […]

[…] requiring an ending date be applied to all coupons. In August 2009, Google allowed businesses to link directly to their coupons. Last November, Google created an option to show coupons in the mobile […]

[…] They were introduced in late 2006 and but left to languish for a number of years before seeing some activity in late 2009 and through 2010 with the Tags Beta. 2010 culminated with the failed effort […]