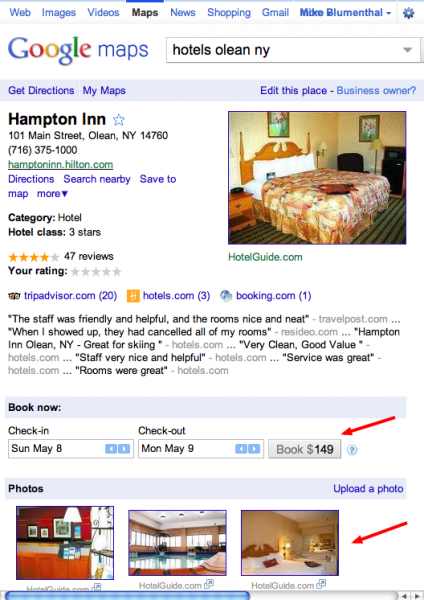 Google continues to make upgrades to Places and Maps having recently announced a wider rollout of Google Business Photos. As noted last week there have been a number of changes/additions to Places pages themselves.

Adam Dorfman of SimPartners pointed out this additional visual upgrade to the Hotel booking feature. The new emphasis makes the feature more obvious by adding its own subheading, emphasizing the dates and bolding the price on a contrasting color.

Another change that occurred last week was that the photos, which had been much lower on the page, also are now appearing above the fold.

Google has often indicated that they will continue to change and move the content of the Places Page based on their perception of end user utility. If that is the decision criteria of how they reached the current layout the implications are not quite believable.

By that logic the review totals being duplicated above the fold implies that Google’s own reviews and fully formed review content are somehow less valuable than 3 party review totals. Google would also have to argue that users really want to do little more in Places than book a hotel.

It would seem that politics, business relations and income considerations more likely explanations for the new layout.

Mike, I’m pretty sure I saw the “Book Now” section still back in April. I actually wrote a post on these changes a couple of days ago (here is already May 7): http://goo.gl/cKHQ7 (in case you are interested).

The booking started last November. But the visuals have recently been upgraded

Yes, exactly. I was referring to the section “Book Now” that now appears under the description (if there is such) and over the Photos & Videos section (as shown in the screenshot).

Will google create an online booking system for hotels and accommodation? At the moment my listing has the opportunity for someone to book using places but only via expedia, booking.com etc . I’d like to know if there’s a google friendly online booking system out there that gets picked up in places alongside the OTA’s

Google has noted that they will create a booking system that is open to all … at some point. At this time the booking system is only working with a few OTA and a few high end independent chains.

PS if you use a non keyword author name your posts will be approved more quickly.

Google Hotel Finder Experiment – A Peak at the Future of Local Search as Interactive Content | Understanding Google Maps & Local Search
August 1, 2011 at 5:01 am

[…] course, it is not just a view of content but offers the option of booking the hotel via their still secretive hotel booking tool. All in all it is in impressive experiment with a subtle transactional nature. It is both more […]