Google has handled Mapspam reporting in an ad hoc fashion since it was first identified as a problem in Maps almost a year ago. Despite Google’s recent efforts at tightening up the LBC interface, reports of large scale Mapspam seem to keep coming in. There has never been a formal reporting form on Google’s site for mapspam nor a Google defined procedure for alerting Google to a specific Mapspam instance. Google does read Local Blogs looking for reports and the Google Maps for Business Group has provided a venue for highlighting mapspam. But from where I sit their efforts have been minimal.

Google rarely responds to the mapspsam posts in the groups and often seems to ignore them so one can never be sure if they have been read and if the reported spam will be removed. I received several emails last week that reinforced my belief that Google needs to formalize the process of Mapspam reporting, provide specific tools for the process and aggressively police the index:

I have been trying to report a company spamming the google local business directory for months now.

When you search for a locksmith anywhere in Sydney, dr lock (www.drlock.com.au) is listed in sydney over 500 times. For example search on Locksmith Parramatta Australia.

I can assure google that there is no locksmiths in Australia that have over 500 offices. It it makes no sense for a locksmith to open 20 shops in the same suburb. I would of thought that it would raise some eyebrows at google…..

A group of local locksmiths including myself are looking to hire someone who can bring this to google’s attention.

Is this a service you provide? We are happy to pay for your time and effort to remove this guy from google maps.

I have filled in the spam form a few times, and i have also been emailing back and forth someone at google in Australia…..

here is the emails i have been sending and receiving. They have been to someone in the adwords department as they are the only email address for google that i could find in Australia.

It would be nice if there is a form dedicated to naming and shaming people who spam in this way. I would think that surely google know it is impossible for a locksmith business to open up 40 shops in the one suburb, or 500 in the one city

i appreciate an help or direction with this problem
Thank you

In the end a locksmith from Australia shouldn’t have to contact me for help with this problem. He shouldn’t have to wave money at me and I should not have to write about it. It shouldn’t take several months and endless fruitless efforts on his part to find a solution to an obviously unfair situation.

It is time for Google to step up to the bar and provide typical business people with an obvious means to report these problems and a clear cut procedure for dealing with it. The time for me to be the industry watchdog has passed and Google needs to accept full responsibility for solving this problem. That means:
1)Providing an obvious reporting mechanism
2)Responding aggressively to reports and removing the reported spam
3)Google should be proactively searching for and removing Mapspam on their own initiative
4)Continue to make it more difficult form Mapspam to enter the index.

Here is a screen shot of the Australian Locksmith Mapspam that the emailer is complaining about: 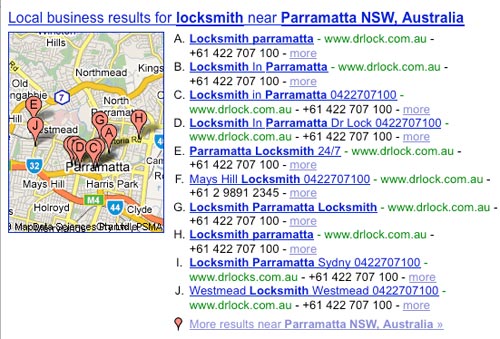 If anyone from Google Local is listening, let me again propose my idea of a URL filter for the 10-pack, except in the case of branded searches of course. Give Dr Lock one slot & leave the other 9 for independent locksmiths or local firms. There may actually be cases in which a larger company does have several locations in one town — this is not spam (though Dr Lock is clearly going over the top). It should be easy enough for Google to display the best result from that company in the #1 slot and open the other 9 up for a broader variety.

Mike: I couldn’t agree more. I was under the impression they created a program in your last interview with Maslam that dealt with this.

But from what I am seeing, Mapspam is at a whole new level.

Some businesses create multiple URL’s and submit the same business over and over with different phone numbers and business names, etc.

This is enabling Mapspammers to control one, three and ten boxes.

There is also the problem of bogus reviews and false reviews that are truly hurting businesses.

Keep up the good work Mike.

[…] Mike Blumenthal called for Google to create a formal solution to this problem. We definitely support this idea. […]

Yes, your solution would create a much fairer environment and would be one solid step towards putting me out of a job (hooray!). It would limit the impact that spam has on a desktop search as well as not favor multi-location operations…but it should also be implemented in Maps as that is the primary interface for mobile devices…

That being said, Google has plenty of sharp engineers and I am sure that these ideas have occurred to them as well. It strikes me as a matter of will not intellect that they have not implemented a system that is more fair.

[…] friends and neighbors in Local Search spend a lot of time calling attention to bugs and spam in Local Search. Having watched florists, locksmiths, plumbers and canoe resellers pull out their […]

“propose my idea of a URL filter for the 10-pack, except in the case of branded searches of course” – How do you propose Google can define a branded search? Unless they adopt the algorithm that calculate Google Sitelinks.

A search of “Locksmith Melbourne Australia” shows 7 of the 10 results as “Capital Locksmiths”. Same phone number, same website, just different suburbs. They have listed 30 physical locations to get greater exposure. I have emailed them and they dont want to remove their spam.I reported them in the google forum but its a lottery if anyone replies.

There isn’t a locksmith in australia with more than 3 offices in one City!
Capital Locksmiths are clearly doing what DRLOCK did a few months back. It took months for his spam to be removed, i hope Capital Locksmiths spam is removed much quicker

Does anyone know when a formal solution to google map spam will be rolled out? 1 year? 5 years? why is google allowing this to effect so many honest businesses.

I refuse to believe that there isnt anyone smart enough at google to find a solution to finding and removing spam.

Mike Blumenthal, I hear google are hiring! PLEASE APPLY and kick some ass in there!

[…] to a great deal of frustration on the part of small business owners and LBC users. In July I noted: It is time for Google to step up to the bar and provide typical business people with an obvious […]

Can we talk about yellow pages ? They seem to be selling map spam now , have a look at
http://www.google.com.au/search?hl=en&q=locksmith+hornsby&btnG=Search&meta=

You will see hornsby locksmiths have over 5 listings by yellow pages , you will see the same results over and over ,look at independent locksmith
http://www.google.com.au/search?hl=en&q=locksmith+parramatta&btnG=Search&meta=
same , more then what is needed , and making the maps useless ,

Large company’s using yellow pages for mutable spam listing , under different names and different number , most of the time its the same thing over and over , and its clearly no to the benefit of the user, Lets talk about yellow pages brilliant idea to sell spam and how much money they will make and how useless the google maps have become because if it.

Their is more and more examples of this in all kinds of trades across Sydney , and soon it will be offshore company’s selling the same thing, I know of 2 other then yellow that are getting into gear for this and are selling the same thing , It ends up being one big spam fest , I see you tried so hard to stop spam , but you cant stop yellow pages or the other two componys you are yet to see

Yellow pages access to Google maps is nothing more then a venture to raise more money, With Google saying the maps are free and useable by the public, its strange how high paying yellow pages customers are getting preference for what use to be a fair and public search result that is controlled by the people who pay the most to Yellow pages.
They have listed company multiple time and removed other listing from showing, even giving the whole map to their customers over any other listing?, how they have done this is between yellow and Google , but the people who really suffer is the end user. When you read the terms and condition of use for the Google maps it states what you can do and what you cant do, But yellow seems to be allowed to brake the rules, and if the end users is limited to only one search option and only one listing , Well that’s ok because yellow pays Google for the privilege, so its no wonder yellow has such control to promote their high paying customers. Good free maps listings that gave the user the most accurate information has now become a thing of the past as more and more big yellow customers take over the local listings. I would prefer to pay Google for the map listing rather then yellow , They must of paid a lot of money to get Google onboard , as the yellow programs are dieing compared to Google “ Why would you want to join up with a less successful company ?. I can only think that Google has changed its mind about not charging for the maps , now Google has its new friend collecting the money, so they don’t contradict their original game plan.