Mapping Marketshare: Maps Up, Mapquest Down & Yahoo Local is UP!

Google’s addition of the Local 10-Pack piqued my curiosity about its affect on Maps visitation. As I reported yesterday, according to Hitwise, visitation has gone up on the order of 21% since January 23rd.

This begged the question of, at whose expense was this market share gain by Google. In the past MapsQuest has suffered in direct proportion as Google has gained market share in the mapping world. Yesterday, Heather Hopkins, Hitwise provided a current chart comparing market share of Mapsquest, Google, Yahoo & MSN: 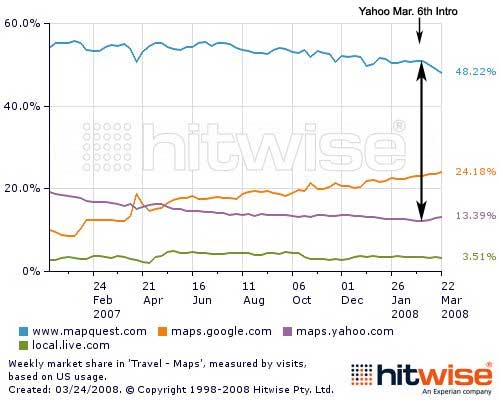 â€¢Google’s market share has increased 1.98% since the January 5th.

â€¢Mapquest’s share has declined 2.03% in that same time period.

Clearly, the 10-Pack had its desired affect for Google of passing more users into Maps and away from Mapquest. That was to be expected and had been seen in most previous Google “upgrades”. The rate of change though, if it continues, is alarming and could portend a Google leadership position in the mapping market sooner rather than later.

More surprising to me was the upward bounce that Yahoo received from their March 6 Local announcement (see: Yahoo! Maps Updated With New Data and Functionality!) and the obvious effect that it has had on MapQuest’s market share.

Yahoo Local had been in a steady market share decline for the previous year. This upward swing indicates that it is still a 3 horse race and that MapQuest needs to be looking over their shoulder for both Google and Yahoo. Perhaps Yahoo can stem the general downward trend in their market share with their promised upgrades in 2008.

A 2% loss of market share in less than 2 months does not bode well for Mapquest maintaining its market leading position if its makert share erodes with every upgrade from both Google and Yahoo.

Here is the January 5th Market share chart from Hitwise chart for comparison: 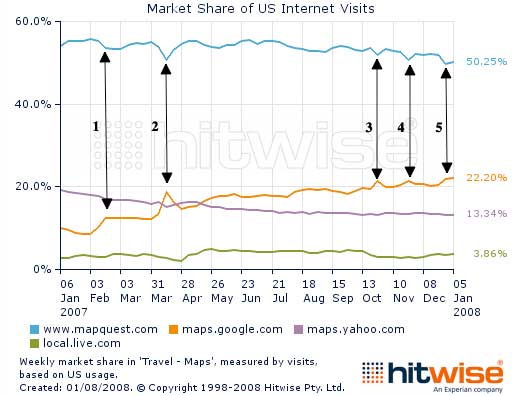 […] has a related post showing traffic comparisons for the four major mapping sites, reflecting the continuing growth of […]

The thing I hate about these stats is that it only sites maps.yahoo.com which is just the maps portion of yahoo not the local section which is at local.yahoo.com, but for google they use maps.google.com which accounts for all maps and local searches. So I can’t see that these stats are super reliable until they merge local.yahoo.com and maps.yahoo.com to get real statistics. It has always bugged me that they always do this, perhaps it is because I am an Yahoo! Evangelist, lol.

That’s an interesting point that I didn’t realize.

Although it still have validity in a relative sense particularly looking at the comparison over time. It doesn’t speak to Yahoo’s total strength but it does speak to Mapquest’s decline in the mapping arena.\

Stephen, you make a good point. I have forwarded an updated chart to Mike that shows MapQuest, Google Maps and the combined Yahoo! Local and Yahoo! Maps on a chart. This might make a good update.

At Hitwise, we try to report each domain separately but because of how Google Maps reports its local results we can no longer separately report the Google Local traffic.

Also, FYI, the percentages look a bit different in the new chart. This is because the traffic share is provided among All Categories of websites rather than among just Maps websites.

[…] week in, Mapping Marketshare: Maps Up, Mapquest Down & Yahoo Local is UP! a reader noted that it was unfair comparing Yahoo Maps with Google Maps since Yahoo split out Maps […]