I have noted in the past that Google very much controls their own destiny when it come to traffic to their Maps product. In early January, Heather Hopkins took a year long look at the growth of Google Maps traffic at the expense of Mapquest. Google has often made changes that has improved their traffic while negatively affecting the traffic of their main competitors, MapQuest and Yahoo. You can see a graphic illustration of their power to control their own destiny in this chart.

The January introduction of the Local 10-pack is another obvious example of this trend. At the time of the 10-pack introduction Google clearly indicated that they were striving for increased consumer awareness of Maps. On March 18th Google’s Hanke noted to Greg Sterling: (Hanke) wouldn’t tell me specifics about whether traffic to Maps had increased as a result. However, he said that Google was pleased with the change and it was having the desired effect.

This morning, Heather Hopkins has provided me with updated Google Maps traffic figures that confirm a roughly 21% upswing in Map’s traffic over the past 2 months since the official Janaury 23rd introduction of the Local 10 Pack: 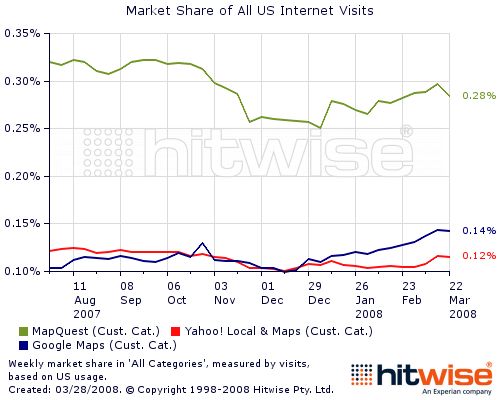 It will be interesting to see if this growth came once again at the expense of Google’s competitors, MapQuest and Yahoo. I am betting that it has.