Last week in, Mapping Marketshare: Maps Up, Mapquest Down & Yahoo Local is UP! a reader noted that it was unfair comparing Yahoo Maps with Google Maps since Yahoo split out Maps and Local into two products. Heather Hopkins of Hitwise has redrawn the graph to show Yahoo Maps & Local. She has also represented the data as a % of total internet traffic as to give a sense of scale. 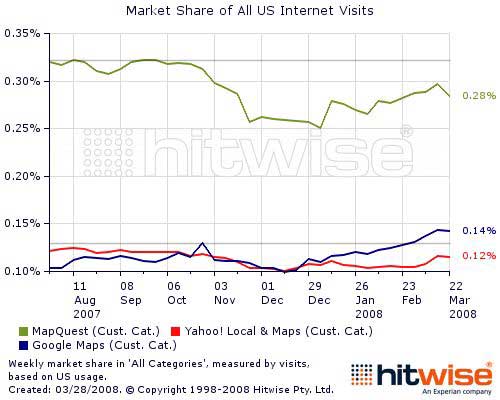 â€¢Obviously when you compare the broader view of Yahoo it is in much a much closer race to Google than it appeared. Also note that Yahoo has a YellowPage directory as well that was not included.

â€¢That being said Google has gained significantly against both Yahoo and Mapquest in the period analyzed. Yahoo is essential flat and Mapquest has lost significant share.

â€¢The Chart reconfirms that Google’s changes in the thrid week of January have paid off as has Yahoo’s changes in early March.

Woo! I’m famous “Last week in, Mapping Marketshare: Maps Up, Mapquest Down & Yahoo Local is UP! a reader” …. That reader is me!

That’s you all right. It just didn’t seem to flow in the text so I left off the Stephen Espinosa. I can edit it back in if you prefer 🙂

I have asked for a tally with yp.yahoo.com as well. But it is interesting 1)to see how close they are and 2)that Google has made some gains against the aggregate of Yahoo Maps/Local since early January.

LOL. No need to change, just thought I would start off the comments. My name never goes good with anything.

[…] Comparing market share and market share trends between Google Maps and the various Yahoo local properties is complicated by the fact (pointed out by Steve Espinosa) that Yahoo spreads their local traffic across three sites: Yahoo Local, Yahoo Maps and Yahoo Yellow Pages, […]