Transactions in Local Search via Google’s Reserve with Google tool have historically been limited to Knowledge Panel results.

It appears that this transactional capabilities being expanded or will be expanded to include embedding calls to action directly into the Local 3-Pack search results. And given Google’s obvious expansion of the Reserve with Google we can expect to see these sorts of results in many new verticals going forward. 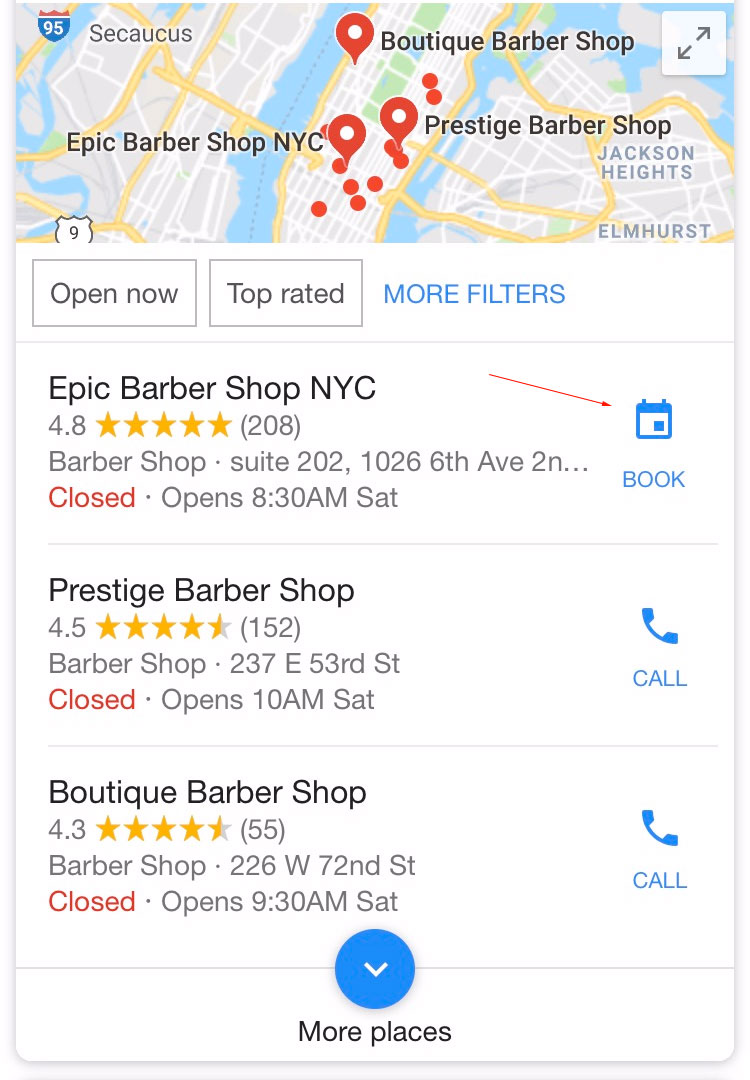 At that time, it was initially focused on Spas and Gyms that worked with a limited set of 12 scheduling apps.  In April of this year, restaurant booking using the Reserve app was added via OpenTable.

Subsequently Google expanded the number of scheduling app partners to now having 36 partners with an additional 33 partners “coming soon”.

Google has moved into new verticals with their reserve tool beyond those mentioned above. We know that Google is allowing for restaurant order take out via the Reserve with Google tool (or something very similar) using their “on-demand platform“.

We have also seen Google’s on demand tool showing up for Hotel bookings.

[Update] Tom Waddington pointed out that he has just stated seeing Reserve with Google showing up in the Garage Door category as well. Home services is an obvious area but one that I had not yet seen.

The coming soon list includes Yelp, TA, Eventbrite, Thryve and CouresHorse to name but a few partners. So we can anticipate starting to see many, many more transaction types in the Knowledge Panel in areas perhaps as diverse as education, professional services, home stays and who knows what else

And if the above search is any indication, we will start seeing these transaction capabilities directly in the main local search results with ever increasing frequency as Google’s local search becomes ever more transactional in nature. 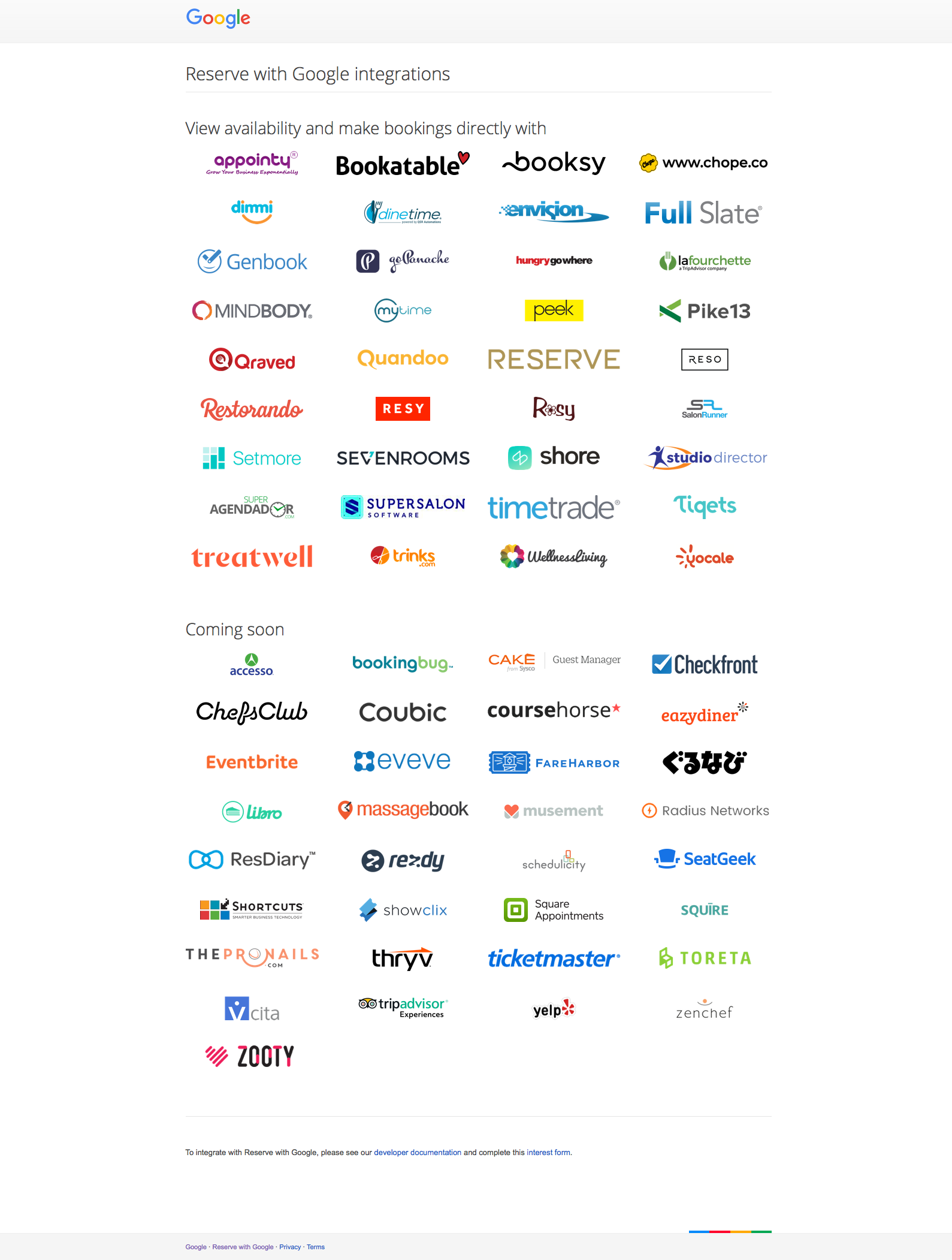 It’s curious how this is going forward; It is simply synched with every business’ agenda, or do they have to move everything to their tool (connected to GMB)?

Even if it Local, will the next steps be launched worldwide? I am LATAM-based and I work mostly with Argentinian businesses.

@Jose
A business needs to be using one of the “anointed” partners shown in the list above.

It was released in Canada in February. And I think in the UK but I am not sure about a worldwide rollout.

Recently I found* this disallowed URL in Google’s robots.txt: https://www.google.com/maps/reserve/search

That shows you all the businesses near you that offer scheduling/booking.

This is a great tip. It would be awesome to be able to pass in geo-coordinates to see how RWG looks from different locations. Wonder if that’s possible..?

Google Reserve offers a great user experience across Google Maps, Desktop, Mobile, and voice search. The impact was minimal for spas and gyms because most of them were already using those same softwares/partners on their website or as POS.

Large businesses could develop the Google Reserve API and reduce cost but smbs will be stuck with their partner and pay a fee to keep offering this convenient feature.

Google is trying to monetize so much the KP. Some of our restaurants have already this Google Reserve CTA + a business page ad (previously called page place ads). The convenience factor may attract more users but as of today, those platforms cannot provide detailed reporting that would that it drives incremental traffic rather that just stealing brand traffic that would have previously clicked on the website URL.

@Thibault
Are any of these CTA’s for restaurants showing up in the 3 pack?

@Mike, @Thibault,
Did you try to look into “claiming” the Book button and seeing if you could sell directly through it and avoid using third party resellers? My client has full functionality on their site to sell tickets and would like to be able to sell directly on their Knowledge Panel instead of having their visitors buy from ticket resellers. They are already losing traffic due to the Knowledge Panel and now their on-site, direct ticket sales are going to be affected too.
@Thibault mentioned something about developing your own API – do you have any insights or resources you could share?
Thanks you much!

Etela
The booking button ONLY works with Google’s booking partners. In some categories Google offers an alternative Appointments URL which can go wherever you want. But it’s just a small call to action and not very visible on the business profile.

In terms of the API see google’s My Business API docs:

You would need to look at the Google Maps Booking API documentation: https://developers.google.com/maps-booking/

I couldn’t find the information but my understanding is that Google will favor a third party for a single location but there are open to let a large business with several locations develop the API if they can meet the requirements like a third party would do.

@Mike, @Thibault,
Thanks so much for the insights. I will look into it more but my client only has one location so I assume we don’t really have any options…. 🙁

@Mike
I have not seen it for restaurants. They’re definitely still testing it in the KP for other categories. Someone from the Google Maps Reserve team shared they were testing different CTA messaging and ‘Find A Table’ for restaurants was top performer because there was less commitment compared to a “Make Reservation”.

Thanks Mike – That list of “coming soon” is not getting any shorter. Slow roll to bring on more options. I keep waiting.

Very cool that this feature is getting more visibility!
It’s a little frustrating that I’m still not seeing this option on all my clients, even those whose competitors are able to use the booking feature in a similar location. You would think that we’d have the option on the backend, but we’re still not seeing it.
Do you know why this is not fully rolled out yet for businesses who do already use software that is integrated with Google Reserve?
Thanks for all you do, Mike!

@danielle
What industry are you in?

This is for a client who’s a dance studio in NJ. There are some other studios in the area that are showing this feature, but I’m still not seeing it on their backend.

@danielle
It could be based on your category chosen. Check the ones with scheduling and see what category they have.

The competitors I’m looking at have the same category – but they are just out of the same area, (NYC vs just across the bridge in NJ ) Still not many studios see to be taking advantage of it if it is available in their area.

Google has also added financial services to the vertical list – for example, search for “Credit Union in Portland OR” will show a list of credit unions, and you’ll see a “BOOK” button next to Rivermark CU.

I’ve been maintaining a quora article on RWG which also lists the application areas and verticals for each active RWG vendor, as well as include good articles for reference (including this one).