Google Home Services Ads were first tested in July, 2015. In August of that year they went public as part and parcel of Google Adwords Express. We have also seen it tested both without and with the 3 pack.  And as of yesterday we saw that Google was promoting the product’s use strictly by phone.

When Google Home Services was first introduced it was only available in very few verticals; plumbers and locksmiths and shortly after house cleaners and handymen.

The Google AdWords inquiry form does have a field for “other” and Peter Troast of Energy Circle sent me a screen shot of its recent use for the HVAC industry: 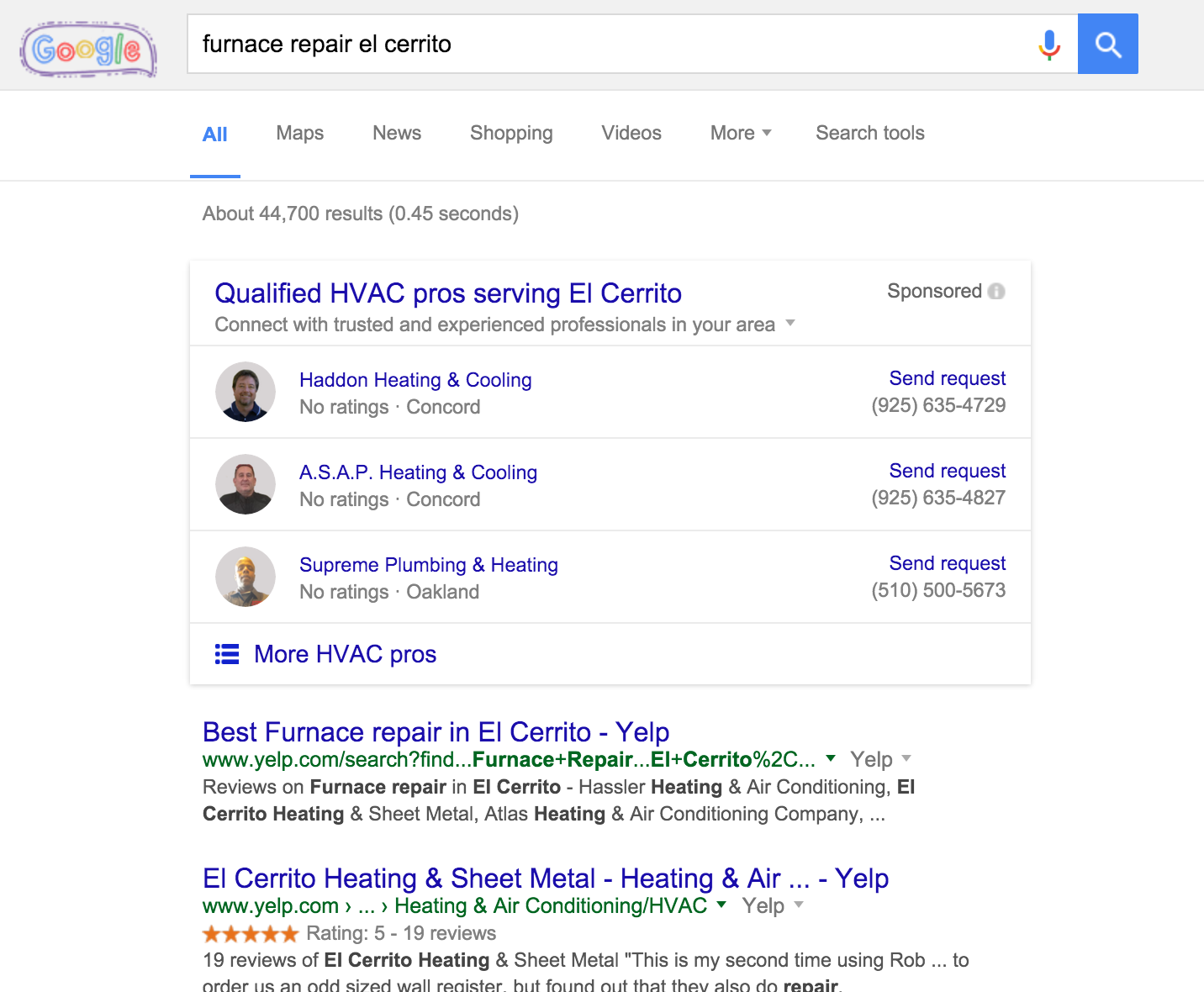 While we have seen slow and steady testing in different verticals we have seen no real significant expansion of  the area where the ad is available.  It was and is currently only available in the San Francisco Bay area and south to Los Gatos.  Here is a map I created showing the cities currently accepting ads for the programs (list of cities was provided to me by AdWords support):

Given the very slow rollout, limited geography and Google’s many cancelled attempts at lead gen products like insurance quotes and car leads one has to wonder why this has not rolled out any faster. Is the product going to roll out and they are just working through the details? Or is it like the two mentioned above, just another test that will be axed sooner rather than later?

So questions for you all:

What do you think? Are Home Services Ads a keeper for Google?

Are you seeing verticals for Home Services ads besides the ones mentioned?

Are you seeing them outside of the cities that the Adwords support rep sent me?

Here are a list of the cities where it is currently available.

My career is in insurance so I would like to comment on the insurance attempt Google has tried in CA. It was a bust many of you know, but they didn’t really say why. If you look at the options many companies were hesitant to participate due to various compliance issues. Although you can go to a Medigap insurance quote site, a health or life insurance site, for quotes; and see all the companies and plans side by side, auto and property insurance is a different beast. There are a lot of moving pieces and parts for a combined policy, which doesn’t always lend itself well to an apples and apples comparison. I think trying to take the human advisory element out of important planning particulars isn’t what the consumers want.
Now will they want to call google if they want a plumber? I don’t want to call someone from the 3rd world to order a plumber, I don’t trust Google in it’s “infinite wisdom” to choose for me. Considering they change their algo every year it seems, I am not comfortable placing my needs in the hands of their employees (with regards to yesterday’s article featuring the call google header).
With regards to Home Ads, Google gets almost all its revenue from ads, so the fact that they keep pushing organic results down doesn’t surprise me (4 ppc ads, and 3 pack covering 1st page before scrolling down for organic results).
Plain and simple google wants to get into the lead business and make per lead profit margins for local “need to have” services.

I haven’t seen ads from businesses out of those areas, but I have a handyman client in Diablo, and the sponsored ads for San Jose show above the snack pack when searching “Handyman Diablo.” Diablo is about 45 min – 1 hr drive northeast of San Jose.

As an owner of a small plumbing company I can only pray that this program is axed or doesn’t expand to other areas. Dubbed as the “Uber of home improvement” it’s clear that contractor choices will be based on price. Yes there will also be reviews, but keep in mind these reviews for small owner operated companies are fluff. When someone has a negative experience with a service provider that was just inside their home, they are likely to keep that to themselves. Leaving a negative feedback on a small owner operated company is too much of a personal attack.

Personally I’m pretty happy they haven’t rolled it out. I’ve worked invested both a lot of time and money into my regular website just so I could place in the maps and then they came up with this… Oh well. The one thing you can count on it seems is that Google is constantly looking to bend you over in some way or another!