Last week I reported that MozCast was showing a decline of over 60% in display of the Local Pack on Google after the recent local algo update. Moz was gracious enough to share their data and it was determined that their search queries had been obsoleted  by the update. So while their data was internally consistent they were likely overstating the drop.

I reached out to Darren Shaw at Whitespark and he agreed to analyze their historical ranking data on any decrease in display of the Local Pack as 1)they have a larger data set and 2)they set location differently (not using the near parameter).

Whitespark’s results? A 24% decline in display of the pack during the two day peak drop (using the same date range as Moz). Not as large of a drop as indicated by Moz but a significant drop none the less.

Like Moz, their data show a small recovery subsequent to the initial multi day drop . 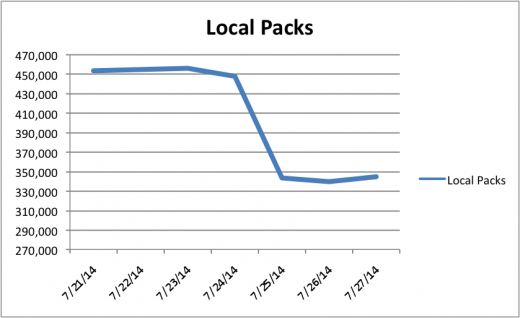 From Darren’s post: Terms that appear to no longer be triggering local packs (based on our rank tracker data and some manual testing):

What is reality? We won’t ever know exactly how many Local Packs Google has stopped showing nor do we have any way to easily validate any of the methods used.

We have determined that the Moz methodology, while internally consistent, is likely over reporting the drop. Whitespark is setting location differently and is thus able to overcome the limit of the Moz report. Google though, has a great many tools at their disposal and we have no way of knowing how either data set measures up against searcher realities.

Moz’s data are meant as a real time directional view of the data and in that sense served their purpose. Whitespark’s data, on the other hand, is a retrospective review of actual ranking reports.

Whitespark used a search parameter than did not change as much and has a larger data set than Moz. While Whitespark’s sample is larger, it too could deviate from reality as the phrases used are keywords chosen by businesses as “money terms” worth tracking and don’t necessarily reflect the full reality of search.

That all being said Whitespark’s number is probably closer in size to reality than the Moz data as both anecdote and methodology seem more consistent in their results.

There was a big drop. Phrases that previously returned a pack do so no more.

We will not ever know the exact size of the drop but it was likely not as large as originally reported. It is still big.

A number of businesses will be affected.

The changes are probably still occurring although at a much slower pace.

It’s a good reminder for us not to over react to initial stories. Our insatiable appetite for “content” (i.e. something to share) drives a lot of hype.

Still, in this instance, there was a real story. As you say, the drop was big. It’s a significant change and I’d guess over the next few weeks we’ll discover even more of the long term impact, both good and bad, on businesses.

Thanks for staying on top of this one, Mike.

@bill
The proof, as they say, will be in the analytics…..whether local sites have more or less traffic compared to before the change.

even the DUI rule isn’t true across the board, as in the search “DUI Lawyer Salinas CA”. Strange Things are afoot at the Circle K

Some of the terms that appear to have been dropper are still showing but only in limited markets. I’m still seeing a 7 pack for ‘dui lawyers’ in New York, Boston, Austin, and St. Paul but only for dui lawyers, not lawyer or attorney(s).. Realtors and emergency plumber are also showing a 7 pack in some larger geos but seems to be super rare.

The list of terms that were provided are all high value KWs…Hmmmm, Google manipulating their AD CTR again?

Good to see some non-Moz hard local data. Seems like there’s only one thing consistent in local search at the moment and that’s inconsistency. My guess is that there won’t be any kind of ‘easily correlated’ data coming out of this. It’s no doubt being felt by local businesses and by the companies that have focused on serving these types of businesses.

Another lesson to agencies from google: focus on ppc, not local. Previous lesson was regarding traditional seo.

Moz’s data was probably overstated, but do you believe that there are less PAC’s? Whitespark’s data suggests there are. Moreover there is commentary that 7 PAC’s are often replaced with 3 PAC’s. OTOH, there are reports of some PAC’s expanding. Some of it depends on the types of verticals.

Now my question is the following: If overall there are less smb URL’s and links showing in the google serps, what has replaced them??? Directories???

Every time something changes w/ Google’s local algo, I think of the scene in Airplane where everyone is going berserk and Lloyd Bridges says “Looks like I picked the wrong week to quit sniffing glue.”

I keep coming back to the verbiage in last weeks SEL announcement, that Google is going to deliver “…search results that are tied more closely to traditional web search ranking signals.” Where did they get that piece of info about the signals?

Re Scott’s last comment. I wonder about that too.

PRE-update there was def correlating with pack ranking order, VS pure organic ranking order. Barring listings that had penalties or were outside the radius or had some other problem on the local side of the fence – the pack order totally mirrored the pure organics.

Now they don’t. The top organic listings don’t correlate that well with organic.

I was analyzing small town, low competition markets that typically don’t optimize much, in order to try to see how Google is ranking pure unadulterated rankings that have likely not been manipulated.

There are LOTS more pure unclaimed G+ L listings with no site attached in certain packs. So those don’t have organic SEO factors, because there is no site at all.

Top 2 listings no site, just unclaimed G+ L pages. Then further down another listing with no site. So out of this new “more traditional web search factors” 7 pack – 3 have no website.

And businesses that have better optimized sites that USED to rank last week, no longer do.

No matter what angle I look at it from, this algo does not appear to add up or make sense.

I think this algo has one primary goal.

I’ve always found Google Local to be pretty confusing and annoying. There are so many search terms here in the UK that will yield the 7 pack and the ordering seems to be nothing more than by the distance to the centre of the location. Some of the results often have no website at all.

On one hand, I think it has been a failed mission from Google, but on the other I think it’s given smaller businesses a helping hand in ranking for competitive searches against bigger brands.

So based on google slowly doing away with the 7 pack does that mean the only way to be seen in the future is to run pay per click campaigns?

It is frustrating to see sites appear in the 7 pack that are not actually companies. Just spammy websites optimized to appear in google rankings.