Last week, in the wake of the Google’s Local Algo update, MozCast was showing precipitous decline in their tool that measures visibility of the pack. With the access to the actual queries (thanks to Moz for that transparency), Linda (and to a lesser extent I) noticed anamolies, with totally unpredictable results based on previous searching techniques.

The other reality is that the search results appear to have been changing on a regular basis over the past 72 hours and appear to have not yet “settled” in.  See today’s chart captured below.

What Moz was tracking did decline precipitously. It appears however that the way that Moz was tracking, using the “near” parameter, has been severely affected by this update.  Bottom line seems to be that while there was a drop in 7-Pack displays in the SERPS, the MozCast is probably overstating what the “average user” (which as Cyrus points out below is a mythical baseline) is seeing. I am embedding below the best discussion of this from G+ started by Enrico Altavilla and highlighting what appear to be the best comments about what is known so far:

+Moz thanks to +Enrico Altavilla and +Mike Blumenthal report the crawling issue was probably identified.

When crawling Google without using a real Local IP address but only the modified URL with the near tag included, for Chicago for example, google SERPs are delivering Organics results for Chicago but the maps pack for the IP location used for crawling – in the next example I have run the search query with an IP from Philadelphia using your custom URL for Chicago.

Organic & Ads results for Chicago ( used in the near tag ), but maps for Philadelphia, because of the IP location.

Not sure where the IP addresses you are using for crawling Google are located, but we now for sure for that for that location the maps pack got a huge drop.

I am very happy to have people validate #MozCast data – this is a real-time system designed to detect changes on the fly, and that can be tricky. If a change is big enough, the system may not be flexible enough to adapt.

In this case, the situation is complicated. Here’s what I know so far:

(1) This is not a system glitch, in the usual sense. MozCast is collecting data normally, and the numbers accurately measure what the system is seeing (more on that in a moment).

(2) The drop coincides almost exactly with the “Pigeon” roll-out, so we know something is happening. People have verified pack drops, although other have verified packs on queries that previously had no packs. All of this information is anecdotal, so it’s hard to sum it up.

(3) I have been able to manually verify some of the pack drops. However, I have also seen queries where I’m still seeing packs, even though MozCast indicates a drop. In other words, the system doesn’t seem to be either completely wrong or completely right.

(4) I have manually verified that our geo-location methods do not seem to be working they way they did previously. In other words, the system isn’t “seeing” what we expect it to see. This change seems to have happened with the Pigeon update. So, I suspect that Google has made some changes to how they handle and support geo-location (which their public comments suggest as well).

As of today (and, unfortunately, this change happened close to a busy weekend), my best guess is that (a) something did happen, but (b) the change is being exaggerated by MozCast. The question is – how much is it being exaggerated? I don’t have that answer yet.

Anecdotal reports were highlighting changes but not as severe as MozCast was reporting.

Note that the MozChart is continuing to show changes: 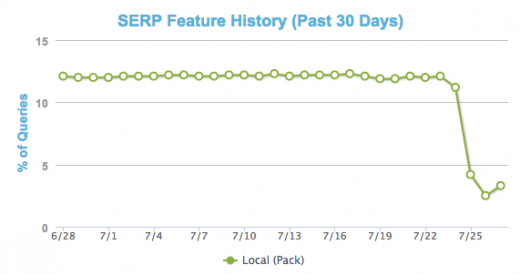 Thanks for sharing that and confirms some of what I’m seeing.

Other changes to the way Google processes data that I’ve noticed include:

1) The Google pack ranking order no longer matches Google Maps results like they used to. (Used to most of the time, not exactly.) They are radically different now, so this is going to affect lots of the rank tracking programs because they use maps to detect placements beyond the 7 pack.

2) The algo for KW queries without geo modifiers seems to have changed too but I never tracked that one much. (Should though since tons more consumers search for KW only.)

3) There are more duplicates in the pack. In the past Google would not list 2 companies twice in the pack. (Or a practice and a Dr at same location.)

4) Don’t even know what to call this one except just wrong on multiple levels : “San Jose Plumbing” https://www.google.com/search?q=san+jose+plumbing.

In addition to the more obvious problems in that pack, and the fact that 2 out of 3 are not in San Jose but are same companies with different PO boxes I think (yet another problem) … that A listing looks borked to me. United States and NO city. (Not service area mistakenly set up, checked that.)

5) But that leads to my next one. In the past for competitive terms a pack would normally show listings IN the city in the query. Now many searches yield a pack with 4 – 5 different nearby cities in it.

In the pack above 2 out of 3 plumbers aren’t even in the query city. But they do have query in name, so maybe it’s doing more of a brand search, in that particular case.

6) For “San Jose plumber” (not plumbing), The A spot goes to a listing not even in San Jose. It’s in Los Gatos, but it’s one of those same listings where name and site =s San Jose Plumbing. (Site not even well optimized and G+ L page bare.)

In addition to the A spot being in a different city than query, location =s PO Box. So much for good quality, local, nearby listings.

I’m sure there are positive things about this update and I hope more honest businesses are moving up and spam is moving out. So above are just a few random observations.

Nick – everybody is affected to a greater or lesser extent.