Google announced this afternoon that they will be shutting down their Places Dashboard self-serve Offers product.

The product was updated with performance based pricing in the fall of last year and given a new interface in 2012 but like the coupon product upon which it was based, has toiled in obscurity.

The product and the output was actually quite nice. There were two problems with it. Google buried the resultant coupons, never showing them in the mains search results and never promoting the program. The product was renamed Offers in Novemer of 2010. At the time I noted:

Google Coupons had been the Rodney Dangerfield of Google local products, always hidden, never talked about and for years, after anoptimistic start in 2006, they languished. 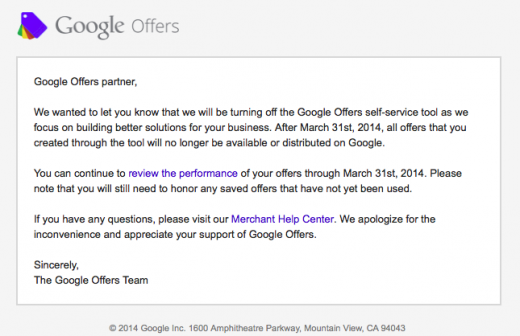 Google owns some incredible couponing technology that they purchased in late 2012. Technologies that offer incredible end to end tracking and simple creation that many SMBs would find incredibly valuable.

It is a shame that Google has not yet succeeded in the space. One can only hope that the phoenix will once again rise with new life in some future product.

Mike: You ran an offer. Did it get activity? Did it get the projected number of downloads? Did you track with the merchant to see if it was used for sales?

Did you get a feel for how well it worked, if at all?

@Dave
Surprisingly, it did. Barbara Oliver has an offer for a discount on appraisals. It was downloaded 6 times in the past 30 days.

She has told me that coupons have been redeemed but I can’t get hard numbers from her.

What is the percentage of downloads versus other traffic metrics? ie downloads to visits or something like that.

I looked at it once for one smb engaging in a discount program. As I recall it required a 1 month requirement. That was a time frame that didn’t meet the smb’s situation. We went elsewhere. I didn’t check price or other elements.

Did it only download into a maps view or elsewhere?

Sorry for my ignorance on the application. I believe the time restriction didn’t work for the smb so I passed on it.

Coupons seems such a natural partner to map / local search for restaurants & the like. Seems odd they never really pushed it.

Maybe something bigger and better is coming soon to new maps folks.

The one time I looked at the google offers situation was during a period when one of our smb’s was considering a major coupon/disount offer scenario in order to boost number of sales.

As per above we looked at the google offer scenario and as I recall it was too limiting in view of what we were looking for. Also we wanted something bigger.

And so we went with a different strategy. I just went back and looked at results.

We chose to do something with big visibility. The business sells a service, a single product. It is highly reliant on search…which means highly reliant on google. Regardless of that we push in every other direction all the time, trying to expand visibility where ever it might work.

During the period we ran this discount in a highly visible way we increased volume of sales by over 70% from the previous year/same time period. Because we discounted we increased sales revenues by a big (though I’m not going to describe it) amount…somewhat less than 70% but very very substantial.

We didn’t use groupon, livingsocial or any of those other deals…so we didn’t have to make a big payoff to some other entity.

Our total traffic to the web site was off about 5% from the previous year. For this smb we have very wide coverage using adwords. Our impressions analysis suggests overall relevant searches via google was down for the a wide variety of relevant phrases. Our google traffic was down. It appears a lot of other sources were up….but lets face it….google is the big traffic generator.

We NEVER would have gotten that kind of response with a Google ONLY Discount program operated through LOCAL and only downloading the discount in Maps….if anywhere else.

The point is simply that the google discount/coupon/offer program offered in the dashboard, which is a basically worthless piece of information in my estimation was a pretty limited opportunity for this one smb. It wouldn’t have done the trick.

Now here is another tangential point…relative to an smb’s visibility and awareness:

I’ve sent you a screenshot wherein google is at times offering a highly visible set of sales off of its shopping index when doing some local searches for some local smbs.

OH CRAPOLA. Google’s search results themselves set up a conflicting compelling offer that directly competes with the local smb’s themselves showing in google maps and in the PAC. That isn’t good for smbs.

The shopping index deals sat above the MAP associated with the PAC.

Good for google….not good for the local smb’s.

Now if google provided an “offer” in the little viewed dashboard…and the offer provided for discount coupons/offers being downloaded if and only if a searcher goes to a separate MAPS view….lets face it….that is not a lot of traffic relative to the number of people looking at the results on the first page.

And frankly if you take the number of downloads for that one little smb you referenced….and that is how google makes some money off the service…say $0.19 or $0.25 per download into maps for a whole month…that $1.20 to $1.50 for the month to google is bubkiss for a business now generating over $60 billion/revenues per year.

I suppose its nice to know about this…from a perspective of google itself…but is this the kind of thing that really helps local smb’s?????

I somewhat doubt it.

Google is primarily run by engineers with zero knowledge of customer facing. This product was lead by an engineer. They launched with a physical inside and outside sales team and actually had traction then quickly let them them go once their “Self Serve” technology was ready. Like G+ no is going to go there, figure out how it works and actually craft their own deal. Google was set to fail at this from the get go, they do not believe in large sales forces. I’d argue anyone selling anything for Google is more of an account manager. They only launced this to save face in the failed Groupon purchase. The said part of all this is that 100+ people left their direct employment jobs to join the offers team as a contractor with the promise of onboarding direct to google 9 month later…….less than 20 actually go this option. #dontbeevil