Oh Where is Washington, NC? How to Fix a Google Map Error 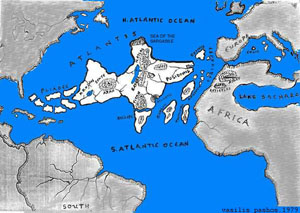 Egregious mapping errors occur a lot less these days on Google Maps. While roads are still being lost or misnamed in New Jersey, we have seen no lost towns and misplaced communities like we saw in 2009 and 2010. And truth be told the problem with roads in New Jersey may be just a reflection of some larger ground truth.

But when serious mapping errors do occur they are still painful and negatively impact the businesses involved.  I recently received this email from a forlorn innkeeper, Beckie Sipprell in Washington, NC:

Lisa Kolb at Acorn suggested tha tyou might be interested in a dilemma that we have in Washington NC. The town of Washington NC, not the County. That is the issue. When someone puts in Washington NC Bed and Breakfast or restaurants what shows on Google Maps are places in Washington County NC…and no one seems to know how to undo this.

If you have any magic in this department please pass it on to us. I am at a loss. Thank you for any help you might give.

I asked Dan Austin for a MapMaker perspective on the problem and whether anything could be done.

Here is his response (once again chock full of useful tidbits if you run into this issue).

What Google Maps should do is offer you a choice between the county and the city, or just ignore the county altogether.  That is not ‘normal’ Maps behavior to pull up counties unless it’s a specific search for the county.

I can’t resolve it directly using MM, but the easiest way to handle it (without going through Maps Report a problem, which has not been trustworthy in my experience) is to go on to MM and use Edit/Report this to explain the issue (attach message below in the Comments field).  I would add it to each boundary (see below).
The other is contact Places Support and ask them to escalate it to the appropriate team.
They might want to try both to see which method resolves quicker.
Google can resolve it using either Atlas/Ground Truth or dispatch an engineer to mess with the code.
Town:
Washington (shortlink:  http://goo.gl/mhlwG5)
County:
Washington County (shortlink:  http://goo.gl/cRx5Wt)
Message I would use:
Searches for POIs in the city of Washington, NC (http://goo.gl/mhlwG5) are resolving incorrectly for the county of Washington NC (http://goo.gl/cRx5Wt) instead of the city.  Example POI search:  http://goo.gl/LPZSPP  Also, the city is not locatable using a direct search in MM:  http://goo.gl/ELznKm Please correct or escalate to the appropriate support team so the city rather than the county is selected for future map searches using the search term Washington, NC.  Searches for the county should only be used if the specific search term Washington County, NC is selected (or at least give the option to select between the two boundaries in the sidebar).  There may be a data quality issue, since one of the county names is Washington and isn’t correctly categorized as Obscure, and Maps is incorrectly parsing the two entities and choosing the ‘bigger’ incorrect one.  A bot added the additional shortened name for all counties in the US:  http://goo.gl/qkGj0S so it may be a nationwide, bad data issue.
You’ll get a response back within a few days from MM telling you that they can’t fix it, and that they’ve escalated to the appropriate team.  It may take a while to fix it.
It was tough to find the city.  I had to use the Browse mode (city/town/village category) as it didn’t come up in the general search (it resolved to the county instead).  Edit, made no change to the city, saved as Draft, and then pulled it from my sidebar under My Activities, Everything.  (Future reference/MM kung fu technique.)

While Dan provides the best method for HIM as an experienced MapMaker, I’d advise anyone with this type of problem to go to the MapMaker product forum and explain in there. It’s a much better place to report issues and get resolutions from other veterans in the MapMaker world. If they can’t solve it themselves, they’ll be able to escalate it right away to a higher up.

Mark
Thanks for the clarification for “the rest of us”.

They’ll tell you to use either the methodology that I outlined or Maps Report a problem. The MM Product Forum is primarily geared toward DIY product solutions and FAQ. Rather than doing the work for you, they expect you to take the initiative yourself, using the existing toolset. MMers in general are rule, protocol, and process oriented, and prefer that you follow those procedures in order to accomplish a specific action. Unless this is a critical issue (i.e. freeway bridge collapsed disrupting traffic, or the front page of the NYTs), it’s unlikely that even Googlers will be able to escalate this issue, as there’s a protocol for handling these kind of issues (of which there are many hundreds, if not thousands). More than almost any other Google forum, RERs and Guides almost exclusively handle feedback, and even they have limits to their ability to push issues like this up the chain to actual Googlers (who in turn, have to push it out to the appropriate teams). At best, this is going to be viewed as a nuisance for all involved. At worst, it will languish unresolved.

I can say this with some experience. There’s a city in Canada that is redirecting to the wrong location (Langford, BC: https://www.google.com/#q=langford%2C+BC&safe=off, which is not in Langford, MB) and I tried using multiple channels (MM, Maps, and the Onebox Feedback) to raise the issue in order to find the best fix, which still hasn’t happened yet. That was months ago. What may work for me, may not work for you; nonetheless, unless you know an engineer on the appropriate team that can fix it right now, it’s more than likely MM will tell you that they’ve sent it on, unless they can immediately fix it with their toolset. I also recommended using Places Support, primarily because Places is becoming critical to Maps, and they may be able to push issues like this up the chain further because it’s impacting claimed businesses.

If you’re interested in working with MM, and have questions that aren’t covered by the Help guides, or want to voice concerns that you can’t address using the toolset, then by all means, use the MM forums.

Who knew!?? This is a sobering reality for sure. Thanks for sharing this how-to. I also noticed the link in paragraph 2 to poor Beckie Sipprell is broken. The folks in Washington, NC just can’t catch a break. 🙂 Thanks again.