Google Maps: What Happens When You Lose a Town?

Wikipedia seems to know, Mapquest knows, Bing knows, even Google Organic seems to know something that is a secret to Google Maps & Google Universal results – the whereabouts of Rogers, MN.

Well its not exactly true that Google Maps doesn’t know where Rogers is. It is apparently more complex than that. But real life often is. The result though is the same. 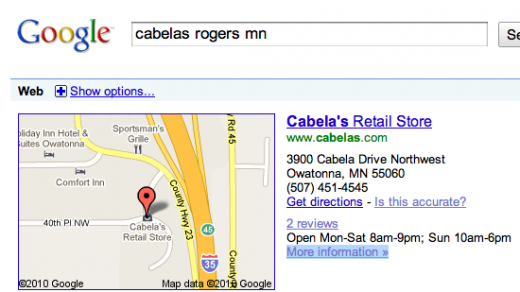 It appears that Rogers, MN might actually be two places. One , an up and coming fast growth community that is 40 miles or so Northwest of St. Paul and one, that seems little more than a road sign, that is 70 miles southwest of St. Paul. If you look carefully (ie by zip code) you can find the principle Rogers to the NW of St. Paul. I have ground checked the Rogers, MN 55374 and found that it really does exist. I am not all that confident on the other. I couldn’t find anything or anybody there to call. 🙂

The problem is that when searching in Google, the apparent ambiguity is not recognized and, for whatever reason, the not so significant Rogers, MN gains precedence and nothing shows from the “real” Rogers. Thus no place in the Rogers, MN 55374 can be found. Not the baker, the butcher, not the candlestick maker and certainly not the doctor.

I attempted to explain this whole mess via the report a problem link but somehow the choices just didn’t seem up to handling the problem. I did, in the end, manage to file a report after being booted out of the system once.

But is that really enough? Will it really be fixed in the promised 30 days?

I am hoping that Google takes pity on the poor town of Rogers, MN zip 55374 and finds them a place in the Maps world sooner.

PS Before I finished the article I did get an automated response from Google on Problem ID 94CB-A209-B92C-FD74…..

that they will send me an update once the case has been reviewed.

Here is the screen shot from Mapquest which handled the ambiguity properly: 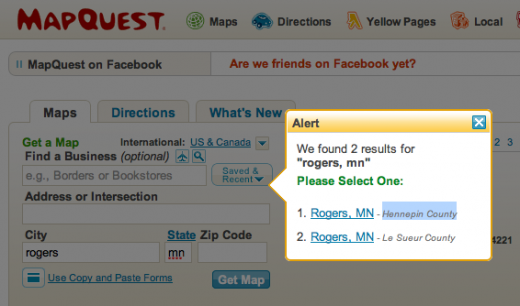 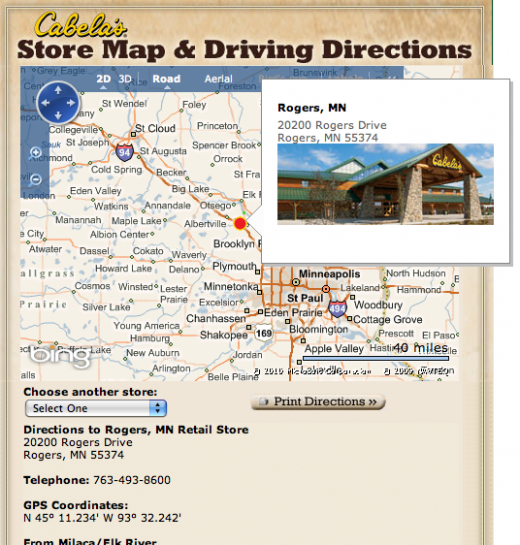 How weird is this? I think they did notice, and from this end it looks fixed. I literally read this post 15 minutes ago and found nothing in Rogers, just like you.

2 minutes ago I did a search again, and Google Maps notices both Cabelas and the Target in that town. Are you seeing results now? Just curious and kudos from this Minnesotan for noticing and reporting it!

I am still not seeing the “fix” but for the sake of Rogers, I hope you are right!

The person in Minnesota only noticed that they were not coming up in the search. It took some sleuthing to understand why…Google can’t find your business if they don’t know about your town or as in this case, they lost it. 🙂

Shoot. Wish I would have taken a screenshot. Now anything Rogers related is gone again. Well, for a couple brief minutes it was up. Hopefully that’s a good sign for the near future. 🙂

LOL! A friend from MI sent me a link to this blog.

I live 6 miles from Rogers, MN and I would be really ticked if
I was doing Google Local listing set ups for businesses in the area.

I assure you it is not a bump in the road, every kind
of shopping you can think of is there, even a Target store.

We deal with this type of problem frequently as well. We load in the standardized government set of data for cities and zip codes just as any other service like Google does. The key difference is timing and correcting government mistakes (I know). In the case of Rogers, MN, there are 4 entries for what amounts to a one-zip-code-city:

The kicker is that the N (Not acceptable), A (Alternate), or P (Primary) are not always right, and sometimes change. So depending on when the data is loaded and whether or not it’s been manually changed in the past, dictates whether or not you run into these oddities.

Where the real trouble comes in, which seems to happen more in Texas, is where one person says “Otsego” is the real Primary city name, and then the data gets manually updated with what may be incorrect data.

I just like that they can fix it that quick.

Interesting. I have come across examples where the marker is off just enough to confuse people and there doesn’t seem to be any way of telling Google that it is wrong (unless I am dealing with a business listing over which I have some control). I didn’t realize that Google Maps was missing whole locations. Come on Google – let us help you put things on the map!

I don’t like using Google Maps for directions because my house/address isn’t there. I’m glad to know it’s not just isolating where I live, although the Rogers issues seems to have been fixed.

From this part of the country I am still not seeing the fix. Others though have reported to seeing a fix. Hopefully soon.

Google offers up a “Report a Problem” link on every level of Maps and about every entity and place. It is usually in the lower right corner of the screen although it might be at the bottom of a list or in an info bubble…but Google is getting (they have said) over 10,000 corrections an hour from around the world. I just thought, from a public safety perspective and potential loss, that a whole town gone missing deserved special highlighting. 🙂

@Blase
It didn’t seem a bump in the road to me either…you not only have a Target (which the town I live in doesn’t have) but a Cabellas as well…it would be a pain for any business or service in the community not just the ones that know about Maps. I can imagine that Cabellas heard complaints. 🙂

It is a huge problem, Google gathering data from Streetview cars, governement data, parcel data and user content does a pretty good job when they good data sets.

I have heard that there is a “distance decay” function in map data…the less population & the furhter away from urban areas the worse the data. If Google doesn’t have good streetview data and there is little user generated content, as you have pointed out the government data is suspect then the outcome will not be that great.

[…] Google Maps: What Happens When You Loose a Town?, Mike Blumenthal […]

I have this picture in mind of star trek trying to “beam someone up” and somehow the molecules get screwed up, misplaced…and Scotty never gets back to the ship. I believe in subsequent versions of Star Trek they fixed that glitch.

Mike- I love that you are tackling issues in my back yard. I’ll get you a list of others. 🙂

We run into a few different issues in MN with Google maps. We use their API for a few community websites and see issues with addresses on State Highway 25 and a few county roads from them. Instead of the business appearing in Buffalo, MN (my hometown), they appear in Rochester, even though we are providing the city/zip. Only about 130 miles apart. 🙂

You’ll notice a few examples on this page:
http://www.wrightspot.com/business/accountants-cpa-tax

Google is becoming a utility in people’s lives. As such and as the dominant source of this type of information they will have to live up the responsibility that they have stepped into.

UGC works for not critical issues but when people are put at risk, they need to step up to the plate!

I am still not seeing it.

@ Mike You are correct. Google local and Bing maps will make you go mad. UGH

Bing and Mapquest use NAVTEQ maps.

I think part of the problem lies in the fact that maybe there is not enough business listings in Rodgers, MN for google to pick it up. Possibly the creation of more listings will help google recognize that this a town

Good theory but…my research indicates that is a geolocation problem. Since Google is confused as to where Rogers MN is, it can’t locate the businesses that claim to be there. You can verify this by searching on Rogers, MN and Google shows a site that is 70 miles sw of the Twin Cities…

Google creates the base layer of Maps by combining streetview data, government data & parcel data. towns and cities are part of the base layer. Business are essentially laid over this layer as are MyMap objects, real estate etc etc.

My experience with Google Maps is good.

[…] There is another blog posting that was in the email I received and it seems that they are trying to follow this and let it be known: https://blumenthals.com/blog/2010/03/17/google-maps-what-happens-when-you-loose-a-town/ […]

Citizens of Rogers Demand that Google Be Renamed After Lost Town | Understanding Google Maps & Local Search
April 2, 2010 at 10:13 am

[…] Mn, lost since March 17, seems to have been joined by several other “lost” communities including Wickliffe, OH […]

The last piece of Mike Dobson on the complexity of disambiguating places on maps is hard stuff.Save your time and don’t read it if you still want to understand maps as just shiny tiles quickly sent to your screen.  Otherwise – make sure to also r…

[…] Comments United Maps on Google Maps: What Happens When You Lose a Town?LP (2 comments) on Will the Real Google LBC Ad Please Stand Up!Mike Blumenthal (749 comments) on […]

I’ve noticed this in the UK aswell, where towns do not appear on google maps unless a postcode for a particular street in that town is entered.

Google maps is an excellent tool, and easy to use, i’d hate to have to be the person to quality check every village/town/city!

Too funny…but it goes to show that online resources are not nearly as reliable as print. Maybe we need to have factchecker 2.0 be the hottest new job!

[…] in other areas around the United States have also been affected.  Mike Blumenthal notes missing cities on his blog. When Rogers, Minn., went missing, Blumenthal set a clock on his blog, timing how quickly Google […]

That is pretyy funny, but its not uncommon as it seems.