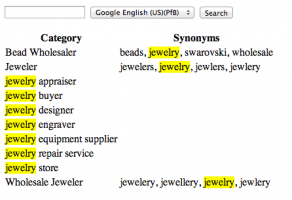 The new list is designated as Google English (US) (PfB) to distinguish it from the list for the old and still predominant dashboard. Note that the new categories themselves DO NOT have synonyms in the new dashboard but where there was a 1 to 1 match with the old category we have added them from the existing list to facilitate searching.

We have also made the country selection default to the previous country choice selected to make additional searches easier.

There were 88 additional, non restaurant categories added to the new Google Places for Business list: in-new-not-in-old-others1.

Given the clean up in some categories, it was odd to still see newly added categories that do not comply with the Category guidelines like beauty, car rental. culture, hair care, laundry and logistics showing up in the new list.

Regardless, the restaurant list is intriguing. Either Google is attempting to create a master list of restaurants for world wide use (as opposed to just the US) or they have broader plans for the list in existing or new restaurant related products.

Hopefully the tool will continue to be useful to you. Please visit the newly updated Google Places for Business Category Tool and let me know what works and what doesn’t in the tool and how you are using it.

Still curious if and when Google will update the “Categories” section of the good ol’ Guidelines to reflect the need to choose categories from their list (it still implies that custom categories are available). I suppose they may be waiting for the new dashboard rollout to be complete.

I’ve used the GCT for a long time now, and it’s been a lifesaver. Thanks, Mike.

Mike, I second what Phil says. I don’t use a ton of local tools, but this is one of the few a turn to repeatedly. I really appreciate it, and appreciate the update.

Thanks so much for this – I never knew this tool even existed! Super useful, thanks Mike!

@Phil & Miriam
Thanks. Now that I have a new programmer on staff that is less busy, I will be able to pay more attention to keeping the list updated.

Thanks for updating the tool so quickly Mike 🙂
Perhaps they got all of the different type of restaurants from their Zagat database?

Thanks Mike, this tool is a huge help