Correction 8:50 am: Google “inadvertently included the wrong screenshot on the press site – the image of the dashboard featuring the option to add a map and download KML. We’re always testing features internally and may or may not release them; we didn’t intend to indicate that we were launching these features”.

Google announced earlier today, the rebranding of the Local Business Center as Google Places. As part of this rebranding Google has: 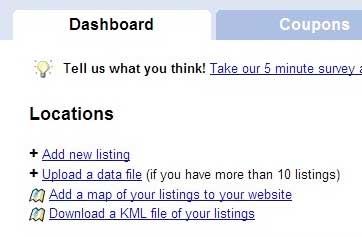 -Expanded availability and rebranded their fixed price enhanced listing feature as “Tags”. It appears to have moved from a test to a permanent foray into a simple fixed priced ($25/mo) SMB product.

-Announced the availability of Business Photo Shoots where “businesses in select cities can now request a free photo shoot of the interior of their business which we’ll use to supplement existing photos of businesses on Place Pages.”

Google also noted that over 2 million businesses in the US (4 million worldwide) have claimed their listings with Google and that 20% of searches on Google are related to location (somewhere close to 2 billion a month) . That amounts to roughly one in every 7 businesses that have claimed their business listing. 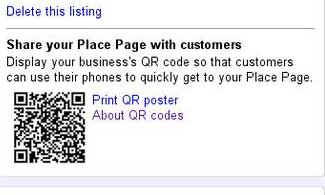 While the announcement may seem to some a simple rebranding or a minor upgrade, it may be more than it appears on the surface.

More business marketing and engagement: By creating a single brand that unifies Places Pages and the claiming process, Google is attempting to make the process more obvious to SMBs. They are also offering an overview webinar and outreach on the business photo shoot participation. Clearly over the past year, Google has been making an attempt to educate and engage SMBs in the claiming process and that seems to be accelerating.

Formalizing one leg of their monetization strategy: If you assume that only 15% of the businesses that have claimed their listing participate in the “Tags” enhanced listing product, it will generate over $180 millions annually in just the US. As part of this rollout Google also re-introduced their Service Area feature that was rolled out earlier in the month. This feature really has to be understood as part and parcel of their monetization strategy rather than part of their relevance or ranking algos.

Rolled out several Google Places (LBC) features: Google is formally embracing , QR codes and . These endorsements are significant in their own right. The broadspread adoption of QR codes could bridge the mobile and business marketing worlds accelerating uptake of both. Over the past few years, Google’s development pattern has been to upgrade their Maps product and then rollout additional features in rapid succession. I believe that this could very well be the case here.

These new changes are great. Local is really becomming more and more important. It is funny though: In US you get QR posters and KML files. Those are not accessible here – but hey, we just got the report dashboard. Remember when you had access to that for the first time?

Interesting post, Mike. Do you have any sense of how widespread these changes are? We now have the QR option in our LBC page but no options yet for enhanced listing, kml, or “add a map”. The other big, unanswered question is what, if any, effect the new service area feature will have on 7 pack listings and enhanced listings. It’s our experience so far that in a competitive niche the service area addition has virtually no effect on 7 pack displays as one moves father out from the actual business location. There’s simply too much competition with an actual business address closer to centroid. This results in much more limited 7 pack impressions. The enhanced listing is much less valuable in this scenario.

The have learned (see above) that the KML and add a Map feature were but test screen shots inadvertently included in the press packet.

The effect of the service area, if any, on the 7 pack is unclear. My thinking is that it will be minimal or perhaps as you point out, decline with distance generally.

I believe that Google introduced the feature as a compliment and precursor to the widespread rollout of Tags and other paid features in Maps. Google would have been leaving too much money on the table if half or more of all the businesses in the US could not participate in the program.

Perhaps when money is involved Google will rank these service area businesses higher. 🙂

Am I the only one who thinks it’s weird that Google can afford to send a photographer to take photos of your business but can’t ramp up a large support team for Places/LBC?

I think the Business Photos feature is just strange — it looks like they’ll actually come into your place of business and take pictures of the spaces, products, etc. And there are a fair number of cities they’re making this available to.

[…] as reported a couple weeks ago by Matt McGee. Today it officially rolls out, again, along with a re-branding of the Local Business Center, now simply called Google […]

[…] Mike has a great post on this rebranding of the Google Local Business Center. […]

i agree with u martha ..

Nice review of the re-brand and features, all of which I can’t wait to trial and test however as with all things Google, here in the UK (well Scotland) we always seems to be behind the curve on new roll outs (as I point out in my Google Places review video)…

It would useful to know planned implementation dates Google intend to to offer these facilities in the UK and Europe instead of them suddenly appearing overnight.

Tags and QR codes are particular features I know most of my clients would be very keen to use.

@Andrew actually google.com/lbc is even shorter and works 🙂

Mike, have you heard anything about performance of the “tags” aka enhanced listings? Any idea if it’s helping businesses stand out and leading to more clicks/calls? The effect seems minimal to me with just a mini flag, but perhaps the new tag with a post may help a listing stand out more. Anyone have any experience with tags so far?

Adding Multiple Business Locations to Google Maps (LBC) | Social Reflections
May 4, 2010 at 11:50 am

Its now 2 and 1/2 weeks since the use of tags was expanded to several cities including Washington, DC. I just finished doing a variety of searches for Washington DC businesses and have yet to see a tag in the 7 pac.

All searches were performed in Google.com. Each business term was preceded by DC . Each search phrase turned up a 7 pac.

I was surprised at not finding a “tag” in any of the 7pacs. The 7 pacs included national chains and well known, well run local businesses/chains. Still no tags.

It appears this hasn’t really caught on or grabbed the attention of businesses or their web/marketing firms.

Frankly, I love the opportunity. At least, at first, it gives the opportunity for a well made marketing piece to be shown with a high degree of visibility, at least IMHO. Regardless, it appears that nobody else is thinking that way, and/or nobody knows about it.

At this rate….I wouldn’t pin aggressive revenue numbers attached to this form of Google advertising. 😉

[…] Google had a newish program regarding Business Photos for Place Pages, (having read about it on Mike Blumenthal's excellent blog) we never applied to participate – and my initial reaction was one of skepticism. Too many […]

[…] reasons, direct advertiser relationships are more economically attractive. Moves have included the transition from the Local Business Center to Google […]