Google Maps: Sponsored Icons – Pay Your Way to the Base Level & Add a Logo 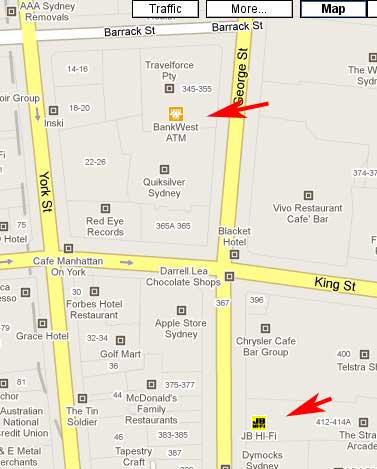 In August last year, Google Maps added icons and labels of prominent businesses and places of interest directly onto Google Maps in the form of a small icon. In the Google Maps discussion groups there has been a number of (angry) questions as to exactly how a business could get their icon embedded in the base layer of Google Maps. Until today, Google’s only answer was that businesses were given an icon based on the secret sauce of Place Rank.

Now it appears, that at least in Australia,that Google has launched a new feature that builds on this feature for a price. It is not clear from the blog entry whether the program is a test or is permanent, nor what the cost is, nor whether it is a one time cost or a monthly recurring cost. The form allows you “to register your interest in Sponsored Map Icons” but gives no indication of process or time to have your icon listed.

Now when you visit Google Maps in Australia, it’ll be easier to find some of those shops and other businesses you visit most often because when you zoom in, some businesses will be identified by a small representation of their logo. These easily recognisable logos more closely depict online what the offline world looks like, so next time you’re trying to find your way on the map you can navigate more easily using these icons as landmarks.

As well as making it easier for you to find the nearest burger joint or ATM at a single glance, this new feature helps local business owners promote their physical location on the map via an easily recognisable logo, and therefore connect with a larger audience. Advertisers will pay to have these sponsored map icons appear on the Map instead of a generic icon, helping to generate awareness of their locations among the millions of people who visit Google Maps every day. If you’re an advertiser that would like to talk to us about having your business appear like this on Google Maps, please add your details to this form.

This test, though interesting, will likely provide little real benefit or exposure. While there has been interest in the icon in the forums, it is not clear to me that many users get to this level of detail in the Map. The pricing had better be quite low as the return would appear small or non-existent and very difficult to track. This apparent lack of obvious accountability is unusual coming from Google.

Google’s obvious intent is to more heavily monetize the business listing side of Maps. One assumes from the tests of the Local Listing Ads last year, the Enhanced Listing test in Houston and San Jose that started in February and now this Sponsored Map Icon “test” that Google will have a concrete, permanent and wide spread advertising model (or models) in place in the very near future.

Update: Chris Silver Smith pointed me to an article of his from 6/07 where he noted a similar development and foresaw the move to monetization.

Wow!! We have had some interaction abt the embedded business name referenceces in google maps. Working to monetize this aspect amongst the many efforts Google is making to monetize “localness” in the 7pacs or elsewhere appears to be an effort to monetize the LEAST visable and least prominant element of the many characteristics of location that Google shows.

They are virtually invisable in their current status. They typically only show when is looking at a very narrowly defined geography. The more you drill down the more such places show.

Once again, Mike, it appears any utility at all for advertisers and any potential windfall for Google would only occur if G Maps and places page become the widely used and default presentation for mobile.

In that case it could have use, especially in urban areas, where one might find the nearest ATM, the nearest pharmacy, food store, restaurant, fast-food, dry cleaner etc….all within blocks of one’s current location.

OTOH, when we discussed this phenomena from a PC perspectative who the heck would care or notice these locations? They are typically mostly seen when one drills down to an absurd level for some non typical reason, such as obsessive compulsive efforts to discover all the mysteries of the cosmos or, if not the cosmos, maybe just all the mysteries of G Maps 😉

Whether it is a test to see how elastic demand is for unproductive advertising or a future mobile move, or perhaps both is unclear. Cerainly every move that Google is making these days is carefully positioned across both the current dominant desktop and the future strong presence of mobile.

I agree that the exposure from this would be miniscule at best….

It would be cool if they could show movies icons in the theater where they play.

Google Maps in Japan has displayed business icons embedded in the map images for quite a few years:

Back when I noticed that, I predicted that they very well might use something similar in the US market eventually.

These types of ads are very similar to icon ads which MapQuest was using years ago.

Ah…I forgot that one…good call. The question I have…what value would it be the business?

My question is what kind of an icon would they use for legalized prostitution in Nevada or the source for that wonderful show…”the best little whoreshouse in Texas”? Mike, could you get a Google Senior VP to comment on this question?

I think the value of this would vary from place to place. If your business was located in a place very near a major landmark, I think the value could be good. People tend to browse in maps around popular areas more, so an icon in such an area would get seen a lot more than an icon in remote locations.

Also, I haven’t seen any mentions yet of how much this treatment costs.

I think the value depends on the type of business, too. I might be interested in clicking on an ad of a restaurant in the immediate area where I’m planning to visit, whereas an ad for an accountant or lawyer would be lost on me. A pertinent question would be “is it the type of business that reasonably could expect ‘drop-in’ traffic in the brick-and-mortar world?” If so, it could benefit from this virtual form of “drop-in” traffic in Google Maps, too.

Earlpearl – clever! Yet, the icons are so small I’d bet that there’s little room for any pic to convey much offensive stuff.

Also, as a Texan, I’ll let you know: the “Chicken Ranch” down in La Grange, which was the inspiration for the Best Little Whorehouse movie, has not been in operation in a great many years. Marvin Zindler, the flamboyant tv journalist portrayed in the film, was successful in getting the place shut down.

According to Google, they are being sold on a CPM basis and specific pricing will vary for each advertiser based on the popularity & prominence of their location.

They also noted that they were initially pitching the idea to big very large brands in AU and NZ only…so no opportunity for Chicken Ranch or other creative logos. 🙂

I’ve seen cases where CPM could be varied in certain sites/networks, based on geographic locations. It’d be neat to see the rate card!

In a city like London where Google maps is widely used to find locations I believe it could be useful.

If Nandos of Mcdonalds chose to place all their locations on the map, I could see significant value.

If I am looking for a location for a meeting and notice that there is a restaurant I like close by, I think that could be useful marketing from a sales POV and certainly awareness

your scenario and client type are very feasible. It would seem note appropriate for some size and type of businesses than others.

I have trouble envisioning it working well in rural environments or with many types of business. The destination business like the sho repair shop would not likely benefit

this is one of the best concepts that google has thought of in a while. Not only will it help there advertising revenue but its a great concept. Especially in a world of mobile maps and smartphones

Why wouldn’t you want to dominate a city area if you had the chance? I am sure that many companies would want to do this for just branding purposes only. Also this map add on would be excellent for people using maps as a GPS.

I do agree though that the actual effect could be minimal. But still, if your competitor is showing off their logo all over town – you would be aching to be there also.

I fear that for the forseeable future that the base level of Maps would be even less visible than Google coupons. And that’s hard to do.

agreed – of course there is a difference in the city size. Hopefully the visibility will stay intact.

A group of us in Google’s offices in London created the Google logo using 884 individually printed 4×6 photographs. The camera took a shot every 7 seconds