One of my clients, Barbara Oliver & Co. Jewelry in Buffalo for whom I do some internet marketing, received a Favorite Places poster and a congratulations letter today. Her initial reaction was muted and somewhat suspicious but once I explained that she was one of only 100,000 in the US and one of probably only 20 or so in Buffalo, she was quite pleased.

The promotion is an interesting one, essentially recognizing early and successful adopters of the LBC in higher traffic, retail industries. I was surprised at the skepticism of the client upon first receiving the poster. I guess that SMB’s have been trained in cynicism by years of dealing with the Yellow Page folks and coping with the current onslaught of on-line offers. In her case, a 7-Pack listing has brought measurable and substantial business.

Here is the letter that she received (click to view larger). 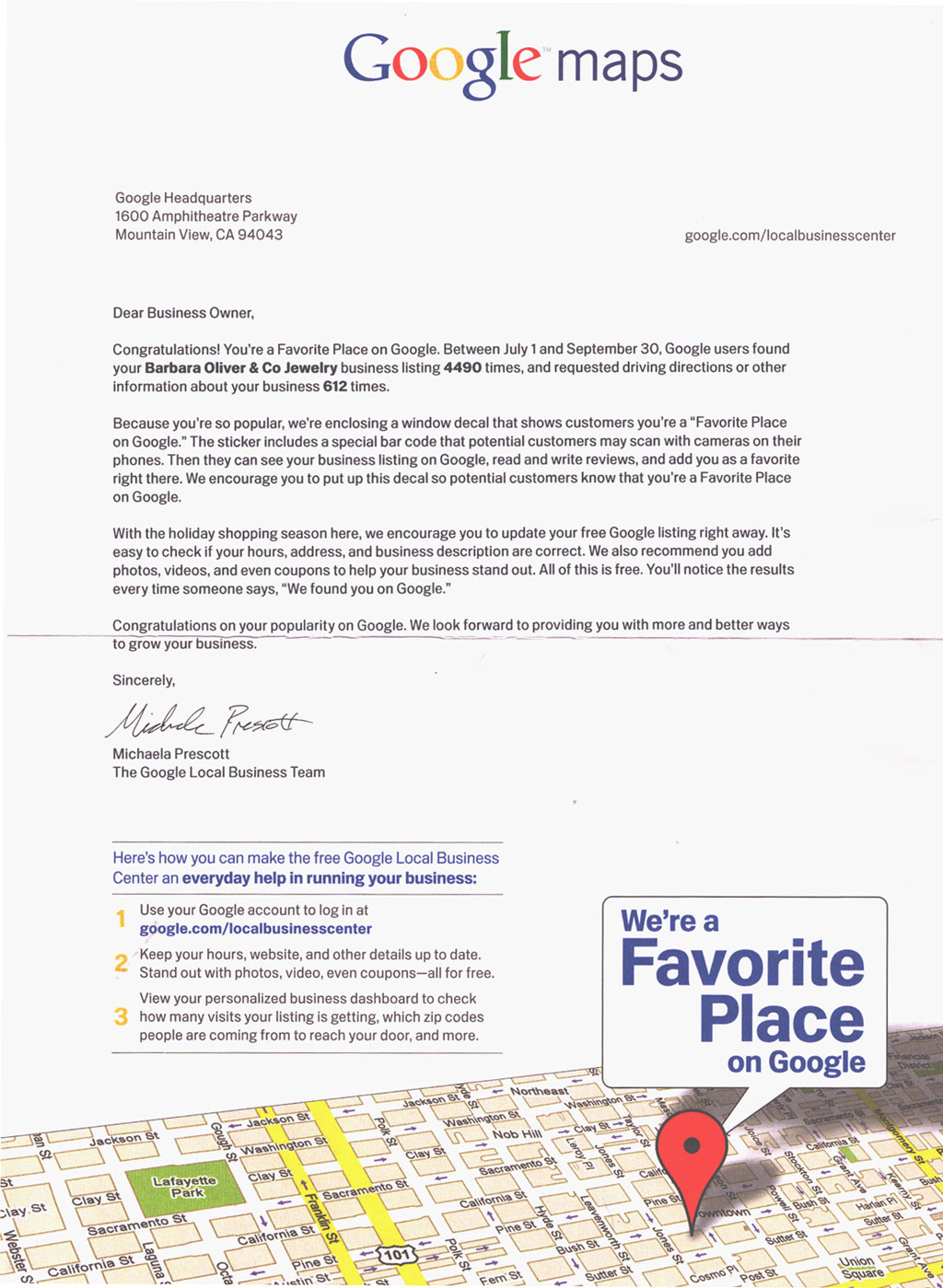 Wow. It seems to me that your past blogging about other Maps stuff and using this jeweler as an example, plus some of the group testing we did when place pages rolled out, kind of skewed Maps traffic stats for this company, and getting her onto that list of 100,000.

I’d be scratching my head too if I was her, but I’d also be giving Mike a big thank you 😉

Actually, I just got my letter today! 😀

I also think that they need to roll out a favorite services award, and maybe that will happen in the future. Usually service based business store fronts aren’t all that great, and nobody visits them anyway.

But, they could give the top services in an area Google bumper stickers with bar codes. Might be a driving distraction trying to take a picture though.

I would like to think that it was the excellent work that I do, that did it. 🙂 but she is/was grateful as it has given her a whole new way to think about her marketing.

We have successfully driven traffic and sales at a fraction of her traditional marketing costs via ppc, organic and local…now if I could just get her to spring for a professional looking site…amazing that when selling diamonds one might be pennywise and pound foolish.

Let us know when your PO Box client(s) achieve that distinction. For the dentist perhaps the Place Pin will be replaced with a custom icon…perhaps a molar. 🙂

Instead of rewriting what I already wrote about Favorite Places, let me know your thoughts opn my quick post http://www.localsearchpilot.com/local-search/google-favorite-places

@ Mike Ramsey – that would be funny if I go to my PO Box and teh one next to me is a Google favorite place! clearly that wont happen. right? 😉

But you have got to agree that they need to cater towards service businesses becoming a favorite and chances are seriously unlikely for many…driving directions are requested, and like Matt Mcgee said, many get the phone call like realtors, or come-to-you massage therapists.

What if these guys/gals want to be a favorite as well. It reminds me getting picked last in dodge ball all growing up because I was the fat kid that happened to be a big and easy target

I will make it happen, and then laugh a very evil laugh…

I alter exist as a black hat locksmith seo ninja. My company is called

Clearly it sucks to be a service business and see all the benefit that is accrued to the street level retailers etc from Maps. It sucks to not be picked for the game…that will change at some point but in the meantime you really just need to pick a different game.

One presumes that Google’s marketing and product dev serves their interests, not necessarily the interests of the local businesses that are on Maps.

Let’s look at the Places promotion from their (hypothetical) point of view:

1)It is an inexpensive way for Google to get expanded exposure of the Local Business Center. If 60,000 of the posters get hung up, for the cost of the promotion, Google gets on line press, mainstream press and posters in windows of high profile retailers, interest of other retailers, techies, customers etc etc far beyond the 60,000…

3)Google gets 60,000 test sites to determine penetration rates of the CR standard and its uses in different markets & industries so they can do future planning. It won’t be a huge sample but it will be big enough to gather accurate data

@Mike
I agree, its a no brainer for Google. It gives the client thats a Favorite Place a new gimmick in the window. I stated in my post (http://www.localsearchpilot.com/local-search/google-favorite-places) that it does nothing but raise awareness and place emphasis on the local business center (for all members of the LBC)

they need some kind of minimum standards for businesses to get on the map. I need to expand upon that in another post.

what do you guys think about this, off topic, but wanted to get a good laugh http://www.localsearchpilot.com/local-search/tlcs-ppc-needs-to-change-their-titles-no

Thanks so much for sharing the letter here, Mike. It’s friendly and well-written.

May I second your vote for website redesign? Driving traffic into a clogged artery or dead end means money wasted.

It is well written. Interesting promotion and way of engaging the business and buying public…kills multiple birds with one stone.

I suggested a more professional design but she didn’t see her way clear to that and she had this new site put up just last week.

I spent over an hour of back and forth with the designer to add some seo details and I still found this today: meta name=’robots’ content=’noindex,nofollow’

Thats pretty cool very few people I have heard of was lucky enough to receive this.

I don’t understand why they don’t put these out to Europe where Google domination is 95% ! I would love to hand some of these out to our clients 😉

Yes there is some appeal to the program because of its somewhat limited nature. But as Jason pointed out in his piece on Places Poster, it will be interesting when Google sends everyone a bar code for their window.

@Martijn
I guess you will just have to wait. 🙂

I have a UPS box and received one of these letters yesterday. So I guess UPS boxes arent an issue. Google is strictly looking at search numbers.

@David
That’s intersting. Did you hang it up? 🙂

You have got to get a picture up of it on your box. Or put it on your vehicle….just not in the back seat!

I work out of my house so I’m not sure where I would hang it. I guess I could hang it by my UPS…though I’m sure that sucker would get stolen pretty quick.

I will for grins get a photo of it on my box just for you guys. 🙂

[…] decals, including some small business owners receiving them despite using a post office box or UPS mailbox as their address (which goes against Google’s business listing guidelines). A Google […]

I have a web design and SEO company and I received one of the favorite places stickers. We do have an office but we have never had a single walk in customer. So I put an image of the sticker on my website. I am not sure if the bar code will be scanable, but it least shows that we recieved the honor.

Could you or have you addressed issues relating to “related maps” it seems that some of my customers and other people I taal to tag listings in their “my maps” and they show up as “related maps” while others do not. Is this just google being slow or is their some selection process.
I haven’t been able to make sense of it yet.

[…] has invested significant marketing resources into the Red pin with a bevy of marketing campaigns. As a result, […]