Google Maps Data Quality: Where do we stand after the Locksmith Onslaught?

I have written extensively about the hijinks in the Locksmith industry and the impact that the massive amount of mapspam was having on the Maps Index quality. Google noted that they had fixed the vector in January and another in March. Google however, when they fix a technical iisue like Mapspam rarely if ever seems to go back and clean up the resultant pollution in the index. It really begs the question: What does fixed mean?

One of the many tactics that the Locksmith industry used was to hijack unclaimed records in other industries (like hotels & restaurants) that had large numbers of web citations and reviews to achieve ranking cred for themselves. Over the past 6 weeks I have received various reports of these listings still showing up in the Local 10 Packs and spotting some myself as aI meandered through Maps.

David Mihm, Local SEO in Portland, sent me an example of a hijacked restaurant listing showing up for the search Restaurant Portland. We quickly (less than 10 minutes each) found 10 additional high profile searches that still are showing the affect of being hijacked by locksmiths. Literally one of every two searches in major metro areas showed polluted results. One can only presume what a thorough review might find. A motivated locksmith discovered that in the Maps records of locksmiths for the top 50 metro areas in California, he found 60,000 spammy locksmith listings. 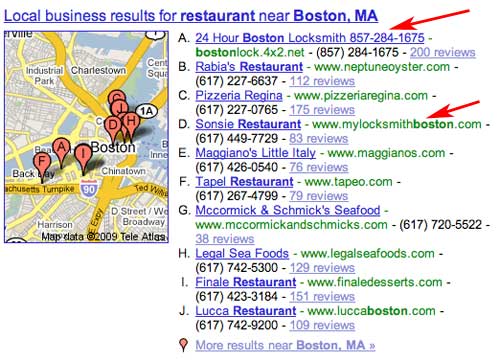 Here are the searches that included obviously hijacked listings:

Local data is hard enough to get accurate when all the players are honest and focused on that goal. However, leaving this detritus in the index takes the quality to a new low. As I noted in a previous post, when the plumbing breaks you don’t just seal the leak in the pipe you clean up the mess from the broken sewage pipe.

It is time for Google to give the records back to the rightful owners and provide the quality user experience that they so often reference as their standard.

Yep: It appears that the aftermath of hijackings has left a number of inappropriate redirects into the locksmiths. Quite messy.

I took a couple of those same search terms and ran them in organic Yahoo and then Yahoo local. I didn’t find any locksmith listings in the 3 searches for combos of city name and restaurant.

Its a take off on the article you wrote about reviews….wherein Google seems to have a black hole with regard to problems and responses and yahoo has a simple customer service option with regard to reviews.

It could well be that the spammy locksmiths didn’t try and spam Yahoo local. If they didn’t, that makes it sort of like viruses on the web. The spammaster producers of viruses don’t spend time targeting Apple but focus on PC’s due to market share. The same thing could be occurring in Yahoo Local.

Meanwhile, yes ….take a look at those 10pac maps listings…..and in some cases…you’ll be directed into a locksmith website.

Frankly, beside leaving the 10pacs littered with bad listings; I personally find metallic keys and locks both unappetizing and terrible with regard to nutricious tasty meals…and even rougher on my teeth.

Things should be done retroactively as well!!

Maybe that’s just me but I can’t understand why Google is still letting most of its Maps listings to be Editable; Those are business’s listings, if they are online & have some incorrect info- the businesses owners MUST be the only legit ones that are allowed to edit them- otherwise… ( well, I don’t need to explain you what ‘can’ happen).

if the option of reedit/ hijack listings’s details will be closed, the option to hijack a claimed listings will be (again) more attractive to do.

If the last one will be closed- there are couple of more techniques to use in order to make yourself a nice “Super-Listing”!! (Mike, maybe I’ll publish it & unleash the monster? does Google will take us more seriously then?)

Other directories are been hurt by the scammers as well-

Yahoo Local – search for “Locksmith in Los Angeles”- Review spam is the issue over there but enhanced listings are untouchable.

MSN Live Search Maps- hasn’t been spammed. The reasons are: 1. It’s less attractive due to low activity. 2. As far as I know- listings can be online only if they were approved by a postcard (Hmmmm what a strange, ‘creative’ solution to stop the scammers.)

Regarding the review spam in Gmaps- starting 1 week ago, any Gmail that was opened in the U.S.A must be approved by SMS. So I guess Google is well aware of that issue..

Be careful of those crunchy locks, Dave. In San Diego, we’ve got them invading a mixed tapas Spanish restaurant and a pizza place. Deep dish, please, and I’d like extra keys on that.

Mike, I’m going to link to this post. It demands an answer to the question of why Google has left their own local index polluted with spam, regardless of whatever measures they may be putting in place to prevent future spam. I’m going to go write about this now.

[…] aging and, I’m sorry to say, neglect. As Mike Blumenthal’s most recent article on the gunk and debris in Google Maps illuminates, it is to be feared that our Google has become that distasteful thing Mother warned you […]

Though I think it is essential for Google to clean up the mess, I tend to wonder how easy that is to do now that they let it become such a problem.

I also, don’t know about others here, but I certainly saw cases of hijackings that occurred after their claims that they had stopped it. Again, I don’t think it’s that easy for them to do.

Remember how they claimed to have come up with an algorithm for the Google Bomb problem back when Bush was miserable failure, but as soon as Obama was in office he was Google bombed. Apparently their algorithm to deal with the problem wasn’t that sophisticated.

I sometimes think Google is a lot like the Wizard in The Wizard of Oz and they don’t want anyone looking behind the curtain because what they claim to be capable of and what they are capable of are two very different things.

HAL, I mean Maps, has gotten very complicated. I wonder, like you why a simple business record is so hard to keep straight. A business record as normally defined is a finite editable thing but apparently not in Google’s world.

[…] Blumenthal has written extensively about how locksmith spam has taken over Google Maps.  If they gave out Pulitzers for search bloggers, Mike would surely be […]

[…] Blumenthal has plenty of posts about it and has been a pretty loud voice for some serious quality control in Google Maps. Those posts, as […]

I don’t think I’ve seen this kind of spamming. I didn’t even know you could do it. I would think that Google wouldn’t have any trouble stopping this. I’m sure its been fixed by now.

Google still is having problems

Is this still a problem now?

@Aaron
Yes it is still a problem

[…] Google Maps Data Quality: Where do we stand after the Locksmith Onslaught?, Mike Blumenthal […]

Is there any advice you could give to get my business in the Google Maps. I am a mobile locksmith operating from an address outside of the suburb I want to target, can I still get a listing?
I dont have a physical street address, would that work against me? I have noticed other businesses with addresses different from the suburb in which they appear in the maps
My site is http://www.locksmith-bondi.com.au
thanks