The Plaza Hotel is Mapjacked

Update I am happy to note that The Plaza has been returned to its rightful glory as of this evening (3/16/09). Unfortunately the spammers domain 24x7locallocksmith.com still has 229 entries in the index across the US.

The Plaza Hotel in NYC has been an important, even iconic, location for events real and imagined in American life. It occupies a a storied place in the American narrative. Truman Capote hosted his acclaimed “Black & White Ball” in the Grand Ballroom in 1966. It has served as a backdrop for over 15 movies and TV shows including North by Northwest, the Sopranos, Home Alone and Crocodile Dundee.

It once again is playing a leading role in America’s newest drama…its business listing has been mapjacked by Locksmith’s, in the ongoing saqa of mapspam in Google Maps. When you search on The Plaza, NY NY this is what you see: 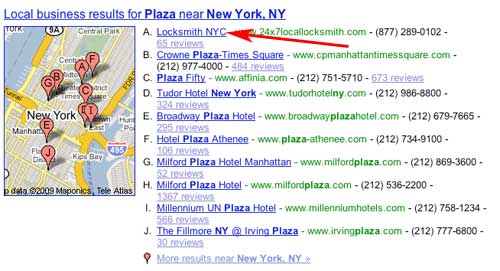 The hijacking of the Google Maps listing of the Plaza Listing was done by Locksmiths to achieve a high ranking on the phrase Locksmith NYC: 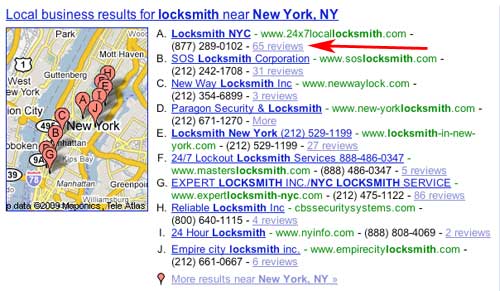 When you click through to the reviews via either listing this is what is presented: 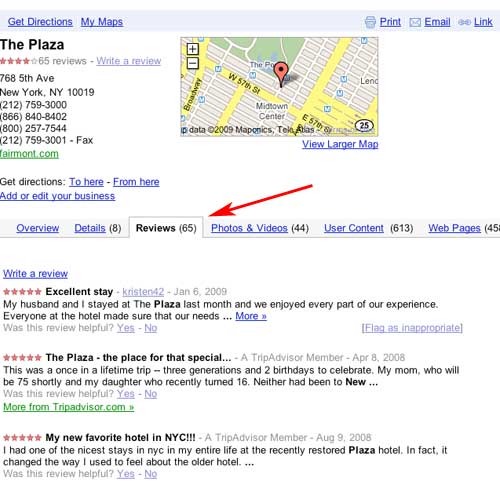 This domain, was the same as the one that was associated with my previous post on cross industry mapjackiings. It has 229 Business listings associated with it in Maps, all of which appear spammy.

David of Dew Point Productions asked the question: Given that Google is aware of the domain why weren’t all of the listings associated with this domain removed from Maps?

David asks a good question. Has Google really fixed the problem if the many records that flowed into Maps via the hack are still there?

This is indeed a great post. Keep up the good work!

[…] Locksmith spam in New York is so bad that it has even taken over well-known, venerable institutions like the Morgan Library and the Plaza Hotel. […]