The Locksmith industry has always looked to me like an industry of self dealing and dishonest promotion that, when combined with Google Maps, created a mosh pit of sleaze. As a result I never examined it very closely in the context of Google Maps.

Locksmiths are a little hard to love. They aren’t Mom and Apple Pie, they aren’t florists who we can all identify with when things go wrong. The industry is hyper-competitive and they have been at the forefront of cracking all sorts of locks, unfortunately not always the ones that they should be cracking. They were early into blackhat reviews, one of the dominant sources of bulk upload spam and were first to the party in compromising the records claimed in the Local Business Center.

Google wasn’t their first target. The “blackhats” in the industry have used whatever marketing vehicle was “au courant“, whether it was the phone books, 411 or now Google and Yahoo.

Here is a BBB alert from 2007, BBB Warns Consumers of Nationwide Locksmith Swindle and a recent ABC news article and video. The Associated Locksmiths of America provides a list of over 110 news reports over the past several years from across the nation detailing the abuses*. As you can see, consumers have paid the price of these many scams with high prices, rip-off installs and even theft.

But the reality is that Locksmiths come in varying shades from white to black and consumers are not the only ones short changed when the blackhats are allowed to abuse the system. The legitimate locksmiths suffer as well. Folks like PureSheer feel it necessary to go “black” to compete but many are just left with the loss of business and no real understanding why.

Google is changing the playing field of local marketing and they are defining it in a whole new way. They are on the battle lines between doing it right and letting the “bad guys” have their way. If Verizon can pull a hundred thousand phone listings from the directory, is it too much to ask of Google to be vigilant and proactive?

Here is a search,”emergency locksmiths NY NY” on Google that shows how deeply the problem is embedded in Google and why they need to be more proactive in their mapspam battles. This search highlights not just the spam problems but the downsides of some of Google’s decisions around the Local 10 Pack. It illustrates why it might be a good idea to refine it in such a way as to prevent “branded” searches from dominating an obviously generic search and to minimize the impact of the business title on relevance and rank. 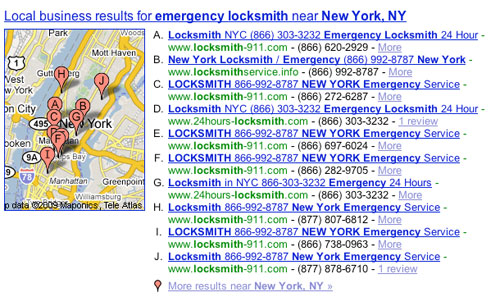 Every number here goes to the same call center, located who knows where, for dispatch of (at best) third party providers. A quick count in Maps of the domains showed over 5000 listings.

The problem is not just in NYC but rather it is nationwide. As you fan out across the US, every major market seems to be polluted with a criss crossing network of spammy listings often dominating the 10 Pack:

Each number in the domains often leads to the same call center as above. You often can switch the name of the cities (in each domain) or the location of the word ‘locksmith’ in it & you’ll find that it is often owned by the same folks or others with similar intentions.

Another search technique that uncovers lots of similar and probably related listings is to add the three digit area codes to the search. I have not tested all of these domains but the result is likely the same:

Here is a measles eye view of the locksmith “locations” in San Francisco (also see NYC view) that graphically portrays the extent of the index pollution problem: 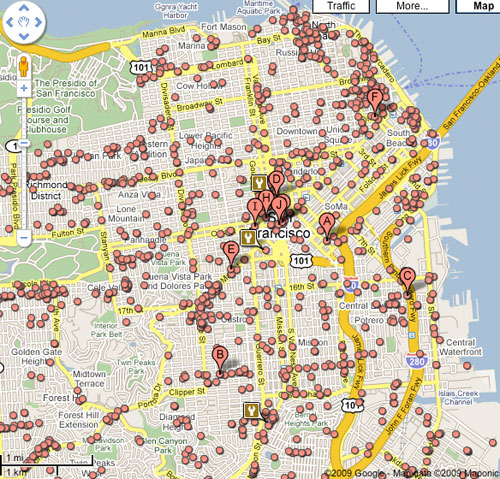 Isn’t it time for Google to stop reacting to spam and establish a more proactive policy of removing it from their index? Is banning a few blackhats enough? Should they not be actively searching them out and banning them all?

* Here is one with no little irony: Blagojevich Administration Suspends License of Dependable Locksmith for False License Information

Google maps is giving the spammers all the lee way they need. If you are a legitimate mobile service, no matter how reputable, if you don’t have a walk in site Google condemns your business to death.

Here is a link about ABCs new show called The Lookout. They recently did a detailed story about our organized Israeli crime family’s that are impersonating locksmiths around the world.

I’ve been a locksmith for over ten years. Here in Colorado This was never a problem then, and now it is a serious issue. I’ve written a lot of articles on how these “black hat” locksmiths work. I’m also tired of all of the complaining over this subject. We can all play the same games that they play, but only better. These guys offer horrible customer service, and are even worse at the work they perform. If you are a “Good” Locksmith, then there is no reason that you can’t play the “grey area” in online marketing. I took the time to learn how to fully optimize everything about every thing online. I learned a lot from blumenthals.com over the past 4 years at least. We all know that it’s a problem, Google knows its a problem. Guess what? They don’t care. They make millions off of these guys clicking on each others AdWords advertising each month. I feel like locksmiths would rather complain about it rather than doing something about it. I’m now in the game, and I’m going to be the Lebron James of Locksmiths. These locksmiths would not be a problem if other locksmiths did not allow this to work. I’m not going to allow this to work in my town any longer. By saying all of this I’ve probably put a price on my head, and I won’t be alive long enough to help anyone. Thank you Mike Blumenthal for everything you’ve taught me over the years. By reading the info you’ve put out, I’ve been able to rank above these “spammers” and put food on the table.

Please share some specific things that have worked for you so far.

This article was originally posted in 2009. Run Local is out of business and it appeared for a while the scams had subsided, but they’re back – in force. In fact, they’re as strong or perhaps stronger than they were in 2009. I’ve found and reported scams in most major markets where spam listings occupy 2-3 of the top spots in local search results. Google will remove them if reported, but they are very, very slow to do so and as they do, new fake listings pop up immediately. There is clearly spammers working on this full time and they are gaming the system again. Google is losing this battle. Searching for a local locksmith in Google has once again become a joke.