In June of this past year, as Google My Business Website reached the age of one, I noted that businesses had created 2 million of these single page mobile ready websites. 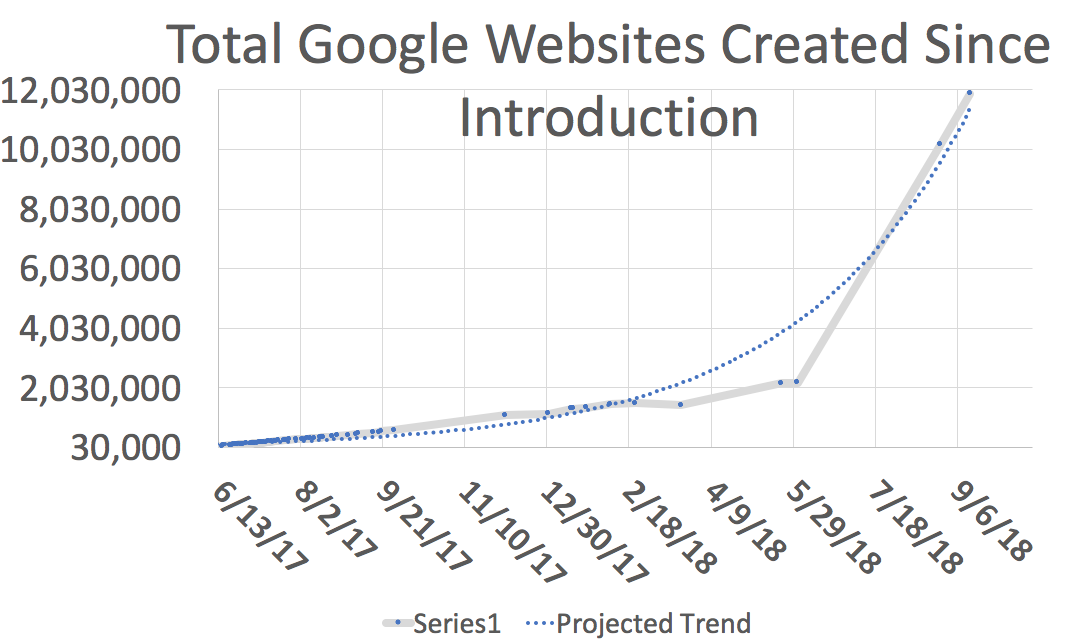 While growth in the developed world was solid, growth in Asia was spectacular. Both Indonesia and India have each surpassed 4 million sites in their countries. Indonesia saw increases of 309% per month while India saw monthly increases of almost 200%. This incredible Asian growth story boosted world wide growth to 125% growth per month.

The top 10 spots for the leader board of the countries with the most Google websites saw 9 of 10 countries the same as June. Viet Nam, with monthly growth greater than 100% replaced Germany in the number 10 spot. And Indonesia’s outsized growth allowed it to take the number one position from India.

Some Factoids to Think About

What does it Mean?

Google built Google My Business Websites for the “next billion” users or so they said. The reality is that in much of Asia, where the population never used the desktop web, Google had fallen way behind Facebook in SMB penetration & adoption. They had been marginalized. Google needed an “open web” so that they could leverage their existing technologies to understand what these many businesses were doing and where they were doing it.

When the open web never developed in that region as businesses and users jumped right to the Facebook app on phones, Google was confronted with an existential threat. The resultant Google website product, which has garnered them both basic business listing data and more nuanced information about the businesses there, was an “open web” created in Google’s image.

In this Googly version of the “open web” not only is Google able to control aspects like the speeds of these websites on mobile but is able to understand consumer behaviors when visiting them as well.

No Analytics needed here as Google already controls the whole enchilada. While Bing and Yandex can scrape these sites for inclusion in their indices the bulk of the data benefit accrues to Google and to a lesser extent, the business creating the site.

The impact of these sites on the current ecosystem of websites in the developed world has so far been minimal. These sites are not (yet?) really a replacement for a well done website and they don’t offer anywhere near enough “juice” to compete in the world of SEO.

But these sites do and can rank and they do in fact suffice for many low level uses. In the developed world, as currently designed, these sites function well for any business that doesn’t already have a site, or may have an old non mobile, that don’t have the resources in time or money to build a full blown  site or perceive that the gains are not worth a larger investment.

What is turning out to be a competitive Asian strategy for Google to attract the next billion users (and several millions of businesses) could very well end up being a disruptive force to web development at some point in the future in the developed world as well.

We have had clients make these on their own as the temptation is great. As you mentioned in the article though, the sites are not very good. But they do serve a purpose for companies that cannot afford a more complex website.

Since Google is known for improving their products over time, one can only assume that with the stated adoption rates, Google will invest in the platforms ability to make more robust websites and that could be a huge disruptor for companies like Wix and Squarespace.

@Robert
It’s hard to know where Google will go with the product. Certainly the developing world and many, many smaller SMBS in the developed world need a simple, fast, mobile ready product. Google certainly has a huge market in just that niche.

But you are right, they continue to improve the Websites product… they have added posts, photos, the about section, the Services/Menu sections of the GMB to it and it is starting to flesh out.

I think the most vulnerable to Google’s bottom up move are sites like Wix… but time will tell whether they are in fact impacted by these developments.

Thanks Mike. I am new to your blog and love it!