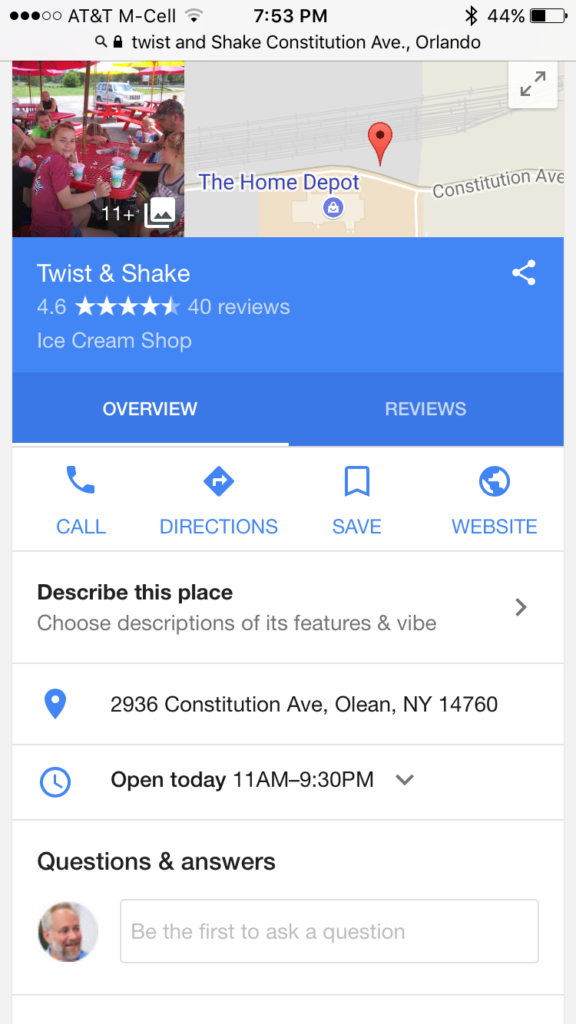 Google Local’s Q & A feature is now rolling out to mobile browsers on the iPhone and Android. On the iPhone the feature is visible on both Safari and Chrome.

Sergey Alekov, an SEO specialist in Toronto, was first to notice the products increased visibility.

When Questions & Answers was released for local Knowledge Panels earlier this month, it was only visible from within Android Maps and only editable by business owners. Earlier last week editing was opened more broadly.

The feature has not yet rolled out to the iOS Google App or Google Maps but I assume that it will at some point show up. Probably sooner rather than later. I also assume that as Google gets more comfortable with the product it will ultimately show up on the desktop as well.

The rollout to mobile browsers and iOS make the feature significantly more visible to the public and thus much more likely to attract crowd sourced content to your Google local listing.

Now is the time to start posting your own Questions & Answers to your branded Knowledge Panel. For some ideas on how to proceed see my see my post 11 Tips to Optimize the New Google.

Will this help with Local SEO?

@Shafiq
That depends on what you mean by Local SEO… if you mean how many visits you actually convert from Google Local then the answer is definitely yes… it will either encourage or if not controlled, discourage users from deciding to purchase from you or your business.

Can they harm your business? Absolutely. You will need to monitor these closely to be sure that competitors are not spamming you.

While these answers might someday impact how Google understands your business and shows your business on different searches, I do not think that is the case currently.

I can’t imagine monitoring those for 1500+ listings. There is no notification system and no bulk upload on desktop.

The only efficient solution, in my opinion, is to leave the review & Q&A monitoring and management with individual store owners/franchisees/managers.

@Sergey you are right but the woefully underdeveloped Q&A has problems you can drive a Mack Truck through on the notification front.

As a side note, we are working on providing more granularity and control to Google review response via GetFiveStars with the hope that at least some of it can be centralized (or distributed) as appropriate.

While paying attention to 2 smb’s wherein the owner generated an enormous number of positive fake reviews and simultaneously seeing google only partially disable abt 1/3, still leaving an impressive # of fake reviews plus impressive ratings I can only imagine how spammable this feature is.

To try and get google to respond on the remaining 80% fake ones takes a lot of time.

This feature is so eminently spammable with softball questions and responses by the owner or ripping questions by competitors that I’m flabbergasted google would promote this.

Deep down they have known for years they are weak on spam. They don’t seem to care. They aren’t held responsible. Ultimately they figure out a way to monetize the crappy results such as getting creepy spam businesses such as rip off locksmiths to advertise on ppc.

Google benefits from it.

This crap is amazingly manipulative. Ultimately consumers will get the raw deal and google will make money off it

Google will remove this feature in a matter of months.