Update: Google has confirmed that Messaging is officially rolling out. See the Messaging FAQ here.

There have been numerous reports today of Google Messaging, the direct from Knowledge Panel SMS chat feature, rolling out more broadly.

Whether this is an early rollout or a late test, it is hard to know as Google has not yet announced anything. The rollout does not seem to be veritcal specific as it is showing up in everything from lawyers to hotels and restaurants but not in all that I have checked in each category. 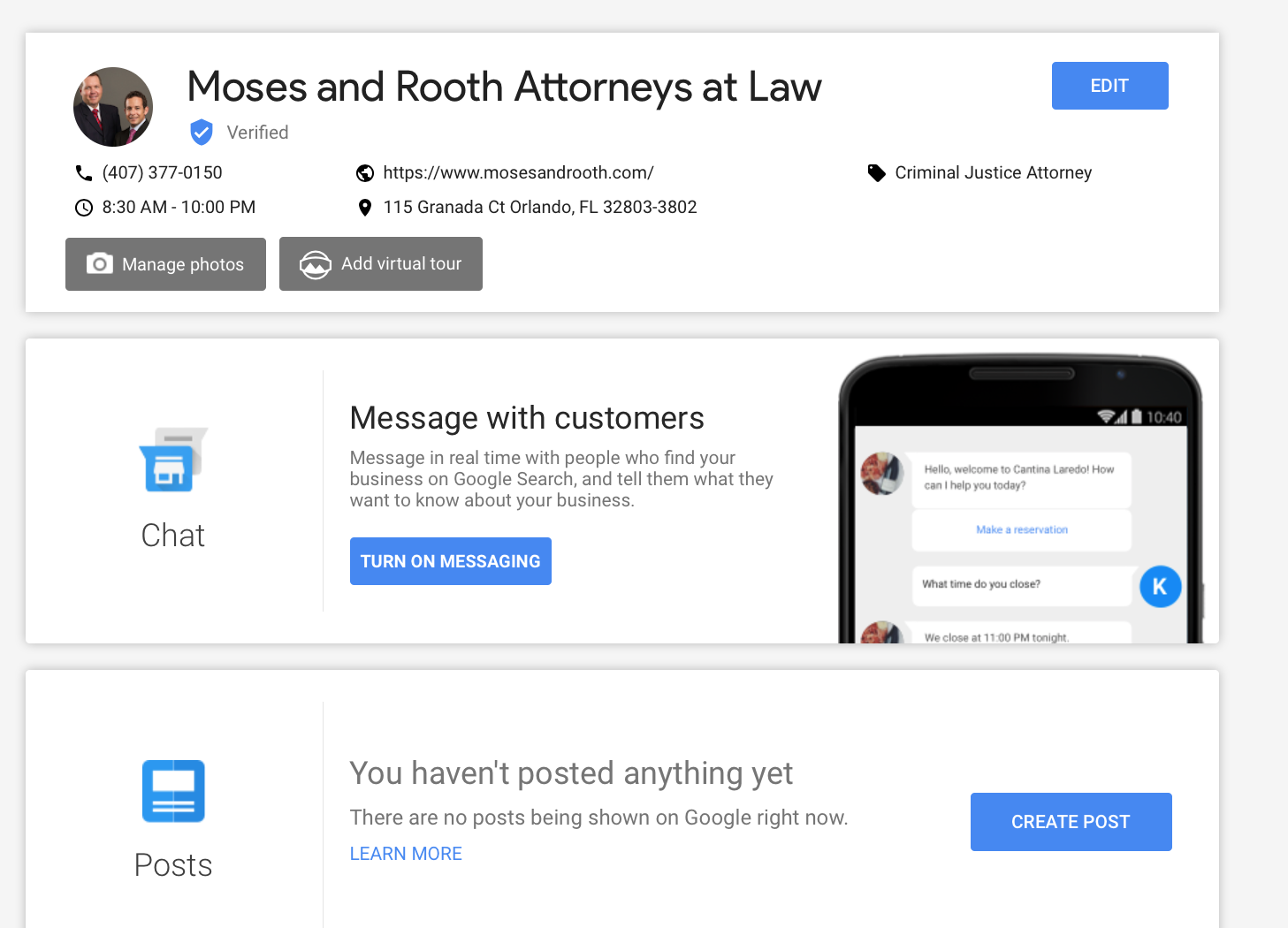 The product was first trialed in November, 2016 and has been in an active public beta for a number of months. The Help Page. titled Chat with your customers, has not been updated to note that it is anything more than a pilot. But given Google’s recent product rollouts of Websites and Posts, it is not hard to believe that release is imminent. 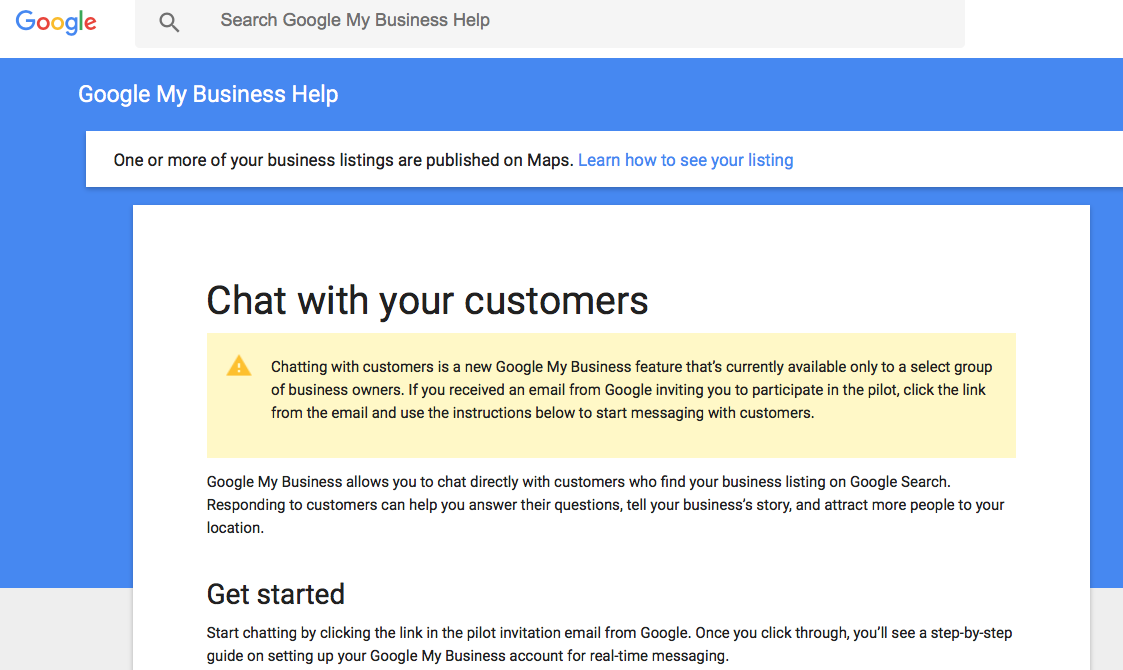 The product allows the business to “listen” to the messages either via SMS or Allo. Customers are advised on the typical business response time. 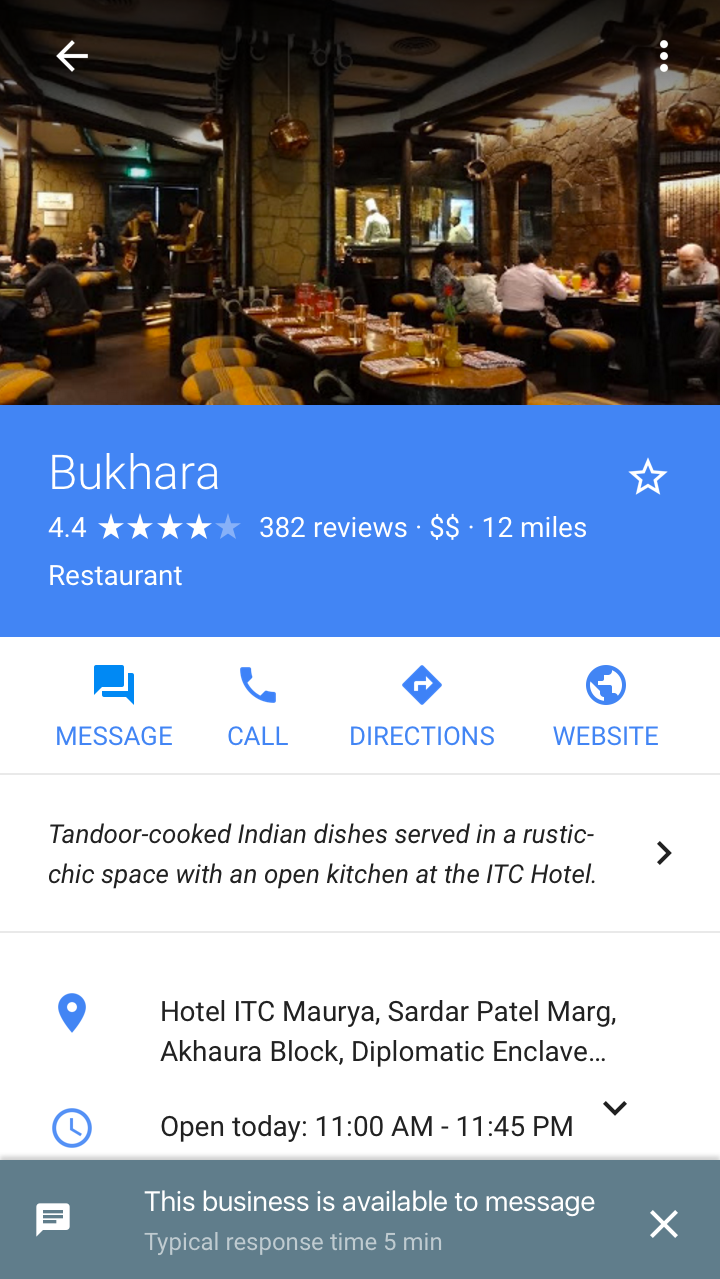 Google has been giving business owners more and more reasons to visit the front page of Google for their brand search. It seems that with Messaging, Google is attempting to give consumers a reason as well.

Are you seeing Messaging in your dashboard?

I’ll be curious to see how many people actually message the business.

I periodically get inquiries through FB about hours, reviews/suggestions and services, but I can’t imagine this being a commonly used feature on Google.

It may be more useful to get the ‘This business is available for messaging’ + ‘Typical response time X’ flag for click-throughs.

Changing consumer AND business behavior is a big task. That being said the front page of Google COULD become a huge place for consumers to contact a business. Currently we see more phone calls coming from the local listing than any other source so the potential is huge.

I suspect the usage will vary from segment to segment, but I can see the messaging feature increasing the number of ‘shoppers’ wasting an SMB’s time.

Serious prospects are going to do what they presently do; call the business.

@Heckler
No question that the dynamics of this need to be productive. If it just wastes SMBs time and the consumers time, it will go nowhere. I showed this feature to several businesses some said “no way do I want another channel” and several said “I am willing to try”…. certainly a problem if it doesn’t produce results for either side of the question.

I think this is a great addition to GMB and will not be a time waster for SMBs. On the contrary, I think it will make the customer contact more efficient.

Our support productivity went way up at Whitespark when we added live chat to our website. We find that we can give those quick answers much more efficiently on chat than on phone calls. Phone calls can take forever sometimes, depending on the caller. Some people just love the sound of their own voice.

@darren I’m sure for boutique and specialty businesses it will be useful, but for lawyers, contractors, landscapers etc, I think it will be more of a PITA then anything else.

I think this is the part where we all focus on AI chatbots to answer the deluge of dumb questions.

Google tested a “Chat” button back in Nov 2015 that used Hangouts (screenshots here – http://smart-local.co.uk/google-chat-button/) No surprise that it didn’t really take off as all part of the G+ era. Interesting that they are now rolling it out with SMS and Allo. I agree with @Darren and always thought it could be a great additional feature. Not currently seeing it as available here in the UK though.

The feature is showing up on GMB for Gutter Cleaning, Automotive Repair and Topsoil sites in the United States. So I would say it is really spread out to most everyone. When business is slow, turn it on when it is busy turning the feature off would be my approach to trying it. What an amazing amount of information Google will get relative to the listing and location. They would see terms used, discussion time. The problem is how much of a distraction will it be to the small business owner that is also working? Will it help the listing rank better? I know this, prospects want instant gratification if they are ready to buy so why not try.

Young people (24 and under) communicate this way – phone calls are not the norm… so for some businesses, this may be a big deal.

I think different kinds of smb’s and verticals will need to test this to see its effectiveness. We’ve seen the opportunities for our smb’s.

For the other type of smb, texting is only effective in ultimately setting up a later phone call or meeting: Which works but is very rare. These visitors/leads/potentially interested customers ALL know we’ll need to speak ultimately. Texting options create a diversion.

I know texting works for some. I’m quite sure it won’t work for others.

I’d strongly suggest this is the kind of “messaging/contacting/etc” that needs testing to see if it is helpful or not, specifically if you haven’t given texting/messaging a big try beforehand. Great among friends. Maybe NOT GREAT or detrimental for businesses.

No one seems to be thinking about how this affects the hard work of the businesses to create a user experience with their brand….their website. This is just more user data for Google to gather. Eventually Google will try to convince people they don’t even need websites anymore, putting thousands of agencies and freelancers out of business. The tool is incredible clunky and shows a Google voice number on iphones during a chat, which a person cannot call back. Really bad user experience. Works fine on Android of course, but you still have to install Google Allo, which is another roadblock to adoption.

@John
Google is already grabbing the bulk of users and NOT sending them to your website. Not that you don’t still need a website… Google looks at it for both relevance and prominence signals and it strongly influences rank…. but you are needing it less and less as a conversion point.

From the perspective of the most small businesses, they can’t control the user experience so its really a matter of whether this feature fits into their “style” and capabilities… by style I mean does the product meet their objectives… does it improve communications? does it increase conversions? does it detract from sales?

I think that it is is an important product for any business to
1)define what their goals are with it
and
2)measure it meets those goals.

Test, test, test and if it doesn’t do you or your customers right, give it the heave ho…. but at this point not using it because will have more data seems like the least of the considerations.

Just checked through my list of clients and none have it here in Australia yet. I know often we are the testing ground for ideas for many companies since there’s a element of “if it fails there, it’s only an isolated 24 million people”.

I’d be just as interested if they can somehow sign up deals with other social platforms that allow cross connecting services as a means to address the fear of too many platforms for both users and SMBs. Imagine Snapchat styled relationships. Thoughts?

@Marc see my more recent FAQ post as to countries. Australia is not one of them.

Looks like a usual feature – a competing feature against FB, but a little too late in the game.

Also – It’s still not available in the UK 🙁

@Shafiq
Actually I don’t see it as late in the game as the game that Google is playing is different than the one that Facebook is playing..

Google typically services “top of funnel” activity… ie the process of a customer moving from awareness, down to consideration and to the point of making a purchase….

Facebook is largely in the after sale part of the funnel of customer support, feedback and social followup.

Since they serve different parts of the funnel the messaging in Google’s case serves a very specific pre sale need.