In the routine of other research I am doing, I found several listings that definitely deserve nominations to the Google Spam Hall of Shame: 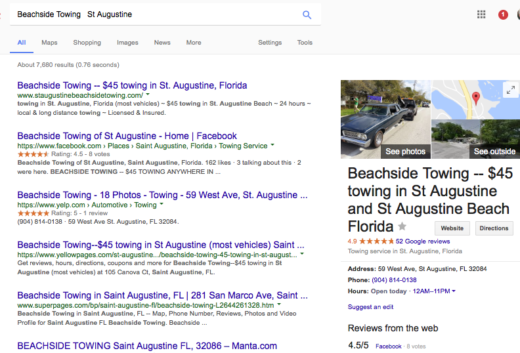 1 – Bill Clinton famously declared it depends on what your definition of is, is. And that it was a matter of tense. In Google’s world this wasn’t a fake listing for the purpose of their study. See what other Presidents had (have?) to say.

Last week I suggested business name edits to 75+ listings – and most of these changes are now published. But why is this up to us?

Last week I suggested business name edits to 12 names in the locksmith industry with keywords and town names stuffed in them. They all came back as not verified :O Presumably because they have created citations on other local directories with the same spam in the Names…? I’m a Level 5 Guide. I want my local map to be a useful resource not a spamfest for cheaters who don’t live locally.

Tl; DR – they are cracking down, just against the wrong people!

As a business owner, I can tell you that they are cracking done and hurting local business in the mix. I operated a second location about 45 minutes away from my primary location in another city.

All of a sudden Google declared that location “ineligible” for listing. They required me to get a $250 business license in that city and get pictures of the building. Three months later, I was told listing would be back up in 48 hours. Response from the My Business team was again it’s ineligible. The only thing I didn’t comply with is having a street level sign. My office is on the second floor, so there is no street signage.

I’ve reached out to the phone and twitter team multiple times which leads to the same conclusion: location is ineligible for listing

@Dave
I presume from the limited details that you have the bad luck to be in a heavily spam industry like plumbing or locksmithing.

This happened to a client of mine that had 25 locations in town. His official presence was reduced to 15 listings in the same metro. Impossible to deal with GMB. All kinds of excuses. In the process I found out Google Street View data shown to GMB staff in India was not the same Google Street View data that was being shown to me as I was able to see the signage these script-drones could not see 10,000 miles away. I hate all of how this is done by Google these days. And hate is the right and very strong word.

I find it quite interesting that lawyer listings get away with just about anything and that niche has massive spamming going on, not just with business names but with ineligible locations, as well.