What Does Google’s Immersive Search Experience Look Like via the Mobile Pack Results? 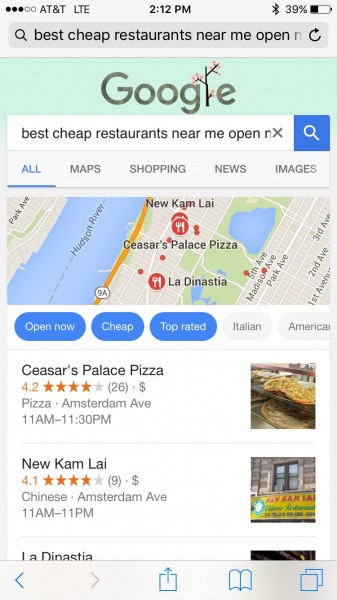 On mobile, Google has been slowly moving towards “immersive search” as the local search experience. Google’s goal is to allow the user to get all of the information that they need via Google, never having to leave for another site. We saw this very dramatically last week with the introduction of Google Destinations. We see another example of this immersion in the current Local results on mobile.

To do this Google is providing their own and other’s content (but hosted on Google for speed of course), multiple paths and numerous related carousels so that once a searcher has moved down the proverbial rabbit hole by entering the Local Finder, every piece of information about the local search is immediately available to the user until such time as they have made a choice and either executed a transaction, called or visited the website of one of the search results.

Watch this video to see how a user, once they select entrée to the Local Finder on mobile is first presented with an infinite scroll, and then as they dig into the results numerous alternative paths to explore including the new expanded “People also search for” functionality as well as StreetView, interior Streetview Trusted, reviews, leave a review etc.

In the restaurant industry there are assorted calls to action for transaction completion available to the user as well including booking a table and ordering food to go. Most significantly note how Google has totally sucked up Menu content and is now presenting that content completely within the context of the local Knowledge Panel not on a 3rd party site and the content is hosted on Google.

While not as “immersive” even standard local searches offer much of the same experience although with obviously less detail. I recorded this video as I was looking to see where Independent Motors, a car repair facility in Boulder, showed in the search results on behalf of another client.

Do you know if the menu data needs to be marked up in schema for Google to get it, or are they pulling it in for most restaurants with a html “menu” page?

@Darren as long as it is readable and identifiable as a menu Google will scrape it. Schema is not required but would really help if there are multiple locations with different menus.

Very interesting post with video. The “immersion” phenomena (did you coin that phrase?) is undoubtedly powerful. Ultimately it will kill traffic to other sites. In the restaurant world possible traffic to yelp, to tripadvisor, to the restaurant websites themselves, to other guides, etc. If there are outside services such as delivery services, or booking for reservations…it ultimately suggests that in order to get that access…the delivery services or booking a reservation service will have to do it through Google and give them a cut. Maybe not now…but could be later.

But in March 2015 the Wall Street Journal released leaked documents from the investigation. Internal staff inside the FTC wanted to pursue Google. The head of the FTC ruled against that. But the “nut” of that research were that the staffers felt there were anti competitive practices.

Google agreed to “unreleased” agreements to reduce what they were doing…but it seems the immersion process takes them back there. Less access to different vertical search engines….less access to other websites outside of google.

This is really HIGHLIGHTED in mobile as your video shows. Its interesting I have yet to add an app to yelp or tripadvisor on mobile. When I do go to those sites..after seeing a few reviews…Yelp and TripAdvisor are cutting off the remainder and bulk of the content.

They are dying and desperate to get me and others to use the app. I suppose that is there only possible response to the control Google has on Mobile response. (I’ll install them).

Its a tough battle out there. I’d add if the Godfather, Vito Corleone was a real person and alive he’d chuck all those other “gigs” and try and become Google. Its a better gig and infinitely more profitable…on top of which the US government doesn’t seem to give a hoot!!!!

@Dave I first heard the term uttered by Google themselves at a Local U.

As a ‘searcher’I like it.
As an SEO, I’m not sure what to think yet.
As an SMB, I’d be concerned… and in the interim, ensure I have good reviews and engaging photos, etc.

@Andy: Boy I liked the way you broke down your responses. Personally though as an SMB I’d be worried “sh!tless” as it suggests I’d be ever more dependent on google. 😉

@Mike: C’mon Mike…how about responding to some of the other observations– 😉

and @Mike and @Darren: I suspect the “on the clock” “thing” ultimately will mean more $$ for google, and possibly less access and possibly less $$ for the competitors. Google is setting us all up!! imho 😀 (my $0.02 rant for the moment)

Love that the pizza place misspelled their own name in their GMB page :-/

Its really an local local only for Google now.
As seen in the 1st video Google is really trying to capture the local market.
Mike don’t you think that Google will start monetize local as well with such user experience.

Here is where the powerful immersion sequence further assists Google. Its about knowledge.

Only google knows what is going on with searchers and searchers on a scaled basis. If one searches underneath the ads and pac in an urban setting one could peruse through the various and often seen websites such as yelp, travelocity, tripadvisor, other directories, local restaurant sites, local references to restaurants etc.

IF one bypasses the pack one gets to those sites and the sites that get clicked on have some awareness of what is going on and the traffic they get.

The various urls that provide similar information to the google immersive process pick up the dregs; the traffic underneath the knowledge box and ads. Google picks up the majority of traffic. Lets estimate in a broad range 30-60%. Everyone else splits the dregs…possibly with the highest ranked url below the pack getting the most and it diminishes thereafter.

If one works his/her way through the immersive process narrowing down through filters such as on the restaurant side….price range, cuisine style, hrs of operation, etc….google not only keeps the traffic….but receives enormous volumes of data. Its knowledge.

As I worked through the immersive situation on restaurants it reminded me, and from an information basis, seemed to completely replicate what yelp has done for restaurants. I can filter by endless ways….

With yelp I can filter by proximity, (defined various ways) price, highest or lowest rated, cuisine types, and possibly more variations. Alternatively tripadvisor has some filters but nowhere as detailed as yelp.

The google immersive environment replicates the Yelp filters. On that basis I suspect Google will pick up a level of volume of information that sites such as yelp were able to gather by analyzing on site traffic. Now most of that effort will end up in google …not yelp or any other website.

Google gets tons of traffic and intelligence…virtually nobody else has it. Its been the case for years. This just raises the ante.

If our businesses had received a visit via a yelp reference in the past…assuming visitors worked their way through some “filters” as in the restaurant example; yelp would know in the aggregate how visitors got there through their own internal review of aggregate traffic. We wouldn’t. We’d only know we received the traffic via yelp.

Now more so with google. The difference being that google’s search traffic is astoundingly greater than that of a site such as yelp. From an old perspective its share of search is at monopoly levels as the feds used to define it.

So its share of search…its monopoly of time…..and from the absolute perspective of taking advantage of monopolistic status…its an overwhelming majority of knowledge that NOBODY ELSE HAS.

So even if google doesn’t monetize this data or process now…they’ll have the singular ability to do so in the future. Nobody else has this data…not even the government. It is, as David Mihm once said, Google’s world.

Over the years I’ve had a lot of connections to owners in the restaurant world. I do a “wee bit” of seo type work with them on an ad hoc basis. I’m not an authority. From my observations though the operators in this industry are incredibly disconnected from how much Google does or can impact their visibility to the public. Clearly there are other sources of access to the public. Google’s though is large.

I’d merely suggest that the restaurateurs out there are, unbeknownst to them, having their “visibility testicles squeezed by a search giant” and they don’t even know it. The industry watch dogs and/or their associations and lobbying sources don’t seem to be aware of it.

Sooner or later a lot their money is going into Google’s pockets. When I don’t know. But I suspect it will start flowing sooner or later.