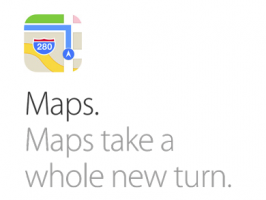 Apple, in a path eerily similar to the path that Google took during their first years of on-line mapping, has publicly acknowledged that their vans are being used to supplement their Maps data.

Google Maps was first rolled out in February of 2005 and  started their StreetView program in May, 2007 in  only five cities (Denver, Las Vegas, Miami, New York and San Francisco). By October, 2009 Google had replaced TeleAtlas ( having switched from Navteq a year earlier) as their data supplier in the US with their own base map and road geometry data from StreetView.

Apple Maps was rolled out in September, 2012 and Apple’s street view vans were first spotted in February of this year, 29 months after the introduction of Maps compared to Google’s 27 months. Given that Apple, like Google, is building their capacity internally they can’t be expected to move significantly faster than Google. They do however have the benefit of being able to study Google’s history and priorities which might allow them to avoid some of Google’s pitfalls.

Apple has rolled out a new page on a subdomain on their web site detailing that the vans that have been spotted are in fact being used to improve Apple Maps data quality. (H/T AppleInsider).

Apple is driving vehicles around the world to collect data which will be used to improve Apple Maps. Some of this data will be published in future Apple Maps updates.

We are committed to protecting your privacy while collecting this data. For example, we will blur faces and license plates on collected images prior to publication.

In addition Apple is listing all of the cities that they will be driving in during the second two weeks of June in the US, UK and Ireland:

What? No Olean? Hello?

Mike: Thanks for the review and history. That Google supplanted Navteq and TeleAtlas with its own mapping data speaks to the effectiveness of this methodology. Apple has similar if not more resources ($$$$) than Google and can do the same. Its an awful lot of “manpower”. But its clearly doable.

Meanwhile if Apple isn’t getting to the thriving metropolis of Olean I suggest you drive around, take pics and submit them to Cupertino. People and especially IOS owners need to know where to get groceries and a good beer and wings in your neck of the woods.

If you would be so considerate they’d probably send you maps of where to find superior tacos in spots like Cupertino or Pleasanton, Ca.

@Dave
It is interesting the parallel path that they seem, for now, to be taking. And man you are right it must cost oodles of $$$$. But a million here a million there, hardly noticeable in the scheme of things for a company that generates cash the way they do.

I must say that the fine citizens of Olean are NOT demanding better mapping solutions to find one of the 3 hotels or 4 grocery stores.

Mike: The history part of your article was interesting. Google used Navteq and TeleAtlas….and then they did the work themselves and dropped those two suppliers. I guess they weren’t getting good enough data.

I’ve referenced this in the past. I was friendly with a manager at one of the major print map makers (road maps). He lasted a long time while the web map companies were hiring away their staff.

His comments were that the web companies understaffed relative to what the print company had done. Far less quality control. Possibly one person doing the job that 2, 3, or 4 had done in the older days.

I guess their data wasn’t good enough. Google dropped two suppliers and ended up doing the job themselves. Now it appears Apple is replicating that task. I suppose the “payoff” in creating accuracy and trustworthy maps is worth it. It would appear google’s revenue and profit growth since 2007 would prove that out.

How many other companies can do that besides those two??? Not many. I suppose you can count them on two fingers.

Meanwhile I’m sure the good citizens of Olean know exactly where to go to the wondrous local purveyors of goods and services. We’re not worried about them. We’re concerned about the thousands of out of town IOS folks that tend to flock to Olean to meet the local shaman, guru, and professor and learn about critical issues. 😀

Nice to know that Apple is catching up fast with the Google, it is always better to have more than one options in any segment and a credible one like Apple is great!

Mike: I see you updated this with confirmation that Apple is doing more or less what Google had to do: They both needed to upgrade the data from the mapping sources.

I suppose the data sources couldn’t charge enough to cover the costs of providing better data and/or there weren’t enough customers. Either way it appears the data was faulty when google needed to take pictures and it remains faulty, at least in Apple’s perspective.

Doing a very thorough job of mapping is clearly a very expensive endeavor.