Pigeon Rolls Out in UK, Australia and Canada

Update: Barry reports that it is still rolling out to all English speaking countries except India (thus Indian tech support will not see what you see.)

After a week of rumors and spottings, Google has confirmed that Pigeon has rolled out across UK, Canada and Australia.

What to expect for those of you in those countries? Much of what we experienced here several months ago

A total reshuffling of the Pack results

Narrowing radius around the search area

Spam being highlighted in the search results

In the US, there was also a drastic drop in Real Estate 7 Packs

We have seen in the US a certain rebound as well. Manny of the radius, which were very small to start have increased. Bad quality listings have started to disappear and the quality has slowly, slowly improved.

Get ready to use the report a problem button a lot in the coming weeks and months.

Example search “Mobile Phone Repair Southampton”
Here is a before 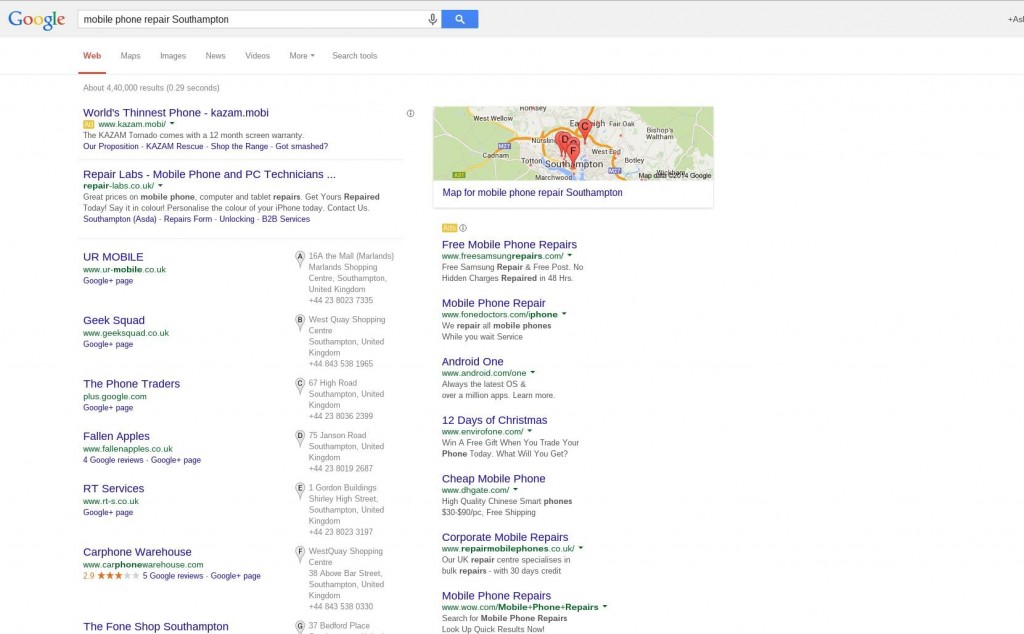 And after (still visible from Germany for example) 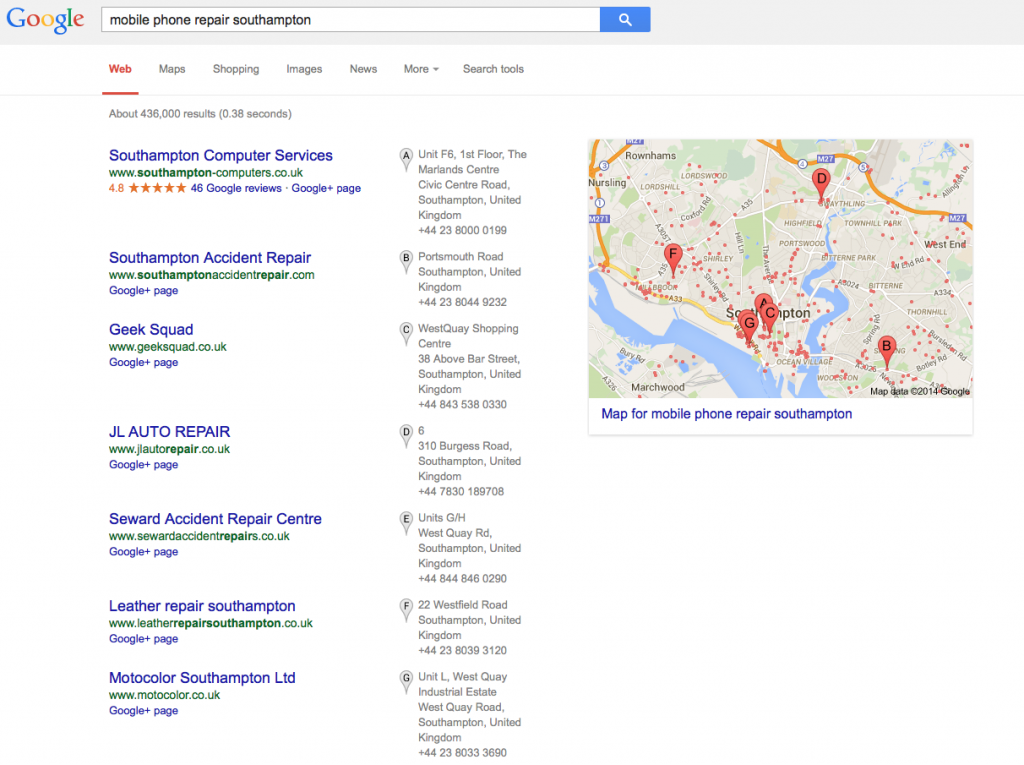 Yep I called it Friday. When Myles told me Thursday he was seeing major inconsistencies between the old and new Google maps I immediately told him “That smells like Pigeon”.

I did some checking with others and started seeing enough reports that I went ahead and called it as a update Friday morning. Even though it was too early to tell for sure, my gut just told me this was it, so was good to get official confirmation.

Your example above is a really good one, Mike. All those unrelated results just because they have “repair” in their name.

Hang onto your seats overseas. Could be a bumpy ride for awhile!

@Linda
Yes hang on to your seats for sure. And just before Christmas. Google has a cruel sense of humor.

I wonder if it has been refined any from the original US release.

The only real impact I am seeing is packs where there were none before. Industries like SEO and Website Design rarely had packs in the UK but now it would seem they do more often than not (based on our small sample).

There also seems to be folks in these listings that were strong organically but had no local listing previously. This makes me think that signals such as links are more of a factor. We actually see a few companies that we know are out and out link builders doing well in local packs now that were not doing so previously. Great if the link popularity aspect of the algorithm was still not so easily gamed…

On the whole though, no major shifts for the 30 or so clients of ours so will be interesting to see how it pans out.

Will update you if we see anything on the ground here in the UK.

Yep, some London phrases on Google.ca are pulling United Kingdom results… not good for users OR businesses in London, Ontario! “real estate agent london” is showing a 7 pack of UK results.

Just before Xmas true…but hey most of us have shopped already right?

Nice notice here, Mike…and I noted that both real estate, funeral homes and lawyers are affected as we have clients in all three categories….

I noticed this big time right away. Most of my sites changed in ranking and many 7 packs turned to 3 packs. Most went up but a couple went down. I suspected Pigeon had unrolled and am so glad to see it confirmed here.

Pigeon seems to still be unfolding and changing even now as sites go up and down in ranking. I noticed a couple of sites that had been #1 for years finally dropped. They were sites that really shouldn’t have been first at all since they were iffy sites with little content and no citations. I didn’t get why they stayed in first for so long. Anyway they finally budged out of first. I see it being quite volatile (maybe that word is too strong) but quite unstable still.

We are seeing a lot of new pack visibility. 2, 3 and 7 in areas that previously had none. They don’t seem to be the best quality in many cases and it seems the folks doing link building and older SEO – the kind we are warned away from seem to be winning out in the small / local business space.

There are a lot of listings popping up with barren Google+ pages and very little with reviews (the odd one) so there would seem to be some opportunity on the reviews front.

Overall it does not seem quite the disaster it was in the US but certainly it would seem to put the onus back on more traditional SEO (on page, link popularity etc) – at least in the niches we are looking at.

Pigeon is going to take away lots of trash, since it flies higher than penguins, so probably will be more effective. Nice to know that spam and bad quality stuff is getting reduced.

Since pigeon rolled out this UK listing is not coming up in google.co.uk

when you google the brand name Pentana Solutions the Melbourne address comes up.

All report a problem to Google have fallen of deaf ears.