Yelp is obviously very, very good with their SEO. They apparently have the ability to sculpt their internal link values to highlight what appear to be the most popular local businesses in the Google local results.

Apparently their ability to do that in their strongest markets is even greater than elsewhere.

These results, first highlighted by Matt Storms on G+ (h/t to Max Minzer)  well before the current local algo update and they are still seen in the SERPS. They reflect on Yelp’s ability to manipulate the search results and reflect poorly on Google’s acceptance of those practices. Yelp, though, needs to be careful of soiling the bed in which they sleep. Although I suppose they could fall back on their all too successful (but BS) cry wolf strategy if Google were to clamp down.

Look at these searches (I am sure you can find more):
Plumber san francisco
Nail Salon San Francisco 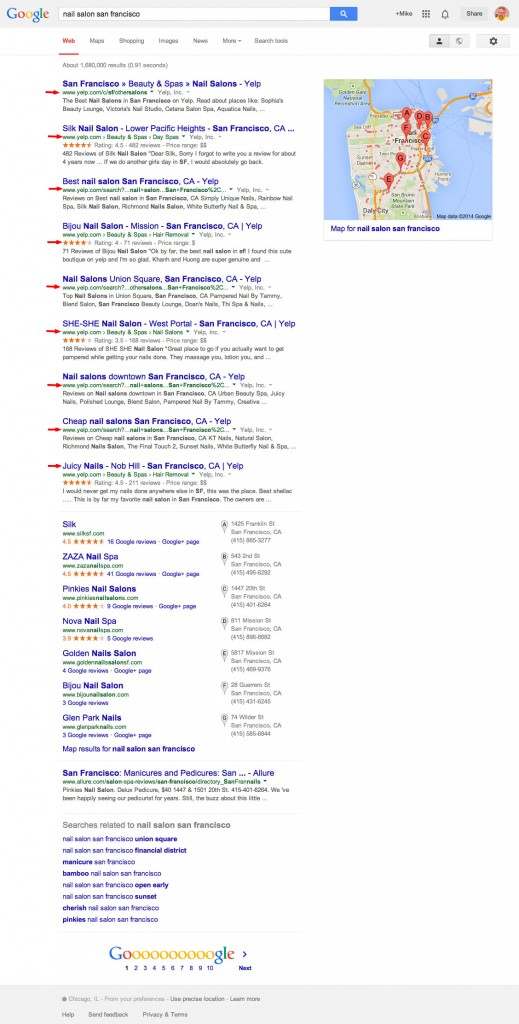 Nice examples Mike! Maybe we should all take Google into judicial antitrust hearings if this is the end result.

Obviously that’s too much is there a secret deal between GG and Yelp ? No one has answer but the latest dev seem to confirm that Google+ is not ready yet to take care about local stuff and since then GG is back to rely on IYP. I noticed for 2 clients I’m working with recently I’ve problem to fix NAP to appear on Geo target because of their YP.ca listing wrong. This didn’t happen in the past and now they’re obliged to buy 50 boxes prog just to update their location and category in YP and other local listings !! Even Mapmaker doesn’t allow me change their address by updating city instead of district in NAP !!

Mike: Those are “first day” results following Pigeon. That very distorted picture, which presents numerous Yelp reviews of the vertical and specific businesses are the results of Google’s results, not a result of Yelp. Several days later and the view is already somewhat different. Google seems to be adjusting its Pigeon algo and/or the algo is settling in.

A Bing.com view of San Francisco Plumbers or Nail Salons San Francisco is infinitely different. Yelp has prominence, but it’s visibility in those search results is one of many different urls.

If anything those results suggest that Google’s new algo emphasizes directories over smb sites. That is very very interesting. We’ll see over time if that remains the case. The examples you show highlight that possibility. On a variety of Google searches across the country in different markets and different verticals I see a lot of directory sites.

I reemphasize: Bing didn’t just change its local algo’s. Its results are very diversified. I believe the real question is what did Google do?

On an entirely different level but one relative to your use of the language and word “sculpt” you should note that Googler John Mu, who often comments on Google penalties, articulates Google’s thinking, and advises webmasters recently suggested certain webmaster’s make extensive use of “NoIndex” in their sites. “NoIndex” was suggested as a mechanism to “hide” weak content. Its certainly a mechanism to sculpt sites. Google is currently promoting its usage per John Mu.

I’d suggest if Google is emphasizing mega sites such as directories with regard to Local Search, its a decision on their part to push up large sites in the local Serps above smb’s that are traditionally tiny relative to the size of directories. Local business sites are also small relative to department stores and chains.

At this point in time I’d look to Google for those very perverse results, not to Yelp. Alternatively search for local smb’s in
Bing. Its results are far more diverse with many more choices. Bing will still give prominence to Yelp in its results for San Francisco businesses, they just won’t flood the SERPs with the same base URL, over and over again.

Have to think that’s a temporary anomaly that will be corrected. Google never lets one company monopolize the results like that.

Mike: I saw the reference. It looked to me like Friday or Saturday’s results were even more pronounced than what was reported on July 16.

Still, Its Google’s responsibility. Bing’s results for the same 2 phrases are dramatically different with many urls including businesses and different directories.

Also, Google’s chief spokesperson on issues often having to do with penalties, John Mu, urged certain webmasters to use NOINDEX for certain situations.

That is a clear page sculpting mechanism. When pages get a “NoIndex” perspective they also don’t get internal link juice. That is page sculpting. Again, Google is suggesting it.

Over many years in many environments there are some twisted results for various reasons. its Google’s algo. They need to adjust it.

BTW: Pre 2005, google’s organic results STUNK for local queries like the above two. Virtually every search like the two above resulted in endless mega directories on the top of serps. Google made a great change, with a patent written up by Bill Slawski. It cured that problem. The above results look a bit like the lousy results from pre 2005. Google needs to adjust it just as they did 9 years ago

Again, look at Bing’s results for the same queries.

So crazy! And we have to work our tails off just to get 2 listings on the first page for a client. Well played Yelp. Well played.

I tend to agree with Linda —> “…a temporary anomaly that will be corrected. “

This is ridiculous, the examples in San Fransisco are almost comical.

My thoughts are in alignment with Linda and Andy, SF results are a “temporary anomaly”. It will be interesting to see how the results shift over the next several days.

According to Matt Storm they have been pretty much this way since July of 2013, a year.

@Dan
I love the Yelp product. I just don’t always like their tactics. Google is no better.

We are on the same page, I just like to tease.

@Dan
Just for the record it has been more that ONE whole month since I last tweaked them.

Admit it though, while you understand why, don’t you find their whining somewhat annoying?

I did the same searches but used Los Angeles in place of San Francisco as I know LA is also a Yelp-heavy city, and the top 3 or 4 organic results of each SERP are all Yelp too. Not as bad as SF, but still dominating.

Not even their own local results above Yelp. One thing you have to take into consideration here is the mass adoption of Yelp in San Francisco vs everywhere else but those examples are still wild.

Back in April I did a rough survey of the top 32 cities and Yelp averaged 1.3 in Google for dentist reviews of that city. Here’s a screenshot of the results:
http://www.screencast.com/t/5SCh0U2xs

Chris
It would be interesting to follow up post-pigeon to see if it has changed.

I’ve gone through 16 of the 32 and Yelp is still mostly in the top 1-2 positions for “City Dentist Reviews”….

Not really any major changes, but this is not including local listings (since Yelp or other 3rd parties can’t take a local spot).

Chris
Thanks for doing that!