I did not notice this before but as the new Local Carousel takes on the 5-Star treatment, it appears that the Zagat brand is taking on a higher profile or at least its Z is.

This seems odd to me given Google’s move away from the Zagat rating system and having laid off all of their temporary Zagat workers and replaced them with full-time workers from Frommers. Business Insider noted: “The future of Zagat book production looks extremely bleak,” says a source.  “The whole division as currently structured seems to be on death watch. Lots of chatter about outsourcing.”

It all becomes weirder when you realize that they then turned around and sold Frommer’s back to its original founder. It sounds more like a soap opera than a business transaction but at least they got a lot of data.

As David Mihm asked in this recent comment: Hard to say whether Zagat or Frommer’s was the bigger waste of money for Google…especially when you take into account all of the integration and dis-integration costs. I wonder if anyone on Wall Street is considering Marissa’s track record here WRT her spending spree at Yahoo?

The Zagat name and logo is mentioned at least 3 times in the brand panel as well (go figure – don’t ask me to explain Google’s thinking. $20 million here, $120 million there….is data and the Z really that valuable?): 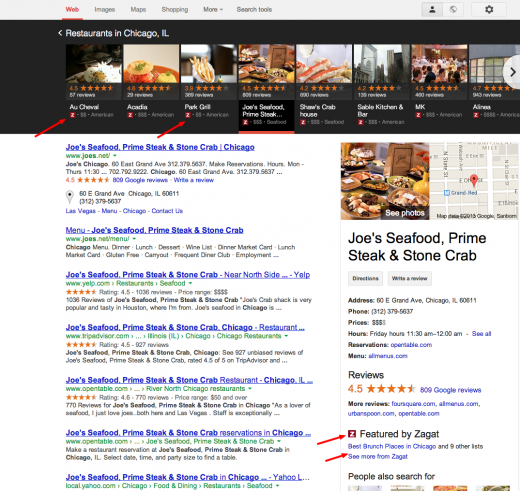 FWIW, the Google Now local business “cards” in Google Glass used to show the Zagat score (22/30 or whatever), but they’re now showing the 5-star rating.

@Matt
I am keeping track. The new iPhone Maps App now also shows the new star treatment as does Chrome on the iPhone. Holdouts: old Desktop Maps, Mobile search on iPhone Safari browser (and some browsers on the desktop).

Not sure about mobile search on the Android browser.