1- Firstly Google has announced in the forums that the new Places for Business Dashboard is now available for NEW users in UK, Ireland. It is nice to see this staring to roll out internationally. That being said the rate of conversions of existing dashboards is not at all clear. None of mine seem to have converted. Yours?

2-Joel Headley of Google noted at today’s Local U in New Orleans that Google was no longer deleting listings from their local index that failed to hide their address. He indicated that Google was flagging them, apparently with no ranking penalty, for later automatic removal of the address if the owner failed to hide it. This solution seems vastly superior to the fiasco of businesses being permanently deep sixed into the hell of “currently we do not support” for the infraction

3- Google is currently testing a soon to be rolled out revamp of the Maps interface. Barry Schwartz noted at SEL:

The new interface is a complete and major overhaul of the current Google Maps user interface. The design and interface changes touch everything from the map colors, icons and text formats to dropping the navigation elements on the left hand side and adding in Google+ integration.

For example, you can filter local search results specifically to friends in your Google+ circles. The navigation seems to have been moved to button like methods, similar to how mobile apps work, with ad overlays hovering below the navigation menus. 4-First noted by Pete Meyers and equally interesting is is the increasingly seen display of the the carousel results for Hotels and Restaurant categories around the US. 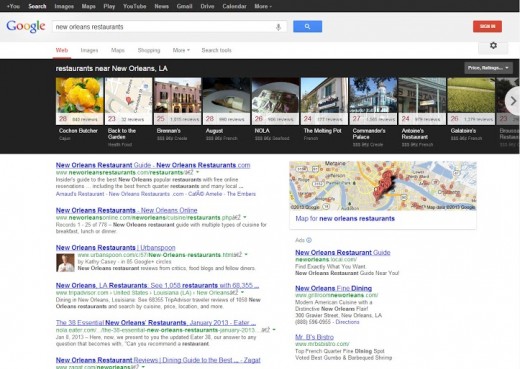 Hey Mike, did Joel happen to say what would happen to businesses currently battling the “currently we do not support” issue? Working on an account that has one of it’s locations in this mess right now. Just wondering if the process is still the same or if they’ll be lifting the bans.

@Mike
I know that support is attempting to lift the lift most of the bans for those that are deserving but those tagged early apparently ended up in database hell and sometimes even the big G can’t dig them out. I am you have already called support?

Can you say “Apple Maps”?

@Phil
No no you have it all wrong it is “innovation” 🙂

Interesting stuff happening… now a slightly off topic question, if you have a new business to create a listing for, is it best just to go and create the G+ Local or Business Page or is it still better for now to create a Places Listing in the old fashioned one.

Google is recommending that all new claims occur via the (new) Places for Business Dashboard. If you claim the business by the link on the Google + page, it will automatically take you to the new dashboard. From there there it is an easy one click widget click to add a social stream if you want one.

Thanks Mike! appreciate the feedback.

I was presented with the hotel carousel for multiple searches throughout the day yesterday…today it’s gone. Most interesting is the fact that it’s above the paid listings. What an un-Google thing to do :). Hope all’s well.

“Google was no longer deleting listings from their local index that failed to hide their address. He indicated that Google was flagging them, apparently with no ranking penalty, for later automatic removal of the address if the owner failed to hide it. ”

Do think we can get back listing then that got deleted due to this? I have one client who lost a whack of listings by not setting this setting right.

Yes if the listing is legit and totally cleaned up.