David Mihm just did a great Whiteboard Friday on the evolution of the local ranking algo. In the article he speculated about the future of local signals:

And just to speculate a little bit, because I love to speculate, going forward I also think we’re going to see Google potentially integrating some offline information into the local rankings. So what do I mean by that? As we get more and more comfortable, we as a society get more and more comfortable with things like Foursquare check-ins or Facebook check-ins, using our phones to make mobile payments, using Google Wallet, or companies like Square or LevelUp, these types of things, loyalty programs, Google has acquired a company several years ago that focused on digital loyalty cards, these types of offline signals about how we’re actually engaging with businesses in the real world, I think there’s no reason that they wouldn’t try to incorporate those into their local rankings going forward.

I would suggest that the future is now and that Google is currently using some mobile signals in their current ranking algo. Certainly, as David points out, Google has invested in a number of technologies (Coupons, Wallet, Offers, PunchD, Talkbing, check-ins) that will give Google on the ground signals as to whether a consumer actually visited a location and consummated a sale. Most of these have not achieved any sort of scale and are forward facing investments that attempt to close the “search to sale” loop for analytics. All could also provide popularity signals to Google when they do achieve some scale.

But Google has two very widespread highly trusted technologies, Driving Directions and Android, that function at huge scale and could be providing signals now.

Alex Garrido (aka Alex Webmaster) has done some interesting local research that seems to indicate that mobile click to calls do in fact affect ranking.

He worked with 5 local clients ranking in the lower spots on front page Google 7-Pack results. Over a two week period he had his 40 research participants do a keyword + city search on their mobile phones and click to call the specific businesses. Two clients were scheduled to receive 40 calls over that period, two were to receive 20 calls over that period and one was used as a control. His conclusion:

To our surprise it turned out to be a major ranking signal often improving the position of a local business by several spots. 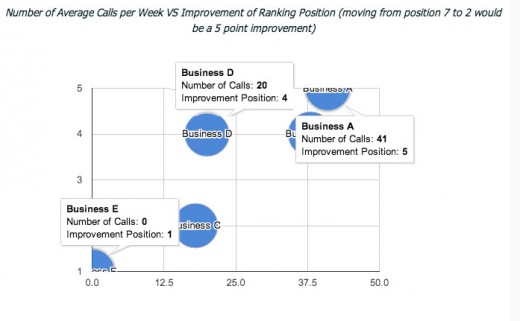 Discussion: This is a small scale study and as is always the case in such situations it is hard to know that correlation is in fact causation. It is also the case that correlation studies are problematic in studying search results. There are a lot of moving parts in the local algo that we can not see and that could have influenced these results. Obviously it is worth carrying out this experiment in several markets over several time frames to see if their is similar impact on rank. Correlation if it happens enough and is consistent enough can then be assumed, with greater confidence, to have some causal relationship.

If it is causal, and the click to calls do in fact improve rank, is the effect permanent? Clearly these results need to be tracked over time as well. And similar work would need to be done in more competitive markets to see if the effective impact is similar i.e. if there are other strong signals maybe this one just doesn’t have much impact.

That being said there is every reason to think that Google might now be using mobile signals in ranking results.

Android is a great platform for Google for a number of reasons, not the least of which is high quality, not easily gamed users signals. Google not only has G+ information about a user and their search history, they can see their mobile usage patterns and often their specific locations. They can do this on a grand scale. One that, unlike the low penetration Wallet or Offers, would offer strong signals world wide even at hyper local level. We know that Google loves data that scales like that.

We also know that Google “trusts” mobile reviews more than desktop reviews. They have demonstrated this trust by publishing reviews from mobile users who were unable to get reviews published on the desktop. This has become more apparent under their new review filtering scheme.

Bill Slawski has also highlighted Google published research examining whether driving directions are an indicator of business popularity (research conclusion: yes). And where are driving direction done more likely to take place than in the trusted mobile environment? Google also shows driving direction requests in the Places for Business Dashboard as an important metric. Often in the past what Google highlighted in local is what Google thought was important. That is very likely the case here as well.

Do I know for certain that Google is using either driving directions or click to call for ranking? No but there is a certain logic to it as well. For example, if a local business were doing extensive offline advertising that lead to increased recognition and a subsequent increase in either driving directions or calls, Google would in fact find that a reliable signal of increasing prominence.

Your thoughts? Have you seen a similar affect?

That makes sense. For a long time I’ve believed CTR to be a big ranking factor (for one thing, to me, it partly explains why in some cases clients can hang onto top rankings even without actually doing much). I see click-to-call stats as a natural extension of any value Google assigns to high CTR.

I’d really be interested in hearing if Alex expands the research. Don’t see any reason not to.

I wonder what queries he had people type in in order to pull up those listings before calling them. That is, were they all brand-name searches, or something else, or some mish-mash of different queries. I would think that the type of queries that result in a high % of clicks-to-call on a given listing would be a huge factor for Google; it would show which listings users think are a good match for what they typed in.

Yes, click to call and driving directions both can be considered local analogs of organic CTR as a reflection of the “value” of a given listing result.

Aexx was not explicit about the search phrases nor the markets but he did not that the phrases were keyword NOT brand searches. And I believe that all 40 (or 20 as the case may be) were the same keyword + city search.

I am not sure if he tracked whether there was a ranking impact on related categories or keywords or not. It appears that he only tracked rank on the keyword he used for the searchers to query on.

Google has invested in a number of technologies (Coupons, Wallet, Offers, PunchD, Talkbing, check-ins) that will give Google on the ground signals as to whether a consumer actually visited a location and consummated a sale.

That makes a lot of sense with the new Analytics Universal they even give the power out to the user to import actions that are off line!

I watched David’s Whiteboard Friday, and thought it was interesting how he put the local search evolution into perspective. Google will be announcing a “look and feel” update to their Google Places for Business sometime later this month. Should be interesting to see what it looks like.

@Bryan
The update was rolled out to a limited number of accounts starting last Monday. It is more than just a look and feel update and you can get a sense of it here.

The research could very well be flawed in that Google adjusts SERP’s to “session based” results. Did they adjust for this? How?

Could you expand on your comment? If 40 users each called 5 businesses and the results wee measured on the desktop how would it apply?

IMO calls to a local business via kw search don’t make a difference in ranking (at least not now)… this just doesn’t jive with what I’ve seen over the years. However, I’ve no stats to back this up. I think it’s very interesting research and would love to find out more. I have some (small biz) Local clients ranking #1 who get considerably less calls per kw search than (large, well established biz) competitors ranking #2 or #3. It doesn’t make sense to me 🙂

Any user action taken and especially multiple actions taken during a search session by the same user to a specific business or multiple businesses, can indeed influence future ranking outcomes for that user and until he/she clears cache. I was only asking if they allowed for a potential “session search” bias. If each participant was not aware, nor take specific counter measures, then their research is most likely flawed.

@Frank
Gotcha. I am not really sure but, as I caution above, correlation studies are a minefield when it comes to ranking influence.