When we think of driving directions, we often think that Google’s omnipresent role in the world of Maps indicates that they dominate the market for directions. When Google surpassed Mapquest and Yahoo in desktop mapping in 2009, it seemed that it was game over. But the current reality of driving directions seems to offer up a quite different picture for market share than search and for maps penetration in general. With the disruption of mobile hardware it appears that Google’s lead in this fragmented market can be attacked. While Google is in the lead, with a market share of over 30% (*see note below as to why the survey undercounts Google’s share), their position in the US market is not overwhelming and not unassailable. This has implications for both those looking to break into the mapping world as well as for the SMB that is hoping to be found by their customers.

I have recently completed this survey that attempted to answer two questions:

The survey was conducted during the the Feb 22 – March 3 period and used Google Survey. A sample of 5532, weighted to reflect the adult US Internet population were asked the first question. The first question was used to screen for iPhone users, 500 of whom were then asked the follow up question.

Driving directions are an interesting use case; they occur at both ends of the purchase funnel and again independently of any purchase intentions. Consumers might look for driving directions after doing a search for a local business or before traveling. But they are also likely to request driving directions first and enter buying mode later. While driving direction use isn’t likely to be daily or even weekly, the product is a stepping stone to more regular and habitual use of all of a vendors mapping products and more importantly provides the vendors with a critical source of current road data. 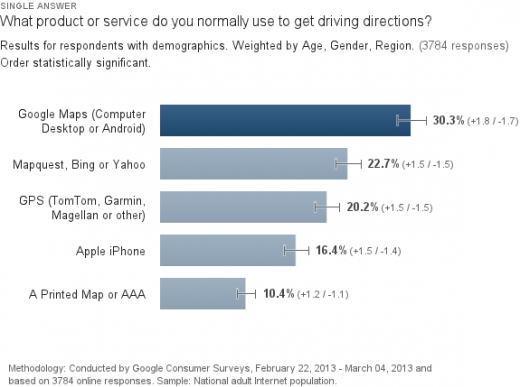 You can see from this survey that usage of driving directions is very fragmented over different hardware and software services. Because I desired to isolate iPhone users and ask them an additional question about their maps usage (more on that in the coming days), Google’s share in the survey from iPhone users is not reflected in the above. It would appear that would add about 6% more users.

The story gets more even more interesting when you look you look at that data by age cohorts. There is a clear preference by those under 45 for Google and Apple mapping products while in the older cohorts there is a significant preference for Mapquest. This implies that usage is strongly habitual and once started it is difficult for a mapping product to change users behaviors. 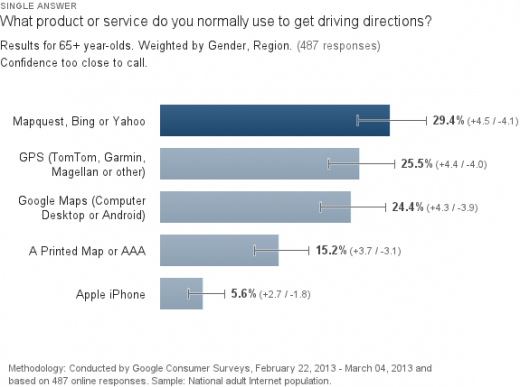 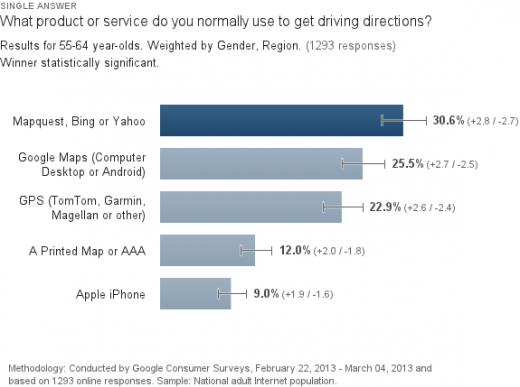 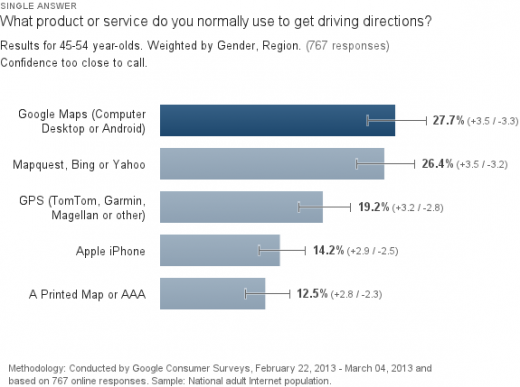 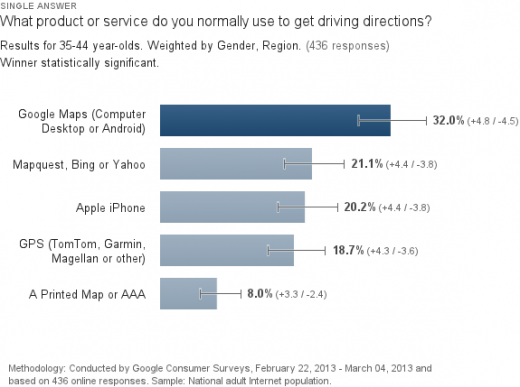 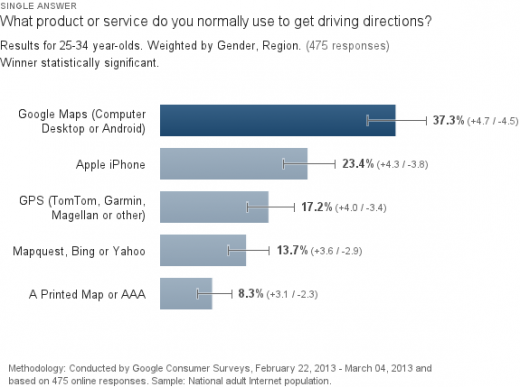 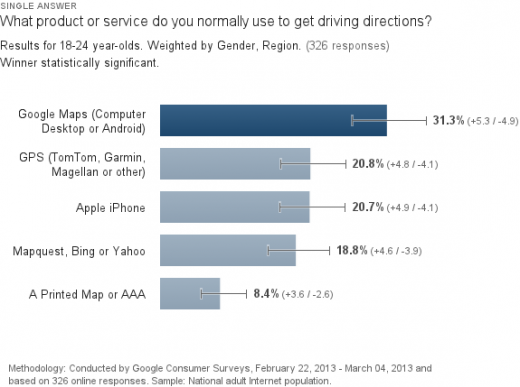 There were some additional demographic items of interest that came out of the survey. Women preferred Mapquest more then men and Google was more popular in the West than in other regions. Some of these granular details can be seen in this graphic.

The market share for mapping services can be viewed as a rough proxy for the driving directions market although perhaps slightly over stating Google’s share. When you look at Comscore market share numbers on the desktop Google’s lead in share of the online mapping world has stayed fairly constant since they passed Mapquest in early 2009.

However the aggregate view that includes mobile tells a different story. It is a story where you are seeing a steady month over month decline of Google Map’s market share that aligns quite accurately with Apple’s rollout of their mapping product. It started in September with Apple Maps rollout and appears to have gained steam over the holiday season. In total, Google has experienced a 8.8% decline in Maps traffic since September.

The fragmentation and state of flux of the driving direction market makes it imperative that SMBs first and foremost check the accuracy of both the mapping and business listing data across all providers. A best practice for the SMB would be to check driving direction accuracy and to check that both their business is listed properly AND that the maps resolve properly across Google, Apple, Mapquest, Nokia, Yahoo, Bing and TomTom. These 7 sources would encompass all of the primary mapping sources and business listing sources. It is all too easy to think that users are just getting driving directions from Google and Apple which in fact appear to comprise less than 50% of the total market.

For the manufacturers and OEMs of these products the story is more complex. Google long ago realized that they could use driving directions and mapping to enhance their business listing information to “beat” the IYPs and they could use their business listing data to enhance their mapping product to “beat” the market leaders in Mapping. They continued to enhance their maps well beyond these two functions, understanding full well that any use of maps would lead to regular users and the ability to “cross sell” other products, features and most importantly ads to those users.

With the disruption caused by evolving platforms, Apple has successfully demonstrated that the leading share of driving directions that Google built up over the past 8 years is not unassailable.

Driving directions appear to be very habit driven thus once a user has established a preference there is a strong likelihood that they will stick with that particular service a long time. Because of their “sticky” nature, driving directions can also become a gateway to all of the opportunities that a mapping portal can provide including local search, reservations, click to call, offers etc.

For providers of driving directions troves of user data are generated. Everything from road accuracy to traffic patterns can be gleaned from usage. The data creates a virtuous cycle of data collection that leads to improved mapping accuracy that leads to increased usage that leads to increased data collection. It is a service that is foundational to most of local search. In Google’s case, Google also gains indications of business popularity and insights into the full cycle of the buying process all the way from search to the likelihood of a store visits.

As such, driving directions are becoming a beachhead in the battle for users amongst the major contenders. Google is well positioned for the battle with both a desktop and mobile lead. Apple’s ability though, to gain a significant market share in a relatively short time, demonstrates a path and a strategy that offers a some hope for driving direction competitors.

The Garmins, Mapquests, Nokias, Bings and Rims of the world would appear to have two choices to compete. One of them could create a break out mobile hardware platform, although that seems increasingly difficult in the current market. They could also all coalesce around a single mapping data set and marketing message for a stronger mapping product and achieve some success. Both alternatives are conceivable but unlikely.

Clearly Apple is a competitive threat to Google. Their ongoing improvements to their mapping product, very deep pockets, increasing mobile market share in the US, total control over their handset and the default position of their mapping product on the iPhone gives Apple a chance to continue to nibble away at Google’s driving direction market share.

But there is another real threat to Google’s success in this market, besides Apple, and that is Samsung. They are the one company that could use Apple’s mapping & driving direction playbook to achieve a strong foothold in the driving directions market that leaves Google with a continuing decline in market share. They have the resources to fork Android, buy a mapping company, develop a competitive product(or use an existing one) that is preinstalled on a large number of phones and gain a solid toehold in this critical market.

Driving directions, long a stable and somewhat boring market, is once again in play.

While there are some stuctural issues with the questions, the survey is broadly accurate.

The first question, What product or service do you normally use to get driving directions?, was asked of 5532 users across a range of sites (News: 51.1%, Arts & Entertainment: 28.1%, Reference: 20.8%) and the answers were provided in random order. Of those, 3784 responses were weighted by age, gender and region to make up the final sample.

Google’s methodology for creating these sample has proven to be very accurate. This resulted is a margin of error of less than + or – 2% at the highest level of the survey and +or – 5% at deeper levels of demographic analysis.

The biggest problem with the first question is the conflation of hardware, software and services. In an ideal world I would have asked users to define hardware platform first and then which software they were using on that platform. It would have also been useful to ascertain usage levels and attitudes. I would have also like to have learned more about user intent. Are users of Apple’s Mapping program lazy or satisfied? Unfortunately these are more limits of constrained resources (mine) than the survey itself.

The 500 person sample size of iPhone users on the question: What mapping or driving directions app do you use most often on your iPhone? leaves a large margin of error of + or – 5.5% in the answer. While broadly accurate , is not large enough to know with certainly whether Google Maps or Apple Maps is used more frequently by iPhone users. Clearly its close game at this point. The sample size was too small ascertain demographic or income trends.

* Note: By my calculations their share including iPhone is just shy of 40%. The survey construct, in an effort to isolate iPhone users and to query them alone, led to an undercount of Google’s reported market share by an estimated 6%. More on iPhone driving direction usage over the next few days.

Where does TomTom gets it’s local info from? How can we update/edit/modify TomTom data? …anyone? Thanks 🙂

@Andy
One way to feed business data to TomTom is via UBL. Road data can be corrected here.

Who is Winning the Apple vs. Google iPhone Driving Directions Battle? Too Close to Call | Understanding Google Places & Local Search
March 6, 2013 at 9:20 am

[…] I published the first question of my driving direction survey showing an extremely fragmented market. It is a category led by Google but one that is fragmented […]