Reader Dimitar Dimitrov sent me this email comment about Google+Local and the attached screen shot of the Google HQ:

I just a reader of your blog (and an SEO freak). I was messing around with the new Google+ Local or whatever they are officially calling it.

We’ve spotted that anyone can upload pictures… any pictures! Check the profile and see for yourself 🙂

P.S: I hope Google will fix this bug ASAP…

Welcome to the world of Google Local. As they say this a feature NOT a bug.

This capability has long been abused on Google Places and the feature has migrated over to the new Google+Local Page. In Places there was an option to report the image as inappropriate. It does not appear that feature has arrived to Google+Local. I don’t know when that will take occur. In the meantime it is not clear what a business should do if he runs afoul of an ex-girlfriend or a malicious competitor with compromising photos.

BTW I love your sense of humor. My only regret is that my own library of images does not include such classics! 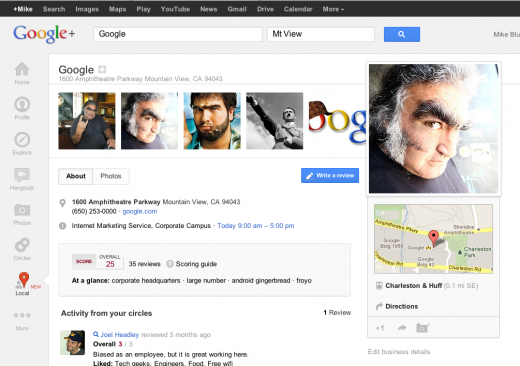 Yeah, I can see how this would get out of hand with malicious competitors. Although, it is a nice feature if used correctly from a customers point of view. Maybe a picture of the food or something along those lines. The one thing is that if you arrange the pictures in such a way (before/after, collage, etc) an uploaded picture may askew the layout.

OMG I just spewed coffee all over my monitor. TOO funny!

A taste of their own medicine – or consequences of a feature they allow at least!

“In the meantime it is not clear what a business should do if he runs afoul of an ex-girlfriend or a malicious competitor with compromising photos.”

You can use Google’s Fix a Problem troubleshooter to have bad images removed.

Maybe Google should use it on the Local+ page above???

@Jorge
It has not been too badly abused in the past but if Google+Local pages take on a higher profile it might be in the future.

@Linda
Yes there is always that option but it is distant from the problem and requires that the observer 1)know about that option 2)be the owner and 3)take the time to head over there.

The new edit this listing/report a problem form does NOT include this problem and the photos themselves no longer have the option.

So while your suggestion is a possibility that I considered when I wrote the article, it is not a very option in most cases.

He sure is as far as Bulgaria goes. He is a famous blues and rock singer from the recent past. A very “colorful” character no doubt 🙂

He must be a real audience boost 🙂 Was he the one who said something like “Most of the current Bulgarian singers are so bad that the only thing they are worth using their voice for is shout out of the toilet that it’s occupied?”

Maybe. I think he is hosting z-rock’s morning show. Obviously he is drunk every single time.

True irony at its finest

Anyone else notice a Google Employee posted a review on that page? Look at Joel’s profile. Isn’t that a conflict of interest? Oh Google…. not playing by your own rules, lol

@Eric
I did see that. I don’t think that it violates any Google explicit guidelines although you could argue that it is a conflict of interest. At best, it is very weird.

+Mike B: It also appears that anyone can create a G+ account and claim their competitor’s, or their own business multiple times. It gives no error or message like: “This is an owner verified listing”. And you can claim it from any Google account, not just the account you are running Places. FYI.

@panzermike – there’s never been a message like “This is an owner verified listing” in Places (now Local+). If you can answer the phone or get the postcard you can claim every listing on the web.

Panzermike is talking about the Google + business page. Not the Google+local page.

Any user can claim and create a Google+ Business page. so the question becomes 1)how will Google arbitrate and limit that and 2)when they do merge the Google+Local page into the Google+Business page which business will it be assigned to?

+Mike B. Correct. I was able to claim several of my merged listings this way. We will see if they finally un-merge after a year now! 🙂

I’m one of the Product Managers on Google+ Local. Thanks all for reporting this issue – the offending photos from the Google local +page have been taken down.

Note that everyone can report/flag such photos – click the photo in question, and at the bottom there is an ‘Options’ menu. Click on that, and you’ll see ‘Report photo’.

If you have any questions about this, or any comments/feedback on Google+ Local, feel free to email me directly – fdelgado@google.com

Thanks for 1)taking down the photos 2)informing how to suggest a photo be taken down and most importantly 3)stopping by and keeping us informed.

Oh and thanks for taking the photos down. Curious were they done by a real user with a real G+ account?

Mike: happy to answer questions or help with product issues in tue future.

The photos were indeed uploaded by an actual G+ user.