Google Places Reputation Management: From G to X Rated in No Time Flat

One of the basic tenets of reputation management in local is that regular visits to your Google Places page are necessary to prevent (or perhaps mitigate) disaster. You never know when a competitor, an ex-employee, an unethical SEO or a prankster might just deface the page. And of course you no have idea when Google, The Machine from Mars, might take a shot at the page as well.

Google Places has been on a push to include more photographs on the Place pages, grabbing photos from all over the web and placing them prominently on the Place Page. In the case of Center for Restorative Breast Surgery in New Orleans, LA, Google dug deep into their website for photos that the owner obviously felt were not meant to be any place but… deep on their website.

As Google scrapes sites for photos far afield from the managed environs of the directories and review sites these sorts of problems will increase in frequency. Fortunately the account is managed by Paula Keller at SearchInfluence and her response was swift. She immediately reported the images as inappropriate via the Google link and more importantly uploaded a raft of new photos to the Places dashboard to push the offending images off the page.

WARNING: THE FOLLOWING IMAGES MAY NOT BE APPROPRIATE FOR ALL VIEWING AUDIENCES 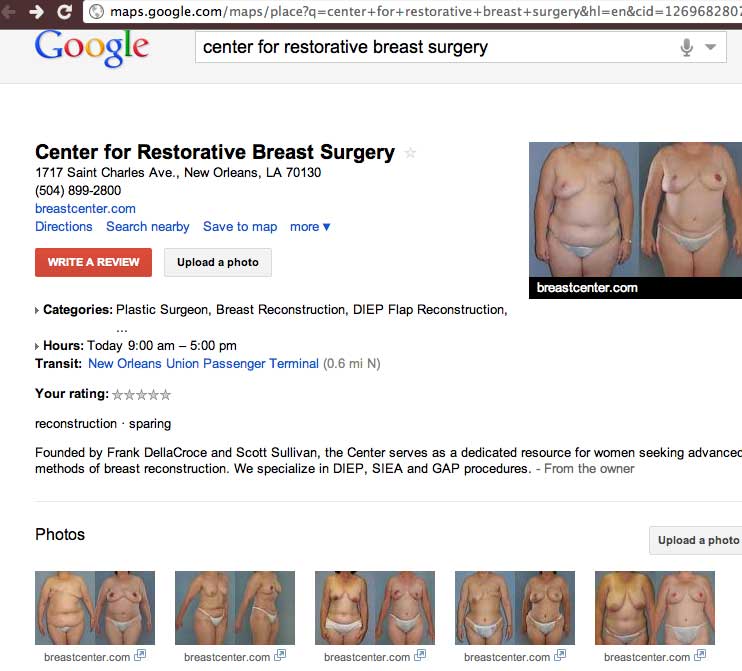 Mike / Paula, I’m curious…were you able (or perhaps a better question–WOULD you have been able, had you not “reported a problem”) to get your own photos to supersede the ones that Google scraped? This seems to me to be the lesson for business owners AND for Google on this one:

#1 Google (yes, readers, I know I’m shouting in the wilderness here) — Stop treating the Place Page as wholly YOUR content. One of the reasons so many business owners are more engaged with Facebook than they are with you is that (save for Wall comments from fans), they get to decide what shows up. I get that you want to get as many Places reviews as you can and shut out the Yelps of the world, that seems fair. Places reviews are basically equivalent to Wall comments. But stop hiding business owner descriptions, showing nearby places they WON’T like (aka competitors), overwriting their verified data with crap from third-party sources, and for goodness sakes, let them choose thumbnail images associated with their own business.

#2 Business owners — Make sure you upload ALL available photos which you’re allotted to. Hopefully a “full shelf” of owner-submitted photos will prevent this in the future.

Thanks for this post, this will help a lot of businesses. I couldn’t agree more with David on both of his points. I could only add in my view that Google should add clarity to the process so, business owners can know in advance how to avoid these problems.

Already added the photos deal to best practices, but perhaps a stronger sentiment is required – nobody ever provides enough images. Thanks for the reporting. DEMAND photos from clients or else they could suffer the same fate!

That would be disasterous for the health-related professional svcs…imagine this, you’re searching for a new dentist in town, click on a prominent Places page with numerous reviews, only to witness shock and awe in place of an engaging geotargeted environment.

One sight of jacked up bloody teeth or gums, and its lights out for that dentist – with respect to the search/conversion…new patient.

Consumer moves on, thinking the SMB actually OWNS or CONTROLS the Places listings…and goes away with the impression of how THEY (dental ofc) were stupid enough to make those photos public.

As a whole, consumers generally think the business represented went ahead and uploaded the published photos, not Google by some contrivance of circumstance.

@David
Your suggestion is a good one although I am not 100% sure that it will prevent this. I will ask around.

@Mark
Communicating clearly has not been Google’s hallmark but they do seem to be improving under the new management. In this case they would need to put an alert by the image upload that links to this post and says in bold “Upload 10 photos or this could happen to you” 🙂

@Chris
Photos are difficult to drag out of clients. At least three as a bare minimum as Google is prepared to give each business that much space for branded searches on the front page of Google. Even then I have a hard time getting them.

Interesting article. I just checked our own cosmetic surgery Google Places listing, and it too has gone from G to X. In addition, Google has inappropriately selected images from our site that tell stories but aren’t representative of what we do… note the image of celebrity chef Gordon Ramsay!

@Dr C
Hmm… this problem may be more prevalent in your industry than I suspected.

Thanks for the link.

We did upload the max 10 images and pushed the nude images off the main Place Page view. We reported the images as inappropriate, and we see today those images removed from the main listing, but not all from the individual surgeons listings.

When do bugs become swarms? I think that point is fast approaching 😉

BTW, for Dr. Bunks, I would point out that the only category on his page is hypnotherapist. I’m guessing that’s something that needs to be addressed as well.

@David – We were able to make our own images push down the others. This is a newly claimed Place page and we had not yet added any of our own photos through the LBC, so once we did add them, they pushed all the auto-pulled ones off the first page of photos.

You may be interested to know that our Google Places account has been suspended. In addition, the places page that displays indicates that I can claim that business. I’m guessing that as my account is suspended, Google does the automated thing… extracting photos from my website, and inventing a profile.

I’ve contacted the Google customer service center (for Adwords), and they have promised to look into it…

I have a similar problem with a client listing (a carpet cleaner). It keeps pulling a picture of a dog peeing on a rug. When you click the thumbnail to view the pic in full screen the full screen pic has a hyperlink to a competitor’s website.

I click “inappropriate photo”, fill in the details, and the image vanishes for a month… but then it comes back.

We have tried submitting a bunch of our own picks but this other one keeps showing back up. What is really annoying is it is tagged as “Submitted by Owner”.

@Mark
It could be caused by “cluster confusion” or possibly merging of the two clusters. For some reason the Google algo is confused.

We also had the same problem, where it keeps showing images from our old site even though they have been deleted from the server ( i double checked), its not a great situation as a couple where holder pictures.

It really is a pain, as far as i am concerned if you set up a profile then google should not interfere.

Google needs to keep their grubby hands off of business owners listings and let them manage it themselves. This is completely epic fail on Google’s part. I can’t imagine the potential reputation loss for a local business in the situation described in this post! What if the business owner was clueless about a listing Google scrape and created for them, and then put photo’s on the listing as mentioned here. Completely uncalled for!

Google has a fiduciary responsibility which in this case they have completely failed on. They have no rights to the photos on other peoples web sites so they have no business scraping the information and inserting it into peoples listings without prior consent. They are doing EXACTLY the same thing they complain about.

Mike: If you are going to speak about reputation management in Google you might want to highlight what occurred on the Google Places Page of Max’x Delicatessen in Birmingham, Alabama.

Following the passage of a law in Alabama that enables the police to check the identities of people, enabling them to search for illegal immigrants, Steve Dubrinsky, the owner spoke out locally, expressing his views on the legislation, and the difficulty it will cause for certain businesses.

His comments were addressed in a local radio station which contemplated boycotting his restaurant. Immediately thereafter his Google Places Record was slammed by a large number of Attack Reviews.

Subsequent to that he received a larger number of support reviews:

Here is the Google Places Record:

You will have to dig deep to find the start of the attack reviews, starting on October 13. It appears there have been a total of 140 reviews as of this time, in the 11 days since this situation started.

The reviews are either: the worst place ever: or the best place ever.
Obviously it has distorted the review mechanism.

The Huffington Post picked up this story a few days ago: http://www.huffingtonpost.com/2011/10/20/alabama-immigration-law-deli-owner_n_1022535.html

Supposedly Google has a filter that removes political reviews. Moreover it has policies that ban attack and hate reviews. Go back to October 13 and you will see a slew of hate reviews. The attackers have attempted to intimidate the owner and anyone else who speak out against this law.

The filter isn’t working. Google has not removed the attack reviews nor the support reviews. By allowing the attack reviews to remain, it supports efforts to politically intimidate people and subverts the basic tenet of freedom of speech.

Its more than “reputation management” By not responding to the slew of hate reviews Google is supporting the worst elements of humandkind,

[…] has been on a tear of late in local to gather photos and display them on your Place page. One assumes that this effort is on going in other topical areas as […]